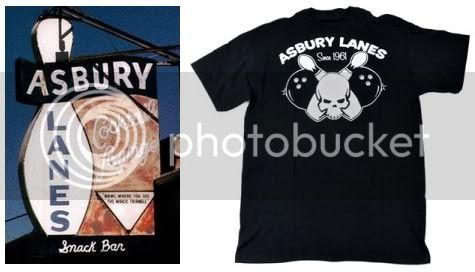 Pictured above is the official Asbury Lanes T-Shirt, which is available for an affordable $15 bucks at this link: http://www.asburylanes.com/merch.htm

There were a few requirements I had when determining what to do on Halloween night. New Jersey offers an endless amount of options from costume parties to haunted houses, and like Clark Griswold I wanted to ensure the optimum amount of fun for The Sexy Armpit crew.

What were my stipulations? I didn’t want to spend $10 per drink, I didn’t want to drive too far, but I did want to be in a place where I would be recognized for who I dressed up as: the early ’80s version of Macho Man Randy Savage and my girlfriend was Miss Elizabeth. If I went to some snotty upscale place, and believe me, there’s many of those to choose from in Jersey, I would be looked down upon. I like to go places where I feel like I fit in. I narrowed my search down to The Berkeley Oceanfront Hotel which was offering The Shining: Red Rum, Red Rum Party, which would have soaked me $50 bucks at the door. My budget was basically non-existent, so I scratched that one off real quick. The hefty entrance fee was justified though, since winners of their costume contest would win big prize money: Best costume won $1,000 cash! Still, I opted for something more affordable, and more my style. Ultimately, I wound up merely a few blocks away.
In association with Paranormal Books, Asbury Lanes held The Bloodlust Ball. The masquerade’s cover charge was only $15, which included entertainment, snacks, and Halloween candy. For those who haven’t been there, you also have the option to bowl some balls. The vibe was very cool and I knew we were in for a great time as soon as we sat down at the bar. The drinks were priced very reasonably so you wouldn’t have broken your bank if you were out to get tanked. We caught a few minutes of the Yankees game and then I was recognized, “Hey look, that guy is Macho Man!” Throughout the night we received compliments on our costumes and praised other awesome ones as well! We ran into Emma Frost/White Queen, Inigo Montoya from The Princess Bride, and even Charles Manson and Sharon Tate. We had a blast and I definitely made the right choice!

Two aspects of The Bloodlust Ball set it apart from the rest of the parties I could have attended. First, DJ Jack the Ripper spun hours of retro ’80s tunes and cranked out tracks that I also have on my iPod like Prince’s “Sexy M.F,” and Whodini’s “The Freaks Come out and Night.” Did I mention the burlesque performers? Our host for the evening was the wickedly entertaining Weirdee Girl, who usually performs in Brooklyn and other venues in New York. Every hour she introduced other burlesque performers, all of whom presented their own unique show. The second performer, Justina Flash of The Gyronauts, put on quite a spectacle. Take a peek at what she does with a flaming hula hoop in this video: