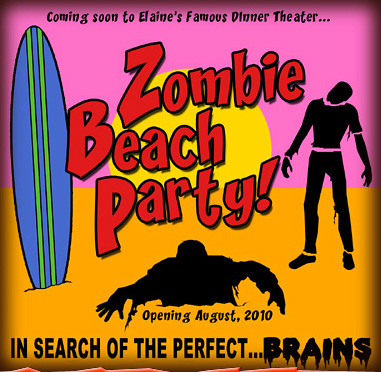 Don’t give me that crap about summer being over! There’s still time to sneak down to The Jersey Shore and don’t worry, in Cape May you definitely won’t run into Snooki or JWoww. You’re exempt if you live too far away, but if you are within a reasonable driving distance you MUST venture down there to experience Elaine’s Dinner Theater. Miss Sexy Armpit planned it all and surprised me, and I was skeptical at first, but I already want to go back!

Elaine’s offers such a unique night for those who appreciate superb food and live entertainment. The entertainment isn’t a burlesque show or a male revue either, but it does offer lots of laughs and a taste of the macabre. I was in luck because the show I witnessed had zombies, surfing, and even some magic mushrooms. 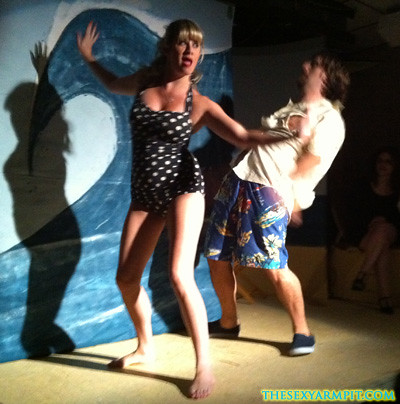 The Zombie Beach Party was a fun throwback to the ’60s beach movies starring Frankie and Annette, only with a horror comedy twist. Think of it as Off Broadway…160 miles off Broadway. A couple of the actors played multiple roles, but that’s one of the most entertaining aspects of the production. The cast clearly loves to perform since they were having a blast up on stage. After inhaling an unbelievable meal and kicking back and laughing at the great stage show, I couldn’t believe what a great time I was having.

The entire cast was extremely talented and had excellent comedic timing. The main character, Jeanette (pictured surfing above), not only made me laugh the entire time, but she also created such authentic mannerisms. It was as if Judy Garland killed some brain cells and started hanging out with the girls from the movie Clueless. Her singing voice was so precise during her performance of “Be My Baby” she sounded exactly like Ronnie Spector. 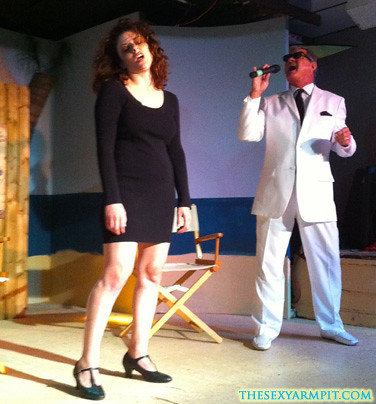 Dinner Theater seems like an old fashioned concept, but Elaine’s has brought it back. People want something fresh and sometimes it doesn’t have to be revolutionary, but perhaps just an existing idea re-imagined. For example, movie theaters aren’t bringing in as many people as they used to because of ticket prices, on demand, and the sweet home theater they have set up in their living room. The fancy AMC Fork and Screens are morphing theaters into movie theater/restaurant hybrids in hopes of attracting more business. In this landscape of sitting at home watching blu-rays, going to a dinner theater was an enjoyable change of pace. 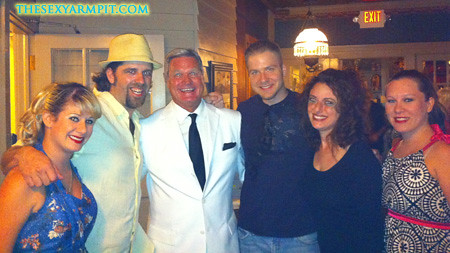 Included with your reservation is a full course dinner and then when you are nice and full, the show begins. To start off, I had Cream of Broccoli soup and then the amazing Eggplant Roulade for my main entree. For the price, Elaine’s Dinner Theater is an unbeatable night out.

In addition to their Dinner Theater, Elaine’s also offers a haunted mansion, murder mystery weekends, ghost hunters weekends, and ghost tours. Beginning in November through December, Elaine’s will be presenting Scrooge The Musical.