Here’s a Halloween themed meme started by our friend Becca at No Smoking in the Skullcave. Visit Becca’s blog and shop when you’re through here! Feel free to join the meme and answer and post on your blog!

1. What is the worst treat to get when trick-or-treating?
For me, the worst was any hard candy or stuff that stuck in my teeth. I especially hated when I got sugar daddies that were hard as rocks.

2. What character from any horror film would you most like to play?
Sammi Curr, and even though it’s not truly a horror film, Riff Raff from The Rocky Horror Picture Show.

3. Would you rather be a zombie, alien, or psycho? (why)
Definitely a Psycho…because there’s probably less work to put into it. Not a lot of makeup or costume shopping involved. Psychos are usually low maintenance!

4. How many Halloween, Friday the 13th, or Nightmare on Elm Street movies combined do you have on DVD?
Hmm…let me think. I own every NMOES including Freddy vs. Jason as well as F13 part 1,2,3,4, and 6.

5. What is the scariest movie you have ever seen?
I don’t get scared easily since I started watching horror films when I was about 4 or 5. My parents were cool with it. How can you tell a kid who loves Freddy Krueger that he can’t watch the movies? My friends weren’t allowed, but I was!!! I am more creeped out my psychological and atmospheric thrillers and horror films with less blood and gore and more mindf*cks. I’d say classic films like The Shining, 1984’s Nightmare on Elm Street, The Exorcist, Poltergeist and newer stuff like The Blair Witch Project and Lake Mungo.

6. Lamest costume you have worn on Halloween?
For my first Halloween my mom dressed me up as one of Santa’s helpers, but that was completely involuntary. I wish I could go back in time and tell my mom that it was totally the wrong month for that. 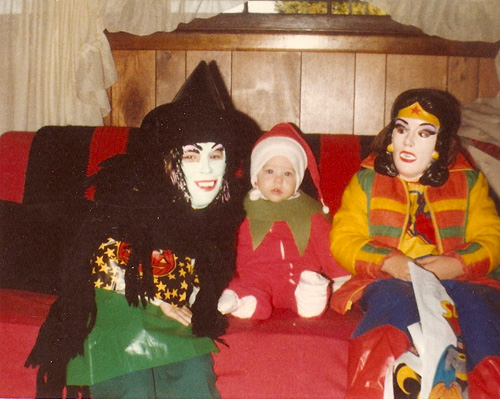 7. Favorite Halloween treat?
A king size Snickers. To me, that was the grandaddy of all Halloween treats. And actual Reese’s cups, not the fun size ones.

8. Friendly-faced jack o’lantern or scary one?
SCARY!!! The more sinister the better!

9. Have you ever had nightmares about a scary movie character chasing you?
If I did, I don’t really remember. I was never so scared of a horror movie character to the point where I’d dream about them chasing me.

10. Best thing about Halloween?
The weather, the atmosphere, the jack-o-lanterns, horror movies, the costumes, the parties, the house displays/decorations, and the memories.

11. Strangest Halloween custom you’ve heard of?
Plenty of people I know basically ignore the Halloween season altogether. That’s not fun at all.

12. Person in your family who most likes Halloween (not counting yourself)?
Believe it or not, no one in my family really loves Halloween like I do, of course my little niece and nephews like it because of the candy, but not so much the haunting aspect of it. So, I’d definitely say my girlfriend since she loves it and she’s definitely part of The Sexy Armpit family.

13. Are you superstitious? If so, name at least one superstition of yours.
I always seem to say that I’m NOT superstitious but I think we all are a little bit superstitious. There have been countless times that black cats have ran across the street in front of my car while driving, probably more often than most people. Oh, and I DO have a rabbit’s foot and I love the Stevie Wonder song, so I guess I actually am superstitious.