I welcome any appearance of The Jersey Devil in all facets of media. JD has been the subject of a few films such as The Last Broadcast and 13th Child, but The Jersey Devil has yet to leave a mark in Hollywood. 2009’s Carny, was a step in the right direction, but not the badass horror flick that seemed to be depicted on it’s DVD cover. This was an RHI production (formerly Hallmark) which usually stands for low grade fare, but that didn’t bother me, I am a salivating beast constantly hunting for more Jersey Devil stuff to watch, and it started streaming on Netflix a while ago so I gave it a shot. I saved my thoughts for the Halloween countdown since it’s always best to let a movie sink in before I go writing about it irrationally.
The film begins in a small town, in of all places, Nebraska. The town is preparing to host a traveling carnival. While setting up, the carnival is derided by towns people as “the work of the devil.” The circus freaks are out in full force and so is the Jersey Devil. “What the hell is he doing in Nebraska?” you might ask. Well, it sounds like he took an insanely wrong turn on Route 287 if you ask me. The Jersey Devil is caged and on display for all to see and gawk at as part of the Carnival. That is until…he escapes and goes ballistic. It becomes The Jersey Devil versus the circus freaks and random towns people. The honorable and heroic cop, RICHIE!, ahem, I mean Lou Diamond Phillips, gathers his group of cronies to rid the town of the creature while the local pastor vows his own revenge on it for killing his son. 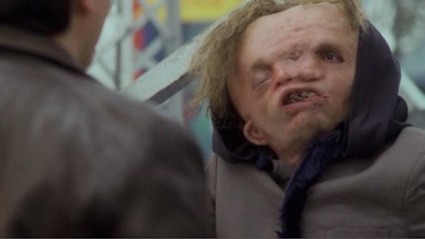 The Jersey Devil has become such a popular cryptid that creative license has caused him to terrorize other places besides strictly New Jersey. This defeats the purpose of the character. In Mystery of the Jersey Devil by Calu & Hart, The Jersey Devil is found to be a spirit meant to ward off anyone who hinders the growth and ecology of the stretch of rich Pine Barrens in southern Jersey. It might sound boring but that is one of the actual theories of why the legend exists. Putting him in another state as part of a traveling carnival is just plain wacky.
There IS a surprise ending. The keystone cops show up, and all of a sudden JD gets incarcerated in the local jail and gets shot with what seems like a pop gun several times. I remember hearing the line “I have slayed the beast…” seriously. There’s more after that but I’ll let you be unfulfilled for yourself. And stay for the closing credits where you’ll be serenaded by a bluesy rock song, “Pray For Dawn,” written and sang by RICHIE!, I mean Lou Diamond Phillips. 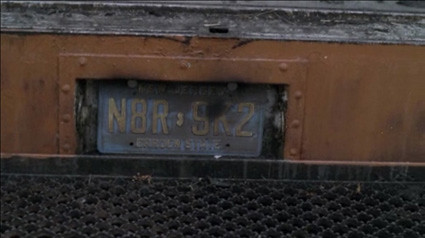 It must have come from New Jersey! – Garden State License Plate
You may think it’s a stretch, but the film does actually mix elements from the original King Kong and Universal Frankenstein films but it’s obviously nowhere near as good. The script could have used a little bit more humor instead of taking itself so seriously. DVDTalk.com has compared it to the ’80s horror vibe of “Friday the 13th The Series or HBO’s Tales from the Crypt,” and though I see the comparison, it’s not as imaginative or creepy as some of the aforementioned series’ best episodes.
The Jersey Devil’s look is pretty faithful to the way we know him, but he’s actually never been uglier or more ferocious. A beast like this could only be born in Jersey. In a review he posted at AssociatedContent.com, Kevin L. Powers said the film had “subpar CGI effects,” and I disagree. I don’t know the budget of the film, but the devil did not look cheap at all. Obviously, Powers doesn’t understand that for a movie of this scale, he can’t expect it to have Avatar-like CGI.
You’ll notice a lot of fake blood. When someone gets punched they spit a gallon of blood out of their mouth. The whole time I just wanted to yell RICHIE!!! and see Lou Diamond Phillips completely stop what he’s saying to look through the TV screen toward me and throw up his middle finger. He didn’t have the balls though. Not a bad film for someone who loves low to mid grade horror and the Jersey Devil legend during the Halloween season. Or if you’re just a fan of stock footage of people eating popcorn and riding ferris wheels, this is destined to be your part of your DVD collection.
A truly creepy Jersey Devil movie has yet to be made. It’s surprising too because that’s an urban legend whose story is deserving a seriously scary adaptation. Hopefully when one finally does get made, it will be filmed in New Jersey, not Canada. If you have no patience for this kinda stuff go find a few bootletg copies of Carnie!, Carnie Wilson’s ill fated talk show, now that was way scarier.
www.SexyArmpit.com