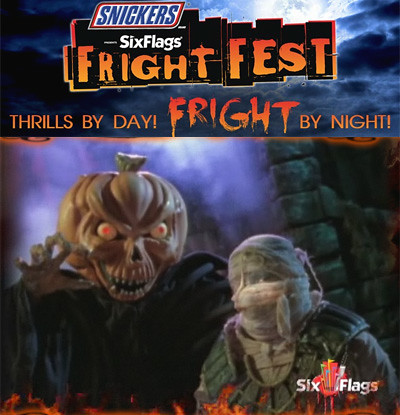 Amusement parks are generally associated with summer, but for me they are more of a fall tradition. The crisp, cool air in October makes it a perfect time for rides and roller coasters while strolling leisurely around the park with your special someone. What’s also good is that you won’t get swamp ass or heat stroke from walking around in mid summer in the blazing Jersey heat. But those aren’t the only reasons of course, the main attraction for many of us in New Jersey is FRIGHT FEST at Six Flags Great Adventure.

Fright Fest is celebrating it’s 20th year and as old as it makes me sound, I’ve been going there way longer than Fright Fest existed! So I’m not a kid anymore, but as I was saying, amusement parks, especially haunted ones, have always been a part of Halloween time for me. Nothing beats the ability to go on thrill rides on a cool, starry autumn night. Six Flags Great Adventure’s Fright Fest captures this feeling perfectly thanks to their team of actors adorned with amazing masks, makeup, and costumes who go lurking around the park creeping everyone out. While this sounds like a blast to me, it’s not for everyone. It’s simple, if you don’t like being scared then don’t go. For families worried about their kids being scared there are plenty of Ghoul-Free zones designated for the faint of heart.

We kicked off October with a trip to Fright Fest. Miss Sexy Armpit gets scared when I start clapping abruptly when the Giants score, so naturally she wouldn’t be able to handle actual scares in something called a TERROR TRAIL. “Which hayride do you want to go on?” I asked her. Of course she replied with “the least scary one.” She got her wish because we wound up on Haunted Wagon Tales, the children’s haunted hayride, listening to songs like “The Addams Family” and “The Flying Purple People Eater,” while waving like dorks to friendly versions of Frankenstein, Dracula, and a so not scary swamp monster. When we answered riddles correctly such as “Who did Frankenstein take to the prom? His GHOUL friend,” then our hayride guide tossed us free candy. Would I have preferred to walk through one of the scarier terror trails? Yes, but it was one of those October nights that I love so much that it didn’t even bother me. 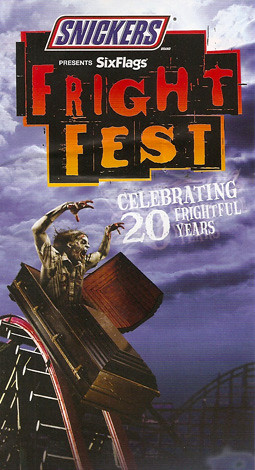 This year’s Fright Fest attractions include terror trails, haunted hayrides, and live shows. Here’s the list: The Haunted Heist, Project XI Mortuary Manor, The Demented Forest, Dead Man’s Party, Escape from the Asylum, Hypnosteria, Fright Fest Freakshow, and The Ghoulmaster’s Ghosts and more. One of the coolest and possibly most underrated part of Fright Fest is the Dead and Local Music Showcase where local rock bands take the stage throughout the night. A couple of years back we had the chance to see an awesome KISS tribute band, and last year Sludgey’s favorite band SCARLET CARSON played as well!

The iconic fountain that you see when you first walk into the park is spraying red water indicating that you’ll have a bloody good time. If you’re planning your Halloween related events, then make sure you round up your friends or significant other and feel the thrills and chills of Fright Fest at Six Flags Great Adventure!