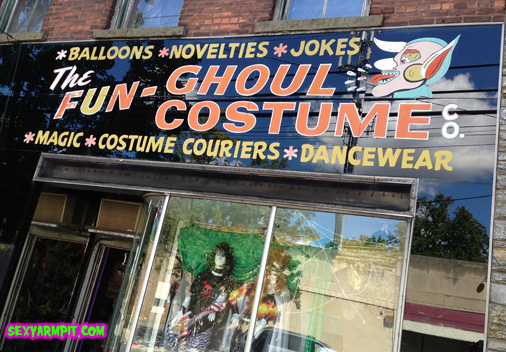 In my last post I recapped the NJ KISS Expo, but that wasn’t the extent of our adventure that day, nope, not by a long shot! It was a gorgeous Saturday and there was much more to do. Next on the agenda was a place that falls right in line with the Halloween Countdown!

Not often will one of my posts feature a title inspired by one of Rizzo’s lines in the movie Grease. If there are any Pink Ladies out there, savor it while you can. I’m always a sucker for a cheap double entendre, but I’m also a sucker for a good old fashioned, brilliantly named costume shop, and for 26 years the Fun-Ghoul Costume Shop in Rutherford, NJ has been all that. Checking this place out has been on my agenda for a very long time, but over the weekend we finally took a trip there.

I had no idea what to expect from this place before going in. As I mentioned, I’ve heard of the place, but it wasn’t like anyone ever recommended it to me. I’ve seen ads a long time ago in Weird NJ (at least I think I did!), but other than that I was going in blind. All I knew is that they sell costumes. Judging by my Apple maps, I didn’t even think the place existed anymore since it kept bringing us to the same address in the next town over. For a good 10 minutes I was absolutely convinced that this place had become a chiropractor’s office. The Fun-Ghoul Shop is located at 155 Park Ave in Rutherford, but we kept getting directed to 155 Park Ave in Lyndhurst which is exactly a mile away. It was frustrating, but by the time I became officially fed up, we’d finally found it! 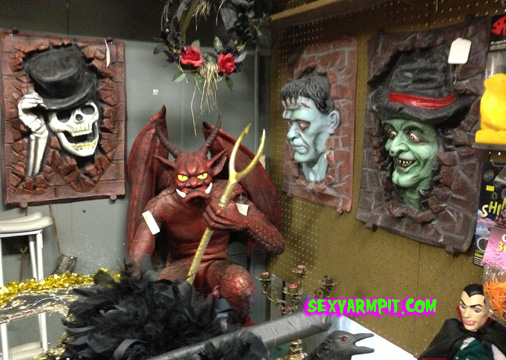 While walking up to storefront, My friend L.C and I agreed that it felt like we might have been headed into the Magic Shop in Pee Wee’s Big Adventure. Upon entering we were greeted by an employee who offered his help if we needed anything. Things weren’t incredibly organized, but the place definitely had personality. I saw a few animated Dracula statues, mannequins, and some random masks and wigs around the store, and it was pretty cool, but I had this feeling that there had to be more. The shop had a healthy stock of costumes, but it wasn’t anywhere near as vast as a Spirit Halloween store. It’s unfortunate, but the Spirit stores are like the Wal-Mart and Targets of costume shops and they don’t give local businesses much of a shot. In Fun-Ghoul’s case, they’ve survived because they diversified and they’re open all year long.

See, it’s not just a costume shop, the Fun-Ghoul footprint spans 3 connecting storefronts on Park Avenue. I knew there was more to this place! The tall gentleman who greeted us began chatting with us about what kind of costumes we were looking for and I explained that for a long time I’ve wanted to stop in to see what their place was all about. Then I asked him what was in the other adjacent shops.

I didn’t think it would be anything too offbeat like a taxidermist or shrunken head supply store, but I admit the possibility of that was there. Once I probed a little bit, the guy told me that he was asked to work the 3 shops all day. I sympathized with him and said “So that means you have to walk back and forth to the stores and lock up after you leave each one?” He verified that was precisely what he had to do. Knowing that info, you’d think I would leave the guy alone and not make him go crazy, but I was so curious to see what was in the other shops. “Can you take us into the other stores?” Yes, I was that annoying guy who’s bothering this dude on a beautiful Saturday. 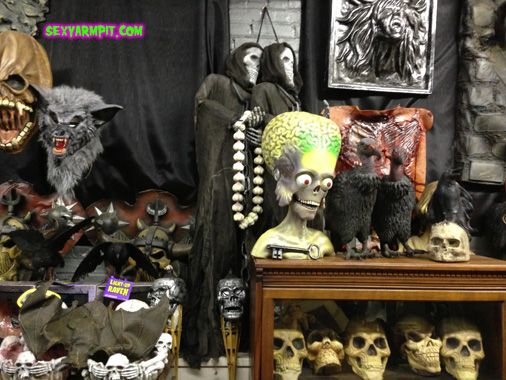 It was early afternoon and neither the town, nor its stores seemed to have many people around. Fun-Ghoul was empty when we got there, so it gave us ample time to walk around and snap photos, something I may or may not have been allowed to do. Thanks to our Times Scare fiasco, I now have an irrational fear of using a camera. Plus, I didn’t feel as bad basically asking for a store tour.

“Before we ask you to lock up and take us in to the other shop, what do the other stores sell anyway?” He explained to me that they have the costume shop, the costume rental shop, and…a PROP shop. My ears must’ve perked up as if I was a dog because the idea of a prop store piqued my interest.

“Oooh can you take us into the prop store?” I was like a little kid. He locked up and brought us over into the other store. Upon entering I thought to myself “this is exactly what we came for.” Picturing this place in your mind isn’t difficult. Think of your neighbors half finished basement filled to the brim with the most random and elaborate Halloween decorations ever. That is this store, and it was glorious.

The first thing I noticed were the two humongous Oscar statues. Not everything was Halloweeny, but the majority of it was pretty macabre as you can gather from the photos. Everything was for sale. I didn’t ask for pricing on anything because I just unloaded a wad of cash earlier at the KISS Expo and I knew the day wasn’t over. As I stood in awe snapping 650,000 photos, I noticed our store employee was nowhere to be found. Our friend L.C said “Hm, what’s back here?” and I looked toward the back of the shop where I saw an open doorway that let a dim light peek out. L.C started to walk toward it.

Still unaware of where our shop employee vanished to, I cautiously shouted “Is it alright if we go back there?” And I heard him say “Yes, come back here.” It was time for a Shaggy and Scooby-style GULP. His voice sounded like it was coming from the back room which indicated to me that he was just waiting for our curiosity to lead us there.

Fearlessly, I walked toward the doorway. Once inside, it all made sense. I knew a place like this must have had a secret room or something. It was right out of a movie. The room was like a dark ride without the boat ride. It’s like a mini-haunted walk through that must be seen to be believed! I don’t know if I’m just not hanging out with the right circle of friends or what, but I’ve lived in Jersey my whole life and never once heard about this. I guess it’s just something you need to stumble on yourself, but if I hadn’t asked the nice guy at the store if we could check out the other shops, we would’ve left having seen only a costume shop.

I didn’t even ask to go into the costume rental part of their store because I felt I reached the pinnacle of what they had to offer. Besides, there were Smurf heads, Easter Bunny, and Frosty the Snowman heads with their respective full body costumes neatly organized for people to rent. It’s kind of creepy when you walk by the storefront and see the heads staring back at you through the window. Totally different experience when someone is wearing one and taking pictures with children.

I didn’t make a purchase at Fun-Ghoul, but it was well worth the confusion of getting there. If I ever need a sarcophagus or a squishy, life-size alien body for a staged autopsy, I know where to go. More stores need employees that lure you into secret rooms that spontaneously transform into haunted attractions after switching on a black light.