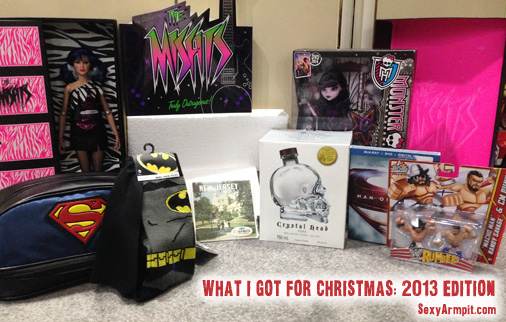 The years of wondering why Santa didn’t bring me something I asked him for are long gone. Back then, I made it known once Christmas was over that I still wanted that one specific thing or multiple things that weren’t under the tree on Christmas morning and it became my mission to get them.
For the past several years, with the magic of Amazon and other online stores, I usually wind up buying more shit the day after Christmas then I did before and during the season, but only online. I really wouldn’t set foot in a store on the 26th, especially in Jersey – where our new state motto is “Where EVERYONE Comes to Shop.” With the ease of finding and buying things on the Internet, there’s rarely anything I can think of that I absolutely want for Christmas. If I’m buying crap all year long, chances are, as the Joker said in the ’89 Batman, I “…bought it already.”
I provided no actual wish-list to anyone this year. There’s a ongoing one in my head, of course. Usually I like to post my wish list, so maybe I’ll follow this up with a “What I Didn’t Get For Christmas” post. For now though, let’s take a look at all the cool stuff that Santa, Miss Sexy Armpit, and the rest of my family, loved ones, and friends gave to me for Christmas. Keep in mind that I won’t touch on every single thing because that would be boring and excessively long.
Pictured above, you’ll see a pair of socks. Socks are just something that I never look at as a good Christmas gift, but you slap a Batman logo on them and their very own cape, suddenly Miss Sexy Armpit sees them as a “Jay” gift. Then we have a Superman travel case and a bottle of Crystal Head Vodka. On the right we have Man of Steel on blu-ray as well as a WWE  Rumblers pack, which I picked up for myself, including Randy Savage and CM Punk.
I also bought the New Jersey View Master set from the late ’50s for myself on eBay. If I remember correctly it was only $6 bucks and it’s in mint condition.
Turning your attention to that awesome Monster High doll in the back, it’s Elissabat! From what I read about the news at SDCC and saw in person at NYCC, technically, Elissbat was slated for a Spring 2014 release. She started appearing on shelves in Canada during late November and then different parts of the country, but I personally still haven’t seen her anywhere yet. I don’t have the patience to search shelves and drive all over creation for a doll, so if I can get it on ebay without all the fuss, that’s what I do – and did. The elusive Elissabat is now mine!
If you don’t think I’m a full-on female at this point, there’s a Misfit in the back too! It’s Stormer. Miss Sexy Armpit knows that I take my women like I take my Misfits – with a rotten attitude and blue hair. 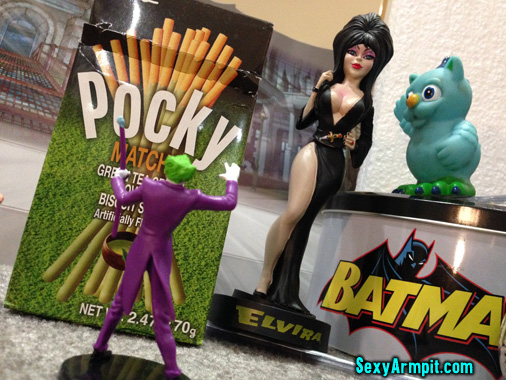 I’m a fan of Pocky, but I couldn’t find the Green Tea flavor so I ordered a box online at what I think may be 3 times the price. Warning to you: if you like Strawberry or Chocolate Pocky – the Green Tea Version is for Green Tea lovers only. Joker wanted some Pocky while Clarence was mesmerized by Elvira’s boobs.
As stated, some of these items were purchases from The Sexy Armpit to myself. C’mon, tell me you don’t buy yourself at least one gift for every three you buy for others? Isn’t that the unwritten rule? How else would we ease the stress from all the traffic and bickering and LINES?

Bouncin’ Babes Elvira was something I bought because well, I love Elvira. It actually was pretty cheap too. I think it was $12 bucks. The one bad thing about it is that she doesn’t stand up properly. It’s as if she’s permanently hunched over. Maybe that’s why it was marked down.

During one of my shopping excursions, I went to a local dollar store. There really is so much garbage in those stores. That’s not to say you can’t get a few good buys here and there, but overall they are a total wasteland. Did I need all these DC universe figures? No, but I bought them anyway.

These miniature DC Universe, um, let’s call them “plastic statues,” were deceiving. They immediately reminded me of the die-cast Batman and DC line of figures by Ertl that were available in the ’90s, only they were clearly NOT die-cast. 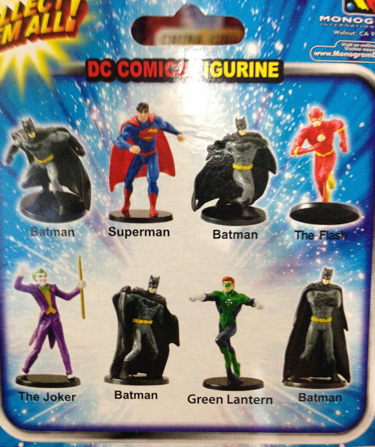 Batman and The Joker are worth owning because they look halfway decent, but the rest of them are pretty hideous. The paint jobs are f*cking shit. Superman has a receding hairline, Flash needs a knee cane to hold himself up in his running stance, Green Lantern looks like he rolled around in a Chinchilla dust bowl for 6 1/2 hours then decided to cozy back up into his blister pack.
As it always is, the photos of the figures on the back of the package look amazingly vibrant and detailed. Notice there’s 3 versions of Batman. Even for a dollar each, we know who’s really bringing home the bacon at DC. 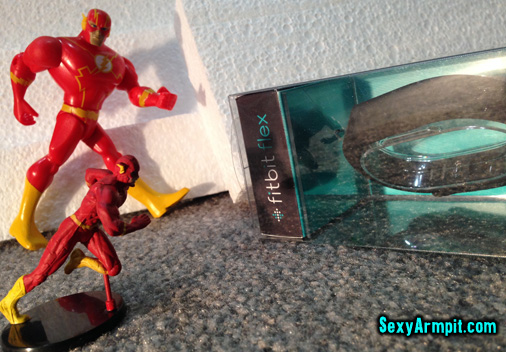 When the holidays aren’t causing upheaval to normal routines, I’m usually able to get to the gym a couple of times a week. It’s not as much as I’d like, but it’s something. I’m hoping this FitBit helps motivate me for more exercise. I just have to beat The Flashes to it. Thanks Miss Sexy Armpit! 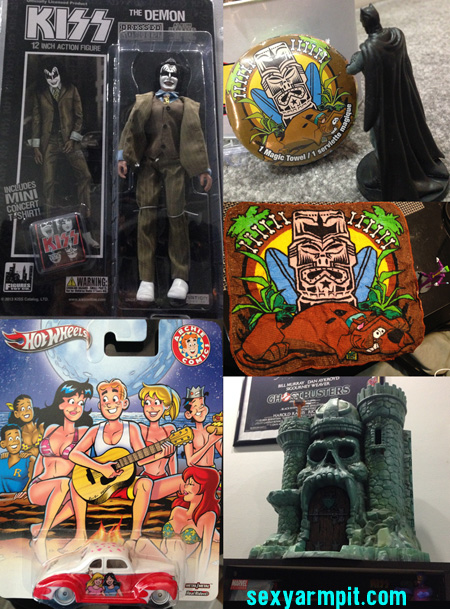 Appearing in this last collage, you’ll see a giant Dressed to Kill era Mego Style Gene Simmons doll. I preordered this guy a while ago and he arrived in time for Christmas. It’s the type of doll a KISS fan only dreamed about since 1975. Considering that I dress in this style often, it’s pretty special. He now hangs on my living room wall beside the giant Hotter Than Hell era Gene Simmons doll that I got a few years ago.

Underneath the debonair Gene Simmons doll, there’s an awesome Archie Hot Wheels. This is the Betty and Veronica 1940 Ford Coupe. It’s highly possible I’ll be looking out for a few of the others in this set.

It turns out that Batman was fascinated with the stupid magic towel that I bought at the dollar store. Scooby Doo and a Tiki statue were enough to sell me on it. If you had the ability to manufacture and sell a product that was virtually MAGIC…there’s almost zero chance that it wouldn’t be a TOWEL, right? For human beings, this is a wash cloth sized towel, and for Hodor from Game of Thrones, it might as well be a speck of toilet tissue he dabs onto a nick on his face after shaving. It would seriously be magic if the contents of a package this small could turn into a full size body towel. That’d be some serious Shazam shit right there. Can you think of anything more un-fun for a child than a dried up towel that takes literally 7 minutes to actually become a friggin’ towel?
After waiting basically an entire year and dealing with a lot of crap from Digital River, Castle Grayskull was delivered a couple of weeks before Christmas. It definitely wasn’t an impulse buy that’s for sure. I even bought a shelf (a.k.a throne) to majestically display it on.

In addition to all the stuff pictured, I got a new set of luggage, a Superman hoodie, and gift cards to iTunes, Amazon, and Starbucks among other things. I appreciate all the gifts I received this year and I thank everyone for an awesome Christmas! I hope you enjoyed your holidays as well!