For me, Bed Bath and Beyond has always merely been a punchline. Let’s face it, if you’re a dude, whenever you’re significant other even utters the name of the store, you probably reflexively reply aloud or to yourself internally, “I don’t know if we’ll have time.” Will Ferrell’s legendary line in Old School pretty much summed up my thoughts on Triple B. I had no reason being there, yet, every damn time I’ve been there I saw about 50 different items that I thought I desperately needed to own. In this post, I’ll bring you along with me as I explain how I dropped some hard earned cash on that exact kind of nonsense over the weekend.

First, some luscious back story. Last year, I bought myself the Starbucks Verismo. Now, I could’ve been normal and went with the flow and just bought a Keurig coffee maker like everyone in America seems to own and love, but of course not! This time I wasn’t just being an oddball, I felt like “why the hell wouldn’t I want the name recognition of Starbucks emblazoned on my coffee maker?” If they lent this machine their seal of approval, there’s no reason why this coffee shouldn’t taste like it came directly from the tap of Starbucks machine at one of the bazillion locations throughout the country. So that left me with the added task of buying the specific pods for the Verismo. Here was the dilemma: Nobody carries these silly ass things. Triple B to the rescue.

On a lark, soon after I bought the Verismo, I stopped at Triple B to see if they carried the pods. Sure as shit, they carried every single variety. Not only was I able to drive a half a mile away to get coffee, but I was also able to use the coupons they send me all the time. Things were looking up, but the savings backfired. Yes, I saved money on the coffee pods, but I still had to walk all the way to the back of the store which exposed my vulnerable purchasing senses.

In other words, I conned myself into buying a bunch of other crap.

Cruising around Bed, Bath, and Beyond is overwhelming. Some people probably walk into that place and feel they NEED every single item they see. I walk in and feel I need at least 30% of all of it. I usually can hold back from getting out of hand with the spending, but during this latest visit, I couldn’t help myself.

The location I went to was newly renovated and very enticing. Their market section reminded me of Trader Joe’s with all kinds of specialty foods, drinks, and sauces. Beverages are my weakness. I noticed they were now carrying single glass bottles of various sodas – some that I had only read about or heard about from friends. Different stores around the country stock different soft drinks, but here in Jersey, it’s the same typical crap. Coke, Pepsi, and your other familiar varieties. 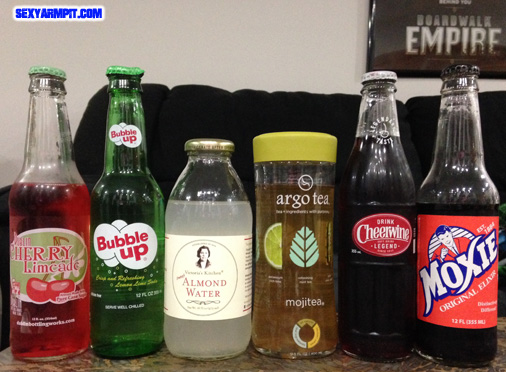 It was like walking through the Arkham Asylum of soft drinks. From left to right: Dublin’s Cherry Limeade, Bubble Up, Victoria’s Kitchen Almond Water, Argo Mojitea, Cheerwine, and Moxie.

I figured I’d tell you about how my taste test of these beverages went down. First, we’ll see if these drinks live up to their near legendary status and after that I’ll tell you about a few non-liquid items I picked up.

Dublin’s Cherry Limeade –  Pleasing color. Decent taste overall, enjoyable, but the cherry and lime flavors weren’t prominent enough for me. I think the flavor may be a bit too mellow, needs a bigger kick of lime to tip the scales. Considering that Cherry is intended to be the dominant flavor it’s pretty weak in the cherry front as well. So, more cherry with a back end zing of lime. Too much to think about.

Bubble Up – Sadly, this one is pretty much indecipherable from 7-Up or Sprite, but this one it’s made with cane sugar. At the end of the day it’s another serviceable citrus soda.

Victoria’s Kitchen Almond Water – Sounds odd at first, right? The label could be a little more appealing, but I suppose they aren’t marketing almond water to tweens. The best word to describe this drink is unexpectedly delightful. It’s refreshing, lightly sweetened, and has a mellow and smooth almond finish. If this wasn’t so damn expensive I could see myself buying it often. Since it’s really just flavored water, it doesn’t have the harshness that soda has or the syrupy mouthfeel that some other drinks seem to have. This is how you know it’s awesome: an actual ingredient is: a lot of LOVE.

Argo Mojitea – I’ve tasted Argo’s line of iced teas previously, but this Mint-Lime Mojito flavor was brand new to me. Originally, I found other flavors at a local Walgreen’s and I enjoyed 1 out of 2. They tout their all natural ingredients which is definitely a good selling point for me. Sometimes I think a lot of people forget that food and drinks could still taste good even if they aren’t made from a bevy of chemicals and artificial flavors. The Mojito flavor was a total bust for me though. The citrus overpowers the mint. I always felt that two strong flavors like mint and lime shouldn’t really be battling with each other in the first place, but, a lot of people love it. Unfortunately, this is exactly what I imagine Iced Pine-Sol would taste like.

Cheerwine – The biggest WIN of this post. I’ve always heard great things about Cheerwine from guys like my friend Paxton Holley over at Cavalcade of Awesome, but I had no idea that it would wind up going right up there in the upper echelon of best sodas I’ve ever tasted (Dr. pepper, Fanta Kolita, and Boylan’s Creamy Red Birch Beer are my all time favorites). Cheerwine is a wild cherry flavored cola and it’s everything Cherry Coke wishes it could be. It’s smooth, fruity, and doesn’t give me that sting in my sinuses and nostrils that Coke sometimes gives me. Cheerwine is made with natural flavors and cane sugar. If you can find it at a store near you, I highly recommend picking it up.

Moxie – The “official soft drink of Maine” is one of those sodas that I’ve heard of since I was very young, but never tasted. Some family members used to reference Moxie as being a soda they drank back in the day. My mind running wild and the passing of time has built Moxie up to be the stuff of legend. I always imagined it to be some sort of whacked out Coca-Cola high on opium floating on a cloud, but it’s a cloud made of white and fluffy voluptuous marshmallows that sometimes stunt doubles for Elvira’s beelzeboobs. After finally sampling some Moxie, the flavor wasn’t quite so exciting.

I’ve discovered that Moxie is the one of the few sodas that you could deliberate on with soda snobs much like wine and beer snobs pour over the details of what’s swishing around in their mouths. After a few sips and really concentrating on the taste, I noticed a wide range of flavors. It’s probably the most complex tasting soda I’ve ever had. It’s interesting because its ingredient, gentian root, gives it a bitter flavor, while its other flavors are vague as it finishes with a sort of spicy kick. I’m not looking for my soda to be some outrageous Mountain Dew flavor, but Moxie didn’t quite reach the pinnacle that I thought it would for me.

I also picked up a few snacks that fall into the dessert category.

Continuing my tradition of reviewing Marshmallow filled things, I bought a Valentine’s Day themed dark chocolate Peep heart with raspberry marshmallow filling. The prevalent raspberry flavor blended well with the dark chocolate, but, unfortunately, the marshmallow wasn’t as soft and moist as it seemed to be with the mint version that I reviewed here. The firmness didn’t bother me, it was just a tiny bit more chewy. In the end, I felt it was too damn sweet and the sweetness overpowered the actual flavors. The color of the marshmallow filling was the best part. 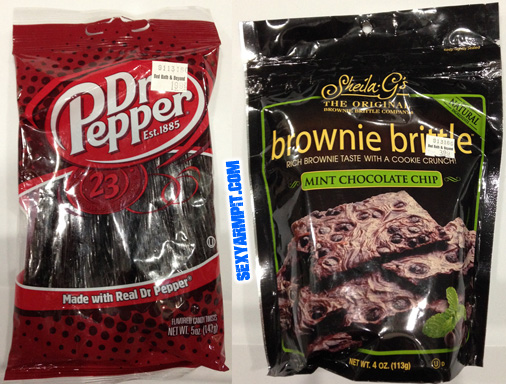 Dr. Pepper “Candy Twists” a.k.a what I like t o call Dr. Pepper flavored Twizzlers. Not made by Twizzlers, but that’s the most comparable candy. As I ripped the bag open I noticed they smelled just like Dr. Pepper, which was encouraging. After I devoured a few, I noticed that the flavor was ridiculously good and extremely accurate to the 23 flavors of Dr. Pepper, but holy shit they were chewy. It was like trying to chew up a delicious garden hose that was irrigating Willy Wonka’s soft drink cascade. They’re one level tougher to chew than your typical Twizzler, but that didn’t stop me from eating the entire bag though. Now I feel gross.

Sheila G’s Mint Chocolate Brownie Brittle – These “cookies” were excellent. Although I’m not a fan of really crunchy things for dessert, these didn’t break my teeth that much. Typically, if I were to have a cookie, I prefer a soft one, and if it’s not soft, I submerge it in milk forever until becomes a complete mess. Couldn’t do that with these though. Their crunch was at near-Biscotti levels. The mint chocolate chip flavor was superb. Be careful though – it’s very easy to eat the entire bag of these.