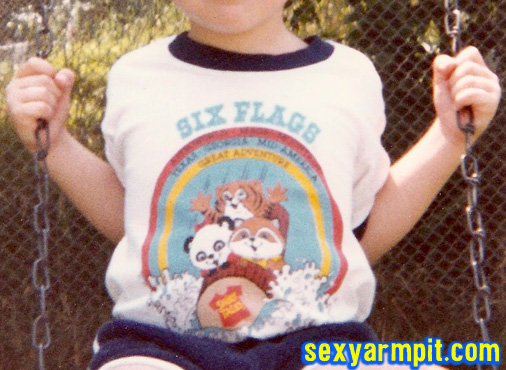 Pammy, Rick, and Tyg from The Shirt Tales riding the Log Flume on this Six Flags t-shirt
Remember The Shirt Tales? A lot of the ’70s and ’80s kids and nostalgia freaks out there definitely do. If you don’t remember them, they were a group of animals who were cute to an absurd degree and their thoughts would materialize in illuminated words right on their t-shirts. Although the Shirt Tales were only around for a couple of TV seasons (1982-1984), they had a slightly longer life on the front of Hallmark greeting cards and various other tie-ins, one of which we’ll look at in this post.

In their own Hanna-Barbera cartoon show, the gang fought crime and they even had their own little Batcave-type headquarters. I tried to jog my own memory by watching an episode on YouTube called The Big Foot Incident. Memories started rushing back, but I didn’t remember much about the cool set of villains who resembled bumbling versions of the Universal Monsters. The ring leader (Mesmo? Not very original) could’ve been a horror host and his lair was basically a haunted mansion that was constantly being showered with frequent lighting bolts (awesome). This all seemed very uncharacteristic for a bunch of furry and lovable little creatures who were created to sell Hallmark cards.

If you were to associate cartoon characters with Six Flags Great Adventure here in New Jersey, Looney Tunes would immediately come to mind, but there’s proof right here that there was a brief time when The Shirt Tales reigned at Six Flags! According to the Great Adventure History site, in 1984, the kiddie kingdom area was renamed Shirt Tales Land and the characters would come out and greet kids. This only last for one season until getting taken over by the Looney Tunes.

The above photo is from the exact period of time when the Shirt Tales were popular in the early ’80s. Back then, they incorporated all their locations onto one t-shirt so they didn’t have to print up separate shirts for each location, so that explains why Great Adventure is listed at the bottom. Fortunately though, it stands out the most since it’s highlighted in yellow.

This is ’80s nostalgia at its best. Why do I say that? Well, I actually scanned this photo in myself and it’s of my best friend who I’ve known since I was in pre-school. I had the photo because not too long ago, I made a slideshow for his birthday of old photos that his mom was nice enough to gather up for me. These included some real classics and I scanned them all in. I kept this one on the hard drive because I knew that somewhere down the line I would want to bring it up here at The Sexy Armpit. It was a double whammy!

In the past several years I felt that the characters that get licensed out for use in marketing and merch for Six Flags G.A should be capitalized on more. I hate seeing the DC Universe and the Looney Tunes not being exploited to their fullest, but it probably has a lot to do with the fact that the park is no longer owned and operated by Warner Brothers, which it was at one time.

I obviously have a huge affinity for Six Flags nostalgia, but it’s merely a coincidence that the last installment of T-Shirt Tuesday featured a Six Flags tee as well. Hell, I’m not opposed to doing more either, so if you know of any vintage Six Flags tees/or you have old photos of you wearing one, let me know about them!