For several years during my childhood, my mom would keep a medium sized artificial Christmas tree up year round. No, she didn’t leave the Christmas decorations on it the whole time, she would decorate it with whatever coincided with the season. Summertime usually had things like American flags and beach décor, and Halloween, of course, had pumpkins, ghosts, and witches, etc. As offbeat as this seemed to people who came over at the time, it was truly a conversation piece. Personally, I thought it was a lot of work because I would help her put the ornaments up. Although it didn’t last more than a few years, it was certainly a memorable way to celebrate holidays and the changing of seasons. Since we’re deep into the Halloween season, if you don’t really want an artificial Christmas tree taking up space in your living room just yet, you can create a Halloween Mood Table.

The pioneer of the Halloween Mood Table, Matt from Dinosaur Dracula, has been doing these for eons and so many of his readers follow suit each year to usher in their own personal Halloween celebrations (this year even Jorge Garcia, star of LOST, got in on the fun!) Surprisingly, up until now I only admired Matt’s Mood Table as well as photos of the tables that were sent in to him. I finally decided to get into the game with my own assemblage of spooky crap to create my own Halloween Mood Table!

There’s a few reasons why I never took part in the festivities.

Perhaps the most prominent reason why I never created a Halloween Mood table of my own was because I’ve always kept so much of my Halloween and Horror stuff displayed all year that I never had the motivation to dust it all off and relocate it to another spot. If you are drowning in knick-knacks like I am, you know what a pain this is! This year, it dawned on me that if all this stuff sits in the same spot all the time and collects dust, it’s making things stagnant! I figured, why not take a stab at finally making a Mood Table to infuse my surroundings with a shot of Halloween spirit?

First, my September and October months have always been packed with events and trips well before I ever had my first website, so this left little time and motivation to work on the mood table. Then when I started doing the Halloween Specials, that ate up much of my time in September and October as well. It dawned on me recently that if I have time to put up a Christmas tree, then why the hell can’t I make some time for a mood table? Since this year’s Halloween Special is now available for all to see, I finally had time to dedicate to making this monstrosity!

The minute I started conjuring up this mood table, I was immediately overcome by the exact feeling that Matt described that one should get after admiring what they designed. It’s true too, because the table wasn’t even complete and I felt a surge of Halloween spirit, instead of butterflies in my stomach, I’m pretty sure they were cheap rubber bats. The fact that I haven’t done this in the past is ludicrous.

Let’s take a closer look at what I slapped together fairly haphazardly.

The table itself is a black wrought iron accent table that has to date back to the late ’60s. It was a gift to my parents after they got married and it had plant on it. It’s simple, and I’ve always loved it. It was probably because it was always there in my house, whether it had a spider plant sitting on it or a few coffee mugs, an ash tray, and some random uncles bifocals. It’s heavy, black table and it’s pretty timeless. When we moved into a smaller place, I lobbied hard to keep the table, I even said I’d keep it in my small bedroom. So, with us it came. Then when I moved out into my own place, I brought it with me. There was no doubt that it was screaming to be the official Mood Table from now on. It was fate. It travelled all these years and through all the different homes and has finally found it’s place in this world holding random Halloween related junk. I hired a table whisperer and he said the table is so happy now, it may want to keep that crap on it all year long, but mostly because it knows I probably won’t move it off until late November.

I threw together a lot of stuff that I’ve procured recently myself or as gifts and have mentioned here on the blog along with some other items that I’ve had for a long time.

There’s an illuminated pumpkin, a few Reaction figures, the vampire Monster in My Pocket that I picked up at the Trenton Punk Rock Flea Market, Halloween edition Toxic Waste candy, Halloween 3 Glow art from Bob Burke, atrocious Halloween art that I made with @DinosaurDracula and @FreddyInSpace, a mummy pooper, the Librarian Ghost from Ghostbusters, the Krispy Kreme GhostBusters pail, a couple of styrofoam headstones, Halloween Gak (thanks to Ipoisonthenachos) Frankenstein LED color changing candle, Jason goblet, a packet of Ghoul Aid, a skull, pumpkin candle, a wind up zombie, a Rockin’ Solar Buddy, Blair Witch Sticks and Stones VHS tape, Clarence, Prime Evil who was my costume inspiration last year, the Dino Drac 2014 Halloween countdown print, a Miller Lite Scary Pumpkin Coaster, Ghosts of Central New Jersey book, and one of the horns used to make Mike’s Jersey Devil getup in this year’s Halloween Special. 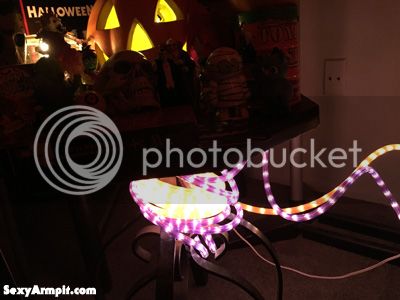 Wrapped up sloppily and helping to create the ambience underneath the table are orange and purple rope lights that I was about to take back because I didn’t think I needed them this season, but it dawned on me that this is the perfect way to put them to good use. After nearly impaling myself on their sharp plastic packaging, I wrapped them around the legs of the table and plugged them into a step-on light switch for easy access. Not sure if that’s the technical UL certified name for it, but step-on light switch works just fine for me.

To take this a step further, I wanted to connect my iPod speaker dock underneath the table as well, but there were no more outlets. It was best to avoid a Darren McGavin fuse moment in A Christmas Story. I’ll save that project for the weekend!