We got on the road ridiculously early to beat the holiday traffic. It may have been the quickest drive down to A.C ever. Here’s the kicker: duh Jay, most hotels don’t let you check into your room at 8:45 AM!

Once we arrived at Harrah’s we had some time to burn, so our trip kicked off with me waiting about an hour for a couple of schmucks to finish playing the new 1966 Batman TV Series slot machines so I can jump on. I swear they bet the minimum on each spin and they just…kept…winning. 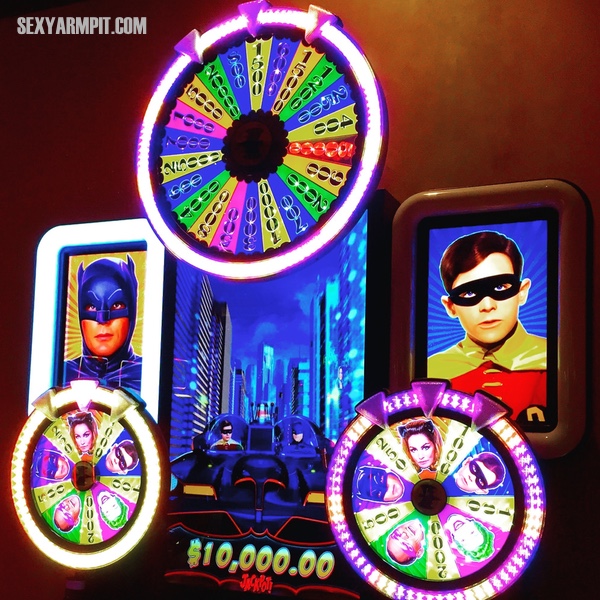 Nearly an hour later, one of them finally decided to cash out, so I sat down at the open seat instantaneously. Playing the game was pretty meaningless to me since I don’t get any thrill from gambling, I just wanted to be in the machine’s presence and see all the neat little bonus games that it offered. The middle video screen displayed the colorful animated style graphics of the opening intro of the show and occasionally showed the Batsignal followed by the Dynamic Duo racing to the scene in the Batmobile. The slot screens offered footage from the actual show when you hit a bonus. Each seat had a spinning wheel with the classic Batman rogues gallery too. The game is a lot of fun and feels like a big deal, especially for hardcore fans of the 1966 Batman TV Series, like me.

After battling some traffic, Matt from Dinosaur Dracula and Miss X joined us a little later and the first order of business was to make this trip feel like a traditional Jersey Shore summer getaway. We headed over to the Steel Pier on the boardwalk. Once known for their diving horses, now they just fling screaming teenagers around in slingshot rides and blast generic cover versions of ’80s hair metal tunes. Can’t blame them for not wanting to be liable for paying royalties to the Crue. 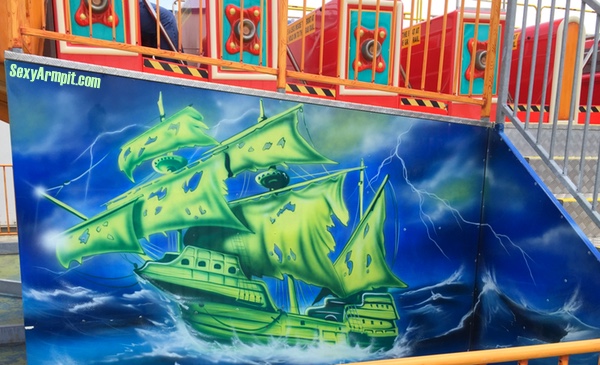 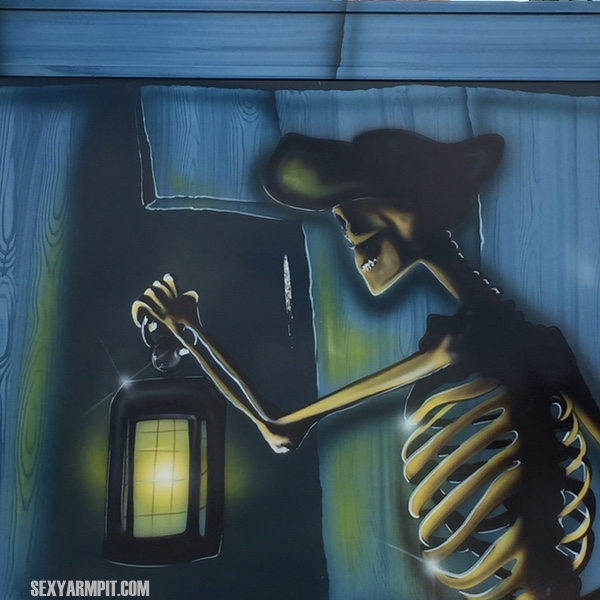 Although it only takes up a small pier of the AC Boardwalk, the Steel Pier still has some cool stuff to look at. First, I was mesmerized by the artwork on the Flying Dutchman, a swinging pirate ship ride. Carnival and amusement park rides usually have a very unique flavor of art on them that I can admire forever. I found the art on this ride to be awesome looking, so I drooled for a little while until I stumbled onto something even more tremendous.

As Matt mentions in his recap, I was astounded to see the Dinosaur Beach signage hidden behind a bench. I pulled him over to check it out because he brings up Dino Beach in conversation probably once a week. You know how some people left their heart in San Francisco? Matt left his heart at Dinosaur Beach in Wildwood, NJ. Collectively, we must’ve snapped about 36,459 photos of nearly 20 year old signage with a Denver looking Dinosaur mascot painted on them. Annie Liebovitz makes the big bucks as a photographer, but after all those photos we took, money can’t buy that feeling of going home knowing our lives are complete thanks to the opportunity to memorialize remnants of the ’90s mecca, Dinosaur Beach.

So, who’s down for some drinks and some chips, salsa, and queso dip at the Landshark Bar & Grill? ME. As a kid it was Fla-Vor-Ice and WWE Ice Cream bars, now it’s Tequila and Mexican food- what a transition! I wasn’t even drunk at that point and I can say that they have some of the best salsa and queso dip I’ve ever had. The salsa especially tasted so fresh and flavorful. I’m not saying to go out of your way to get there, more just like GO THERE NOW. They also have some crazy concoctions to imbibe. Miss Sexy Armpit went with “Tranquil Waters” which was Cruzan Mango Rum and Blue Curacao mixed with pineapple juice and mango. Good, but too sweet for me. 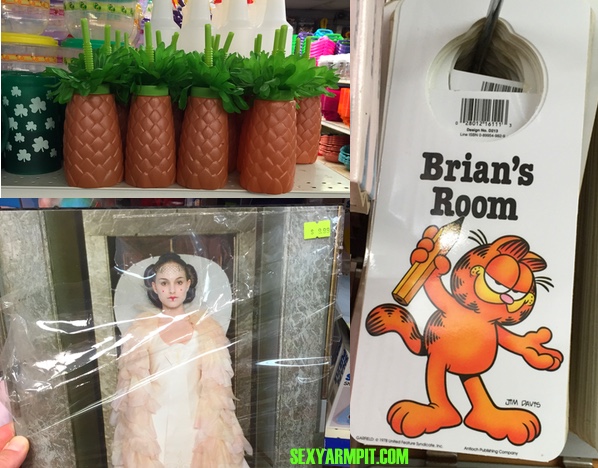 It was about that time to see what treasures awaited us in the shitty stores up and down the boardwalk. This was a special occasion that took us away from the usual flea market trip so we made due with the schlockfest of stores that pop up literally every 2 feet on the boardwalk. Most of these stores sell the same junk, but once in a blue moon you’ll get lucky and find an assload of vintage toys, air fresheners, and night lights like we did when we struck gold on our New Year’s Day 2014 99 cent store invasion.

The junk wasn’t quite as bountiful as that time, but I still have a lot to show you. Just to give you an idea of the type of stuff we ran into, take a look at these pineapple water bottles and Garfield doorknob hangers. Plus, there’s no better time than now to stock up on large Star Wars Episode I prints just in time for Force Awakens, 16 years later! I spotted these pictures still in their original (torn up) cellophane sheets laying at the bottom of a shelf that was in total disarray. Selling at their original price of $10 bucks, passing on the them wasn’t difficult. I still love you Natalie Portman, just not enough to drop a Hamilton on your old cardboard picture. 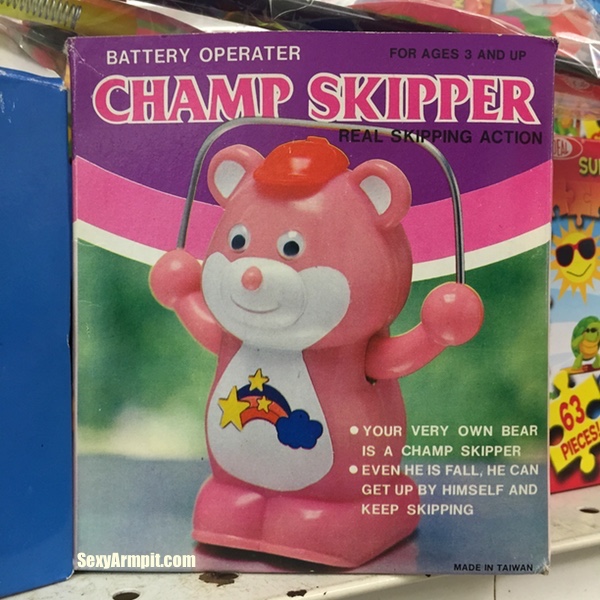 Perhaps there’s nothing more amusing than this bootleg Care Bear a.k.a Champ Skipper. Keep in mind that EVEN HE IS FALL…the damn thing can get back up and start skipping again, yes I realize that doesn’t make sense, but the manufacturers didn’t seem to care either. It’s “battery operator” too. There’s no way that Google translate existed in the early ’80s, right? Just making sure. 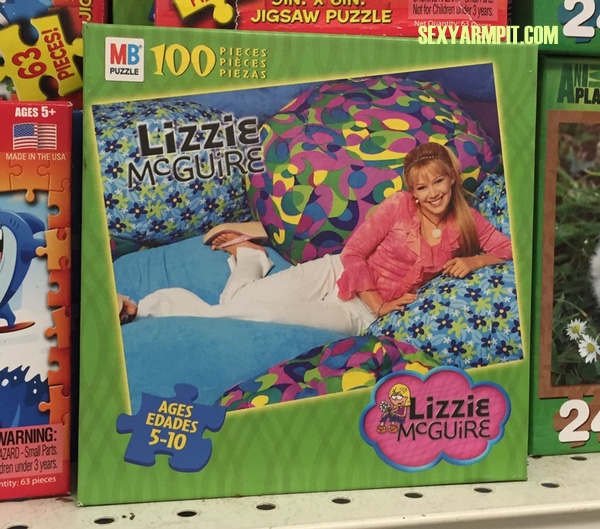 This Lizzie McGuire jigsaw puzzle impacted me much more than it would’ve any other normal human being. I’ve never had any qualms about admitting that I was obsessed with this show when it first came on and ever since then I watched so many silly shows on Disney Channel. This one in particular started that trend for me. One of the main reasons for it’s appeal was the fact that it had the flavor of a few shows and movies I loved as a kid. Savage Steve Holland also directed 9 episodes and Lewis Skolnick plays Lizzie’s dad! Anyway, since I’m living somewhere in the past, it should’ve shocked me more to see this puzzle because this was originally on sale approximately 13 years ago. 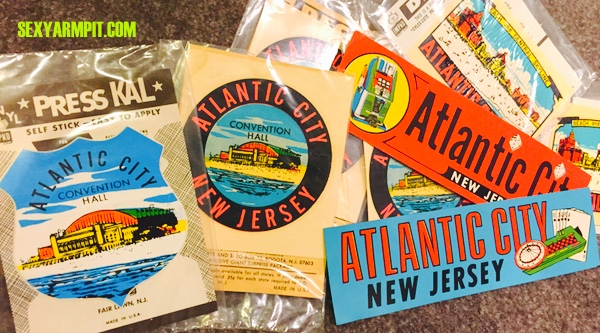 The sights were amusing, but nothing was screaming BUY ME until I heard Matt yell over to me from the back of store. “You’ve got to see these old AC stickers.” I jolted over to check out his discovery. Sure enough, there was a basket of old Atlantic City touristy stickers, and I mean really old. These bad boys were two for a dollar. I also picked up the larger ones show in the photo. Thanks to Matt for finding me stickers of my favorite venue ever and adding to my collection of Jersey junk.

Electric sex may have gleamed in the window in A Christmas Story, but its surge blinds you once you walk into the back of all the dingy dollar stores on the Atlantic City boardwalk. 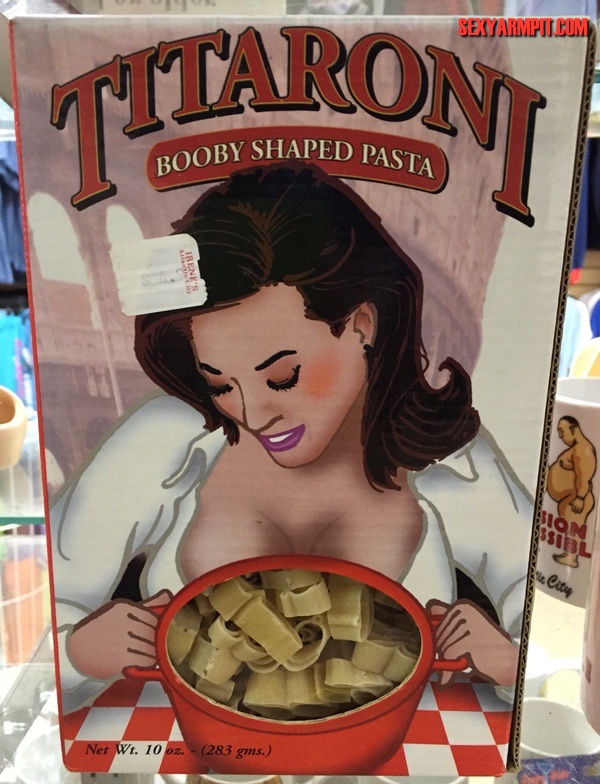 TITARONI. Who doesn’t love ronis and tits? Of course I’d find these in New Jersey, half of us are horny Italians. How come there’s no informercial for these demonstrating how they get the tits in the ronis? And no one in the world can dispute me in saying that this is clearly a bootleg illustration of Gloria Trillo on the box. BOOM. All I know is that this pasta needs to be made with some tender love and care. Chef Boyardee needs to buy the rights to Titaroni and market them to kids like Robin Arryn on Game of Thrones who are still breastfeeding well into their tweens. Come to think of it, maybe Robin Arryn needs The BIG Sipper? Perfect way for Lysa to wean him off the teat! 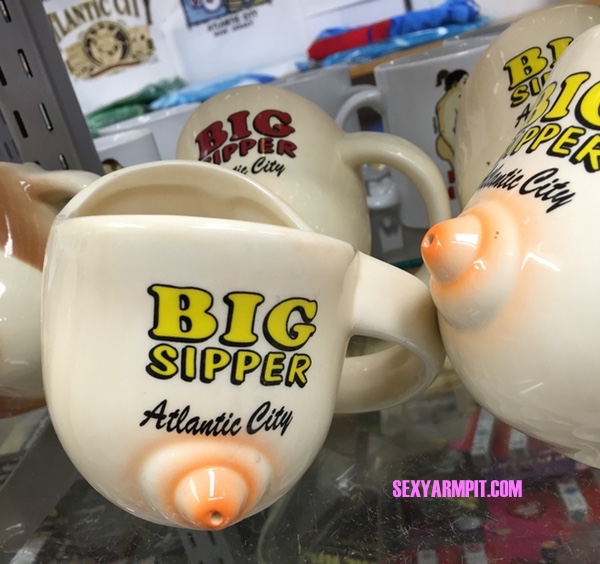 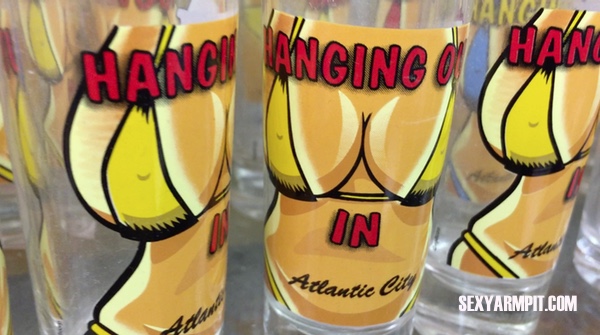 Not buying the “Hanging out in Atlantic City” glass may be my biggest regret of the trip. I’m sure I’ll be back in A.C soon enough, so I’ll remember to pick one up.

Would someone just please go and buy up all this shit finally and put it out of its misery? Thanks for reading and come back soon for Part 2 to read about the rest of our star spangled getaway to Atlantic City!