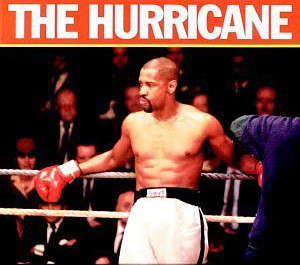 As I sit at my computer I can barely concentrate due to the violent winds firing a barrage of liquid bullets at my windows. Weather reports have supposedly downgraded the storm but it seems like we are experiencing a full fledged hurricane. The President and Governor have declared a state of emergency in New Jersey and the surrounding areas. About a million people have evacuated our shore towns. Casinos have been shut down for only the 3rd time in over 30 years. So, while I still have power and Internet service, I’d like to recommend some appropriate viewing in case you are looking for something to watch since you’re probably stuck indoors for the next day or so.

Despite accusations of it not being absolutely historically accurate, I still recommend you check out 1999’s “The Hurricane,” which features another first rate performance by Denzel Washington. Washington was nominated for an Academy Award for Best Actor and also took home a Golden Globe award for his work in the film and his turn was also lauded by Roger Ebert as being “on a par with his work in Malcom X.”

The biographical film of middleweight boxer Rubin “Hurricane” Carter’s life works best if you aren’t too familiar with his unfortunate story. Carter was wrongly convicted for a murder in Paterson, New Jersey in 1966 and spent 20 years in prison for it. It’s a compelling and tense drama filled with emotional performances and engrossing boxing sequences. The film also stars Deborah Unger, Liev Schreiber, Rod Steiger, Dan Hedaya, David Paymer, Debbi Morgan, and Vincent Pastore. 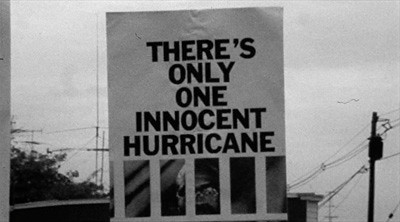 A few interesting facts about the film:

– Bob Dylan’s 1975 protest song “Hurricane” is featured on the soundtrack and according to Wikipedia, Dylan visited Carter in prison and later wrote the song.

– The picture of Malcolm X used in the film is actually a picture of Denzel Washington from the film Malcolm X.

NJ’s very own Arkham Asylum, East Jersey State Prison,
or as it was referred to for the majority of my life: Rahway Prison
With so many great films, TV shows, and mentions in popular culture, it’s easy to forget that the place pictured above actually houses criminals and not actors, cameras, and boom mics. Even if you aren’t from Jersey, chances are, you’ve seen or heard of Rahway Prison before. Maybe you knew it back when it was actually called Rahway Prison, before the people of Rahway, NJ disowned it and declared that it was technically in the neighboring town of Avenel, NJ, despite it’s mailing address. Finally, as they did with Newark Airport (now the fancy Liberty International), New Jersey’s balls dropped off and renamed the building East Jersey State Prison. And in yet another silly name change it became North Jersey State Prison for possibly it’s most high profile and memorable appearance thus far – the beginning of 2001’s Oceans 11.

If ever there was a film that did not need a sequel, it was Steven Soderbegh’s Oceans 11. If you’ve seen a Vegas heist film, you’ve pretty much seen them all, but I wouldn’t switch the channel if this was on cable. While nobody can come close to the Rat Pack, Clooney and Pitt’s fantastic chemistry makes the entire series worthwhile. Bare in mind that we wouldn’t have been able to enjoy the duo’s quirky partnership if Danny Ocean had not been granted his release from East Jersey State Prison. Something about this building is incredibly ominous. Even though I pass the prison frequently, on film it looks even more intimidating.

A scruffy, overdressed, fresh out of jail Danny Ocean

Rusty, who is perpetually devouring food, will most likely hit up a local establishment
for a pork roll, egg, and cheese sandwich, then head into traffic and catch some good ol’ fashioned Jersey road rage!
www.SexyArmpit.com