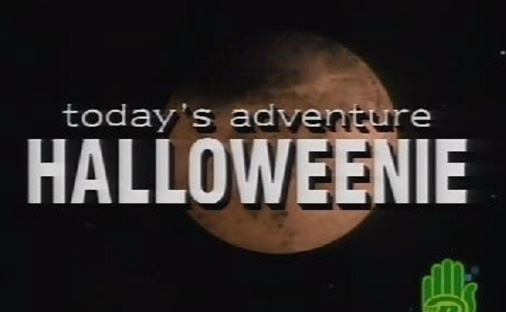 Captures from the The Adventures of Pete and Pete Season 2 episode “Halloweenie”
A good way to measure how much older you are than someone you meet is to calculate how many years ago the debut of Nickelodeon is from the year they were born. I grew up with the golden age of Nick and so many of my younger friends have a difficult time relating to that era because they weren’t born until later. They started watching Nick in the mid to late ’90s. Nowadays you can just dial up any show old or new on the Internet, but looking back at some ancient Pinwheel episode doesn’t do it justice. Comparing it to shows today is unfair. I’m not exaggerating when I say this, but when shows like Pinwheel and You Can’t Do That On Television were popular they were mind blowing to kids, and especially to stoned adults. I would never say Nick’s lineup throughout the ’90s was any less great, but it’s in a different way because times were a-changin’. 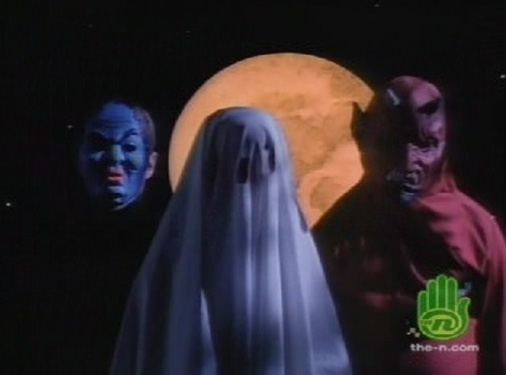 One of the many beloved shows that aired on Nick in the ’90s was The Adventures of Pete and Pete which premiered on Nick in November of 1993. I’d say by 1992 I was pretty much phased out of Nickelodeon for the sole reason that I stopped watching TV so often and getting more into activities that required actual movement rather than vegetating on the couch. Although the ’90s were definitely not my Nick time, I really wish I hadn’t missed out on The Adventures of Pete and Pete, a show that was set in Wellsville, NY, but predominantly filmed in New Jersey. 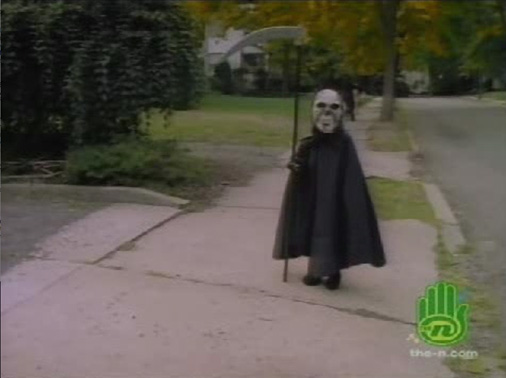 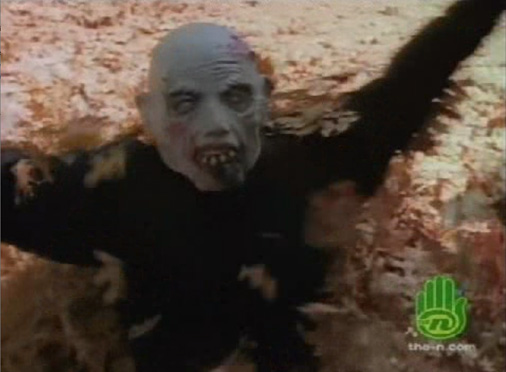 Recently I asked my friend Steve, resident Pete and Pete expert, if there was ever a Pete and Pete Halloween episode, and he rapidly replied “YES.” I was pretty excited to hear this because I was looking forward to checking out the old Nick show that I never got a chance to watch when I was younger. I recently got a hold of it and my first reaction to the episode “Halloweenie,” which aired in October 1994, was jackpot. Here’s the synopsis taken from Nickipedia:

“Younger Pete decides to enter the annals of history by breaking the record for most houses visited on Halloween and tries to enlist the help of Older Pete. Older Pete is torn between his loyalty to his brother and the coming of age and abandonment of the childhood ritual of Trick-Or-Treating. He must decide whether to face the ridicule of his peers and go Trick-Or-Treating or to join the notorious “Pumpkin Eaters”, a group of vandals who terrorize neighborhood “Halloweenies.” 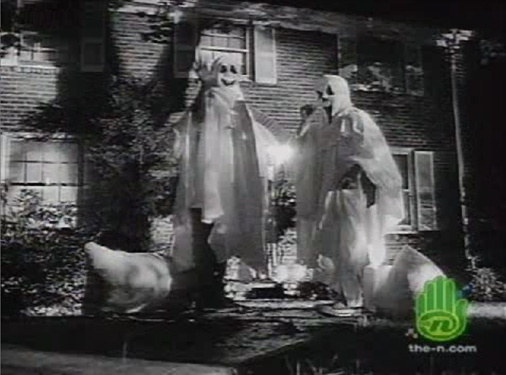 I’m a kid at heart so little Pete’s love for Halloween and desire to break the trick or treating record appeals to me, but I can totally relate to big Pete’s fear of becoming a Halloweenie. As a fellow suburban kid, there was a definitive point where I stopped trick or treating because I felt that the ritual needed to be reserved exclusively for the kids and I never went back, but I remain a mega-fan of Halloween.

The amount of nostalgic Halloween images contained in this episode was an unexpected surprise. The story was fun, albeit not as horrific as I was hoping for, but it was on Nickelodeon after all. The Pumpkin Eaters looked cool, but they weren’t very formidable, they just made a mess of everything. The episode evokes an awesome Halloween vibe and as the credits rolled I sat wishing it lasted another half hour.

*Production of the show was moved to Cranford after the show made such a mess of the town during the filming of “Halloweenie.” They did make quite a mess. There’s hundreds of smashed pumpkins and streamers, etc. It looked like a thousand kids who mainlined Ghoul-Aid were let loose on mischief night.

www.SexyArmpit.com
While your Friday the 13th celebration might be winding down, mine is just beginning. Tonight at 8pm, the original Friday the 13th is playing in Blairstown, where part of the movie was originally filmed. Before heading to the theater, let me bring you back in time for a minute.

The best memories of my youth don’t include football games with kids in the neighborhood, hanging out with friends trying to get girls phone numbers at the mall, or rattling off sports statistics in a heated debate on fantasy football. My youth consisted of horror movies, comic books, and cartoons.

I don’t care if it makes me sound like a couch potato, but I grew up basically studying movies and TV shows. Heck, I still remember the dialogue to half the commercials that played on WPIX from 1985 through 1993. The moments that stick in my head the most are from WPIX’s Shocktober. When that Halloween tradition rolled around I couldn’t wait to watch whichever Friday the 13th films that were scheduled to air.

Since Jason and his legend took up such a major part of my imagination as a kid, it’s no wonder why I’m still obsessed with the franchise today. Since the real Camp Blood is in Northern New Jersey, the story of Friday the 13th always held a prominent place with kids at school. Every kid seemed to have their Jason stories. Personally, I never made up an anecdote of a run-in I had with him in the woods, but most of my friends considered me the go-to Jason Voorhees nut. On Halloween and otherwise, I used to dress up as the man behind the mask, sometimes just to scare people. Being that my name is Jay, it enhanced the gimmick a bit, since a ton of people have always taken the liberty of calling me Jason, even though that’s not my actual name.

Jeez, I almost forgot, there was a point to this post! On our recent trip to the Halloween Mart in Las Vegas, I picked up the Jason Voorhees “light up” poster by WOWindow. It’s a poster that hangs in the window giving the impression to people who drive by that Jason Voorhees is staring at them from my living room. They actually come in a ton of different options such as Freddy Krueger, Frankenstein’s Monster, the Wicked Witch of the West, Casper the Friendly Ghost, skulls, zombies, a mummy, and a badass looking vampire, but I opted for my pal J.V. WOWindows makes these posters for other holidays such as Christmas and Hanukkah as well. Check out their site to see their entire selection. The WOWindow company is based out of Cranford, New Jersey and depending on your age, you may know this town as one of the filming locations from Nickelodeon’s The Adventures of Pete & Pete.

“Come up to the lab and see what’s on the slab!” Yes, Frank N. Furter will be making a man in New Jersey starting this weekend. Cranford, NJ’s non-profit dramatic club has been entertaining audiences for 94 years, making it the longest continuously producing community theater in the state of New Jersey. The theater has a rich history and I’m eager to see their upcoming stage production of one of my favorite Halloween time traditions, Richard O’Brien’s Rocky Horror Show which premieres this Friday night!

CDC will also feature a special midnight performance of The Rocky Horror Show on 10/27. For more about show times, tickets, and directions to the theater visit www.cdctheatre.org and support local theater!!