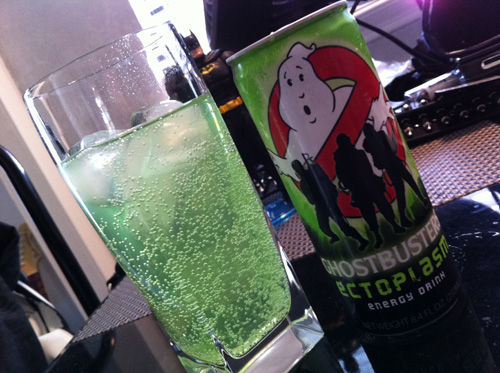 This Ghostbusters Ectoplasm energy drink jumped out at me from a small refrigerator in Spencer’s in the mall, very much like the terror dog did to Dana Barrett in the movie Ghostbusters. When I got home, I only took a couple of sips of the Ectoplasm and was not really impressed by it’s taste. The green color wasn’t as neon as a I thought it would be, and it didn’t glow in the dark, which was sort of a let down, but probably better for my insides. No ghosts flew out of the can after I cracked it open either. That’s probably a good thing also because I sold my Kenner proton pack and trap a long time ago. I couldn’t pinpoint the smell of the drink, but it was basically a Monster/Red Bull hybrid. It had a sour citrus/melon flavor and left a very syrupy texture in my mouth. The drink was filled with sodium, sugar, and of course, caffeine. Let’s face it, this drink has nothing on Hi-C Ecto-Cooler!

The reason why I mentioned that I only took a couple of sips of it is because I’ve recently kicked my caffeine addiction. Not sure if it was an actual addiction or if I am just being melodramatic, but regardless, I think it was a good move. I was constantly relying on energy drinks like Monster and Red Bull because I constantly felt tired. It made me start thinking that they were actually the reason why I was always tired. WRONG!!! The reason I’m always tired is because of this here blog. I stay up way too late working on posts. editing videos, and cropping pictures when I really should be sleeping. Here’s the indication that you’re staying up too late: You’re sitting at your computer desk but your eyes are shut and you’re completely incapacitated, only to wake up and realize you’re taking screen caps of some stupid movie that mentions New Jersey once. So I not only lack sleep, but a life as well.

Pounding these caffeinated concoctions sure made me alert and amped up, but not without side effects. My heart rate began to skyrocket in simple situations like walking up stairs. I also felt crappy and lethargic constantly. I knew this was from the energy drinks because I run all the time and go to the gym often and consider myself to be in good shape. Within the last month or so I curbed my caffeine intake altogether just to see if the enticing cans were the culprit. Sure enough my heart rate does not surge when I go up stairs and I don’t feel as jittery as I did when I was relying on these beverages. I still feel just as tired though, and every time I go to grab something with caffeine I get decaf because it’s obvious that I don’t need it and that the real problem is my lack of sleep. I tend to get an average of 5 or 6 hours of sleep per night which is not enough for me. I need more like 7 or 8 and I’ll probably still be tired! Have you tried this Ectoplasm yet? Do you think you’re addicted to caffeine too? Let me know, Love, The Sleepy Armpit.