For a fairly accurate indication of my knowledge of sports, you can just watch The Lonely Island’s “We Like Sportz.”

Upon this admission, it wouldn’t be fair to categorize today’s NJ T-Shirt Tuesday as a sports post. And don’t start fuming if you hate the Devils, this is a New Jersey blog after all, so don’t hold it against me! I don’t even know enough about the NHL landscape this season to offer much in the way of Hockey commentary, besides, you can go to sports blog for that. I will say that I know that the Devils haven’t had the best season, but this t-shirt will make you quickly forget that.

Inclusion of this tee here at The Sexy Armpit was such a no-brainer that it was like scoring an empty net goal. See, I know a little. What I dug about the New Jersey Devils officially licensed “Masked Intentions” t-shirt is that it’s an imposing combo of various things.

First, the mostly white graphic on the plain black tee calls to mind Sons of Anarchy. The overall design of the shirt is reminiscent of the famous Sons logo that has been copied so many times, especially on t-shirts and hoodies up and down the various boardwalks down the shore. The red outline provides the final touch in capturing the Devil’s color scheme while simultaneously adding a demonic quality. Hence, those red eyeballs peering out from the creepy goalie mask could mean that it’s the actual Jersey Devil heading out on the ice, or a goaltending T-800.

At the bottom, one word brings it all together like that damn rug in The Big Lebowski. HALLOWEEN…of course! This must have been a special Halloween edition t-shirt. I’m several months late on this, but sometimes I prefer it that way. It’s like finding buried treasure. Now what do you say we go slap some pucks or something?

As we say goodbye to our NBA franchise here in New Jersey, we can be thankful that we still have the New Jersey Devils in the NHL. They are presently the ONLY professional sports franchise with balls (or pucks) big enough to tout their Jersey affiliation.

The Devils home ice is at the Prudential Center in Newark, NJ. “The Rock” as it’s known is one of the coolest venues for sports and concerts in New Jersey. It’s accessibility from anywhere you are in the area is unmatched and the restaurants and bars all have awesome views of the arena action. You’ll see lots of Devils memorabilia and signage around the grand concourse level including the above pictured map of New Jersey that I snapped a picture of the last time I was there.

Presently, the New Jersey Devils are 0-1 in the conference semi-finals against the Philadelphia Flyers. 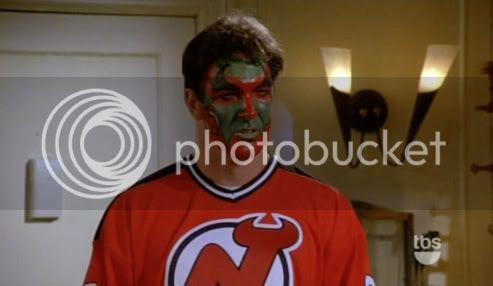 Earlier tonight in preseason NHL action, the New Jersey Devils beat the New York Rangers. But, as you know, this isn’t a sports blog. Although, there aren’t many things that get people as passionate as they do for sports, except maybe The Simpsons, and Seinfeld.

Seinfeld freaks know every episode, so this one is for you! In the 6th season (1995), Elaine went on a date with hardcore New Jersey Devils fan David Puddy played by Patrick Warburton. Just before they leave to go see the Devils/Rangers game at the Garden, much to Elaine’s shock and dismay, he reveals himself to be a face painter. Puddy was just one of those crazy fans who the camera pans over to after a huge play or when the home team is trying to get a rally going. Elaine will have none of it because she thinks “it’s insane.”

With his diabolical looking face paint on, Dave even scared the crap out of Kramer at first! With a Brodeur jersey on and his face full of grease paint, Puddy screamed at the top of his lungs during the game. The Devils wound up winning and Puddy rubbed it in everyone’s face, including a priest’s! The priest thought he was the actual Devil! Sports fans out there know the kind of intense fan Puddy is. I’m a fan of Patrick Warburton and he was the perfect casting choice to pull off this character. I think he’s a funny dude and if you aren’t familiar with him, you’ve probably heard his distinctive voice overs everywhere.

At the end of the episode Elaine tries to break it off with Puddy because of how much the face painting is weirding her out. He tells her he’s going to stop for her and all seems fine after that. Later, they are messing around on the couch and Elaine opens Puddy’s shirt to discover a big red “D” painted on his chest so he can spell out Devils with other guys in the crowd at the game.