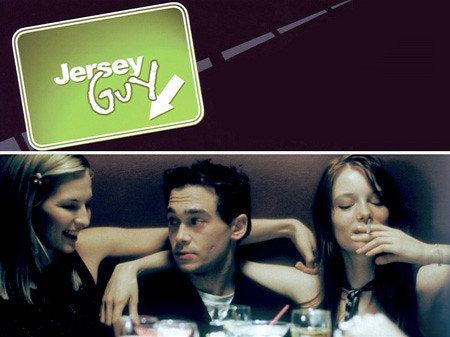 Who the hell wants to watch a movie about a Jersey GUY anyway? I guess guidettes would, but only if it stars big sweaty fist pumping gorillas. It’s safe to say that more people are interested in Jersey GIRLS. We know for sure that Tom Waits, Bruce Springsteen, and shit, even Antonella Barba definitely are. The curious thing about the 2003 film Jersey Guy is that it disregards the typical Jersey stereotypes. It’s probably because Jersey Guy was made years before MTV’s Jersey Shore brainwashed the world into thinking everyone in Jersey is a guido. DJ Pauly D was probably on the ones and twos on his Fisher Price record player when this movie came out. So if it’s tanned, ‘roided, guidos you are looking for, pass this one up.
Jersey Guy is about Jack, a 25 year old who still lives at home…in Jersey (duh!). That’s not really out of the ordinary because, shit, I’d still be living at home if I didn’t have so many comics, toys, and other crap. Jack’s dilemma is that he fears marrying “the girl next door and living his parents life.” He works at a nursing home and not only does he worry about the elderly people living there, but also about his parents. His father, who mentioned several times that he grew up in the north ward of Newark, is played by Arthur J. Nascarella, a pretty decent substitute for James Caan. 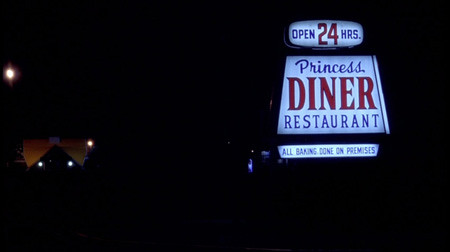 Jack has an affinity for the old school. He drives a classic Mustang, and he hangs out with old people. For this to be a more enjoyable film that sentence would’ve ended with: “…and falls for Betty White in this all out comedy about whacked out senior citizens.” Jack grows bored and he’s seeking some sort of thrill in his life that’s more exciting than his job and stagnant relationship. Most of his time is spent keeping tabs on the kooky old folks in the nursing home, so one night he goes out to NYC with a co-worker, Merle, and miraculously starts talking to a hot model. There’s no way that would happen considering he was dressed like a total dork and hanging out with a guy that looked like he could be his grandfather. The movie is chock full of neverending montages including the one that establishes the already established fact that Jack is interested in this hot model. She’s shakes her hair back and forth and shoots seductive looks. I’m getting sleepy.
Even though the film was released in 2003, it was made pre-9/11. The movie seemed even more dated when we meet Jack’s younger teenage brother who has a thing for fashion model Claudia Shiffer, who peaked in popularity back in the ’90s. When Jack’s brother asks him what he’s going to do about this new girl he met, Jack says “what any self respecting guy from Jersey would do, I’m gonna call her.” Referencing the state is completey unnecessary, why does Jersey even play into his reply? That’s a totally unrealistic piece of dialouge. Nobody from Arkansas would say “What any self respecting guy from Arkansas would do.”
The blatant references to N.J were welcome, but the outdated and lame quips were not. The dialouge sounded like a high school kids conversation in the late ’90s with such corny lines as “do the nasty,” and “I just ate, no pun intended.” I’m no stranger to explicit jokes, but Jack goes into a ridiculously disgusting “what if” scenario that has his mother in law drinking his seminal fluids out of a used condom she discovered that he and his girlfriend Susan left in bed. This came early on in the film and the tone hasn’t been defined at that point so hearing a joke like that was abrupt and disturbing. 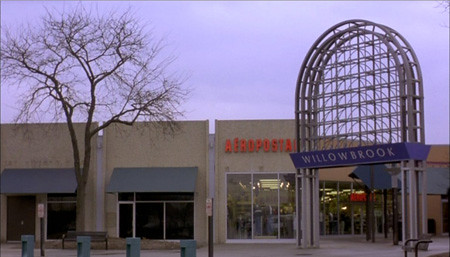 After an excruciatingly long sequence showing Jack unsuccessfully searching his closet for an outfit that isn’t a reject from the wardrobe department on the set of Leave it to Beaver, he hits up Willowbrook Mall to pick up some new clothes. Jack then realizes how rich and pretentious the model’s friends are. After hanging with her hipster pals and then heading out to the Hamptons with her, it’s obvious he doesn’t fit in with them. In part of his life he’s living it up and sleeping with a sexy model, yet he misses his hometown girl Susan, who he’s cheating on, but ultimately realizes she’s more important to him.
What makes Jersey Guy craptacular is the fact that Jack is a pathetic main character. Jack is unlike any Jersey Guy I’ve ever known. Making a trip to New York was a huge deal for him and it’s only a few miles away. It’s possible that the writers of the film attempted to draw parallels between Jack and the homebound seniors roaming around the nursing home, but it did not translate well at all.
Jersey Guy is a limp movie. The reality girl vs. fantasy girl theme has been done a thousand times, but I wasn’t attached to either of the girls. The only salvageable aspect of Jersey Guy was it’s nods to Jersey. Mentioned in the film are Route 23, the Seaside Boardwalk, Branchbrook park, and Central Avenue in Newark. Filming took place in Edgewater, Totowa, Bloomfield, and Wayne. Listen for shout outs to local newspapers The Star Ledger and The Bergen Record.
www.SexyArmpit.com