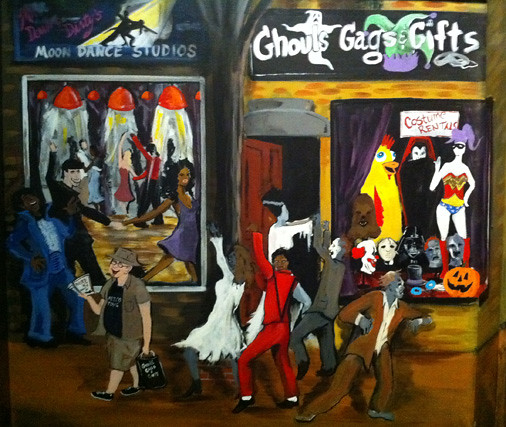 The store window of Ghouls Gags & Gifts, a Halloween costume shop, features masks of Jason, Vader, and Chewbacca in the window along with rental costumes of Dracula and Wonder Woman. A Thriller zombie dance is happening in the street while the Bride of Frankenstein looks like she’s heading into the store do some damage on her credit card. 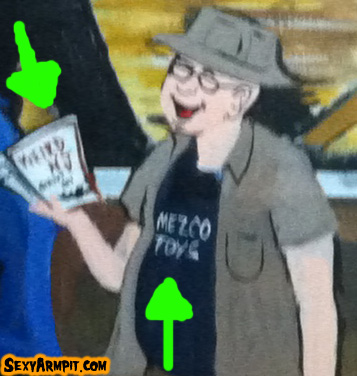 The artist drew a happy fanboy from NJ reading Weird NJ and wore a Mezco Toys t-shirt
I’ve always been a big fan of hand painted wall murals. My Aunt and Uncle had several done in their house before I was born and they are still there ’til this day. I admire the shit out of them every time I visit. There’s something about artists applying their work directly to a wall of a place you live in everyday that evokes such a one of kind feeling in me. To a lesser degree it’s like a tattoo. This all depends on how good the artist is of course. My sister drew on her walls when she was a kid, and that’s certainly not the type of wall artwork that I had in mind. Her sloppy scrawling of “I love Jordan Knight” although memorable, is nothing compared to the interior wall art we’ll look at in this post. I appreciate wall murals most when the subject matter reflects the inhabitants’ vibe and personalities, such as at Ferraro’s Pizzeria and Pub in Middlesex, NJ. 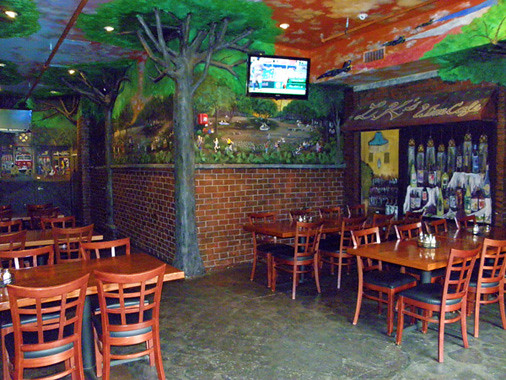 Depending on the nature of the mural I tend to appreciate the kitsch factor. When there’s a lot of details to investigate I’ll wind up mesmerized. As I mentioned, the murals my Aunt and Uncle have in their place include a ’50s diner scene as well as a scene of the New York City skyline viewed from within Central Park. I have vivid memories of studying these as a kid. They seemed so grand and enormous in scale to me when I was young. In comparison to having Samantha Fox and LJN WWF action figure posters plastered all over my walls, a mural was serious business. A mural is actual art. It’s not a framed replica of art or a vintage movie poster. It’s much more permanent. If you get bored with a poster in a frame you can just remove it and slip another one in. This was the real deal – directly on the wall. 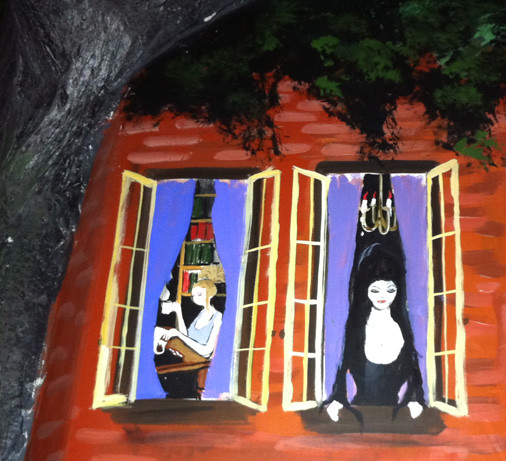 Elvira, Vampira, or non-descript Goth woman? Up to your imagination.

When I went with Miss Sexy Armpit to Ferraro’s for a birthday party for a dear friend a couple of years back, I wound up frozen in amazement once inside the party room. My eyes squinted while my head scanned the walls slowly back and forth to make sure I wasn’t seeing things. Sure enough, there were these cool murals all over the walls. It not only gave the space a cozy atmosphere, but it was also kitschy without being tacky if that makes any sense. If the walls were all just one bland color, such as beige, the atmosphere would’ve been excruciatingly dull. These murals made being in the space feel like it was another dimension set apart from the rest of the restaurant. It’s not often a restaurant has such a conversation piece like this that distinguishes it from other places in the local area. 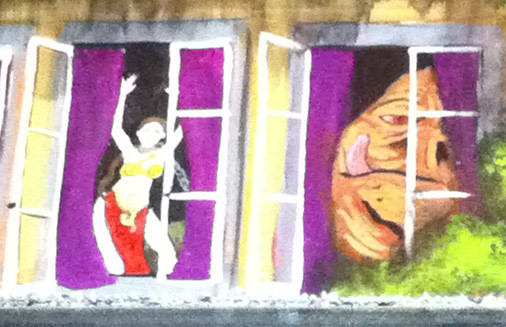 The element of surprise also played a factor in my admiration for these murals. I can’t say I expected to see any of “my friends” on the walls of what I thought was a run of the mill Italian place. By friends I mean Elvira and Slave Leia. The murals were like an explosion of pop culture characters along with an infusion of local flavor. The murals feel like they come alive in certain aspects. I’ve held onto the pictures I took that night and have been meaning to post them during the last two Halloween Countdowns, but I kept forgetting that I had them. I hope you enjoy perusing them as much as I did. Check out the place if you’re in the area. The food is really good and they have some excellent liquid concoctions at the bar. 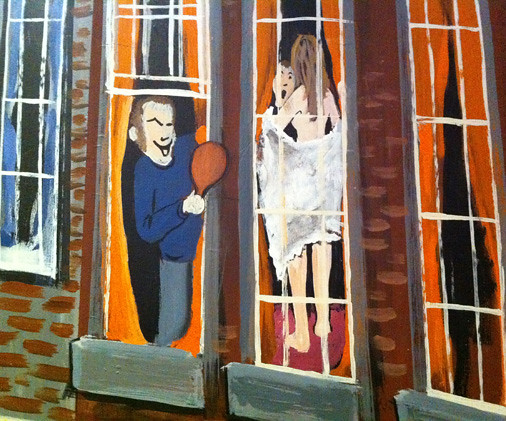 This isn’t so much scary as it is a bit perverse. You can’t see it, but the person opening the
towel is actually a dude. Just kidding. And the guy with the mirror/ping pong paddle has NO EYES! That part is true. That must have some deeper meaning.