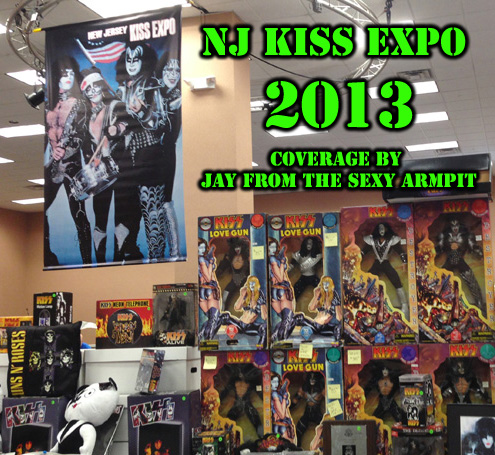 This weekend was packed with stuff that I want to tell you about. The first of these adventures was the New Jersey KISS Expo at the NJ Convention & Expo Center in Edison, NJ. 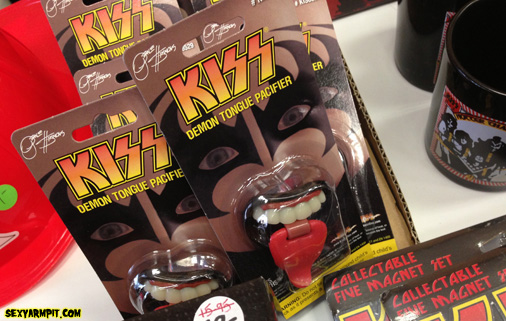 Oh, you know there’s an old adage that my great great great Aunt Florence used to say and that was “If you’ve been to one KISS convention, you’ve been to them all.” That might be true, but after going to a shit ton of them in my life, I can’t say there’s ever a moment when I’m at one that I’m ever NOT amused every second. Of course, if you’re not down with KISS, which many people aren’t, then you might not enjoy one of these, but there’s also a chance that if you aren’t a fan, you might be leaving as a newly inducted member of the KISS Army. That’s usually what happens.

KISS cons and expos have a way of seducing non-fans. An outsider might see the mystique and aura that surrounds the band, especially if they know nothing about them. That’s the best part of KISS. Walking around the expo center in Edison on Saturday, was no different than the other KISS expos I’ve been to, but it’s just a good time and a chance to not only buy KISS stuff, but also mingle with fellow KISS Army members. It was a total geek-out for us. 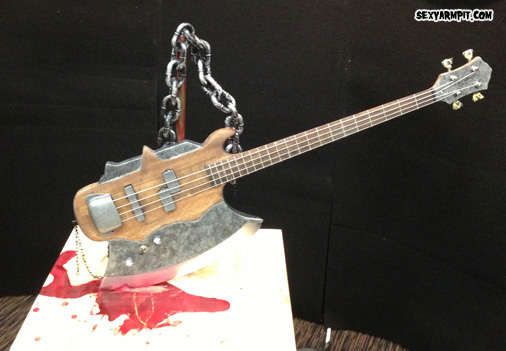 One time a friend once asked me, “What do you do at a KISS convention?” I always thought that was a silly question, but it really isn’t because not everyone knows what KISS is all about. For many fans, including myself, it’s about the music foremost, but there’s a large part of it that’s about collecting cool KISS crap. So yeah, buy some KISS stuff, look at some KISS stuff, listen to a KISS tribute band, can you see the underlying theme here?

Sometimes though, it’s almost like you MUST buy something just to justify why you go to KISS cons. My only minor complaint about the NJ KISS expo is that attendees pay anywhere from $10-$20 dollars admission, but the show is relatively small. There are 2 large dealer rooms and that’s about it. Unless you purchase a ticket to a V.I.P signing, such as Tommy Thayer (or last year was Peter Criss I believe) that’s the extent of the show. I was hoping this year would be bigger, but it was pretty much the same as previous years. Also featured was KISSNation, a KISS Tribute band, but next year they need to get the larger space in the building and make the event a bigger deal. They can open up their dealer rooms to not only KISS dealers, but also toy and pop culture dealers as well.

You want me to stop with all the jibber jabber and cut to the point where I tell you what I bought? Actually, I will do that because if I don’t, I’ll literally continue writing about KISS until 6 a.m tomorrow morning. Luckily, for brevity’s sake, I only picked up 2 things. Well, it was ALMOST four. 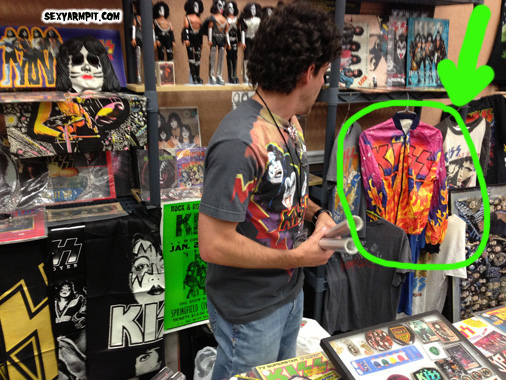 The only reason why I decided against the above pictured jacket was because it probably wouldn’t have fit me. Otherwise, why wouldn’t I want a ridiculously colorful KISS jacket that looked like it was made out of a kid’s plastic kite from Toys R Us in 1991? I still have my KISS rain slicker made out of a yellow Slip ‘n Slide material from ’86 that I never wear. In retrospect, cooler heads prevailed here, and by cooler I mean I wasn’t swayed by my emotions. A cooler head would obviously be wearing this insane KISS jacket while writing this. 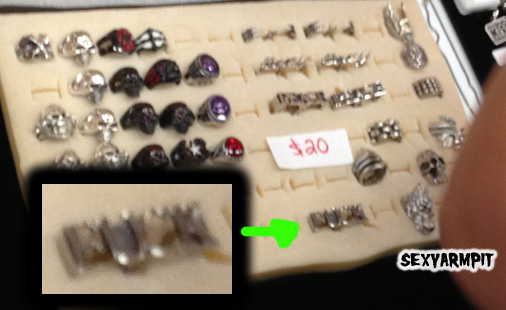 That jacket would really go well with a silver $20 dollar FUCK ring. Just to explain that one…it’s a Twent-ttty-doll-har ringgg that has the word F-U-C-K on it. Who would ever need a wedding band or an engagement ring when you can have a FUCK ring? 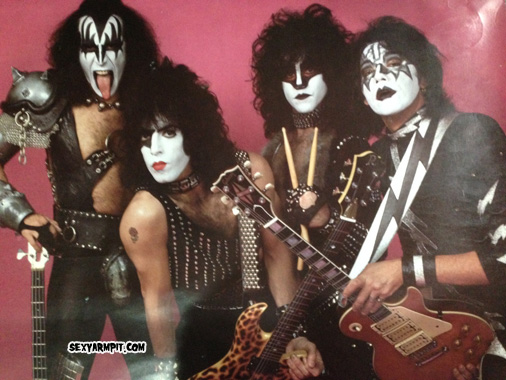 For realz though, my first real acquisition was a KISS poster. the poster was affectionately labeled “Pink Creatures Poster.” I would’ve bought it on best name principle alone. KISS fans know what this means, even the casual ones. It’s a whimsical title, but it’s not a secret code, it’s just stating that the background is pink and the album it was made in promotion of was Creatures of the Night, and poster means it’s a big ass photograph printed on a quite large piece of paper. Keep in mind that this is a 30 year old poster, not one you could find all over Spencer’s in the mall in 1999. The poster features the late Eric Carr, my favorite drummer, and it caught my eye because its pink background stood out. I admit that was part of why I bought it. It’s always cool to see KISS in front of a background that’s not black or gray. KISS did pose for a lot pictures in front of brightly colored canvases in the late ’70s as well as through the ’80s, and this was one of the cooler ones.

Let me make it abundantly clear that I DO NOT need any more posters. I own so many damn posters that I could probably wallpaper the entire interior of the New Jersey Expo Center. At this point, I have two framed posters waiting patiently to be put up on my wall and this new one’s probably waited 30 some odd years to get put up and now it won’t see the light of day until, I don’t know, 2023? Sorry pink creatures poster 🙁 you’ll always be posted right here on my blog. 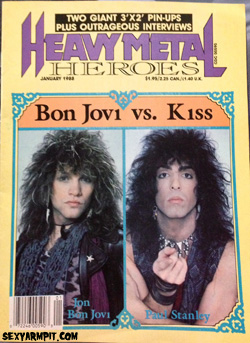 Next up was an old metal magazine. Typically I wouldn’t buy just a random old rock or metal magazine, but I found the cover to be pretty funny and appropriate. As if you hadn’t noticed, my favorite rock band of all time is KISS while Miss Sexy Armpit’s favorite “rock” band is Bon Jovi. I loved Bon Jovi in the ’80s and even in the ’90s, but basically all of their modern stuff has been totally weak. They lose even more points for alienating Richie Sambora and then firing him! If you know Richie, he’s a genuinely kickass guy and deserves much better treatment than that. So screw you Jon Bon Jovi!

KISS vs Bon Jovi? NO F*CKING CONTEST. Just blast a few of the hardest KISS tracks like “Parasite,” “Deuce,” “War Machine,” “I Stole Your Love,” and “Unholy” and you’ll know in a second who’s the better band. Even performing their weakest tracks in a concert 600 miles away from New Jersey, KISS would still blow Bon Jovi into the Atlantic Ocean. I’m pretty sure this was one of the easiest ways to sell a magazine in January of 1988. Motley Crue vs. Skid Row! ROUND 2 – FIGHT!