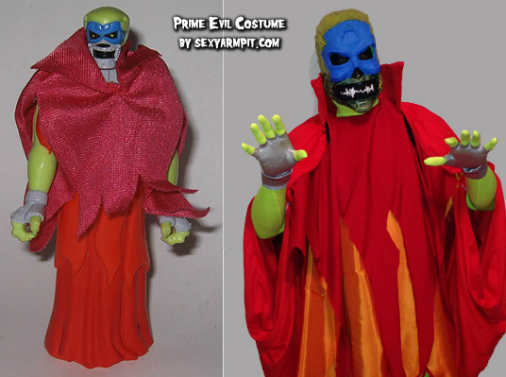 After a couple of Halloweens in Jersey full of shitty weather, including a hurricane, I set out to make this year’s Halloween more of a success. It doesn’t even matter what Miss Sexy Armpit and I wind up doing for Halloween, it’s more about the costumes for us. This year Halloween falls on a Thursday so most Halloween themed parties and masquerades happened last weekend. Adult Halloween activities usually involve alcohol in large quantities rather than tons of candy, but I kept my consumption to a minimum this time around, mainly because I was wearing a mask.

Whether you know me personally or you just enjoy reading the site, you know that I’m pretty serious about Halloween. Even before October arrives, I start looking at all the events and masqerades in our area and the costume making commences! Not since I was a kid have I actually purchased a costume at a store. I prefer to put together my costumes using my creativity. Miss Sexy Armpit and I tend to put a lot of time and effort into making our Halloween costumes. How do I decide on what I am going to be? Well, it’s 90% inspiration and 10% feasibility. If I’m overcome by a feeling about a character a couple of months prior to Halloween and pulling it off is within the realm of possibility, that’s how I arrive at my choice.

As a kid growing up in the ’80s, I loved villains. I still do. The 80’s had some of the best villains especially from cartoons. I was a fan of Real Ghostbusters, but I was also a huge fan of Filmation’s Ghostbusters. It confused a lot of my friends back then when we discussed Ghostbusters because you’d have to specify which one you were referring to. The thing with Filmation Ghostbusters is that it didn’t seem to have the same widespread appeal that Real Ghostbusters did, probably because it wasn’t connected to a blockbuster summer movie. It was popular for a short time, but I remember having the hardest time finding a Prime Evil figure (I still can’t find one unless I pay a fortune on eBay!). 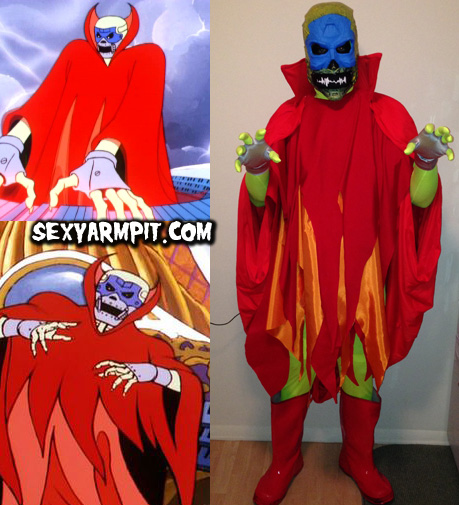 Prime Evil, the main villain, was so cool looking and he was my favorite part of the show. The fact that I have such great memories of the show and the character reminded me of something out of horror movie, Prime Evil was my choice for Halloween this year. He’s been on my mind for the past few years, but I didn’t think I could pull it off without looking too cheap. Intensifying my inspiration was the fact that Prime Evil was the most elusive figure to me as a kid. I rarely went crazy looking for a specific figure unless it was from LJN’s WWF line or later in the Kenner Batman Dark Knight Collection line. He’s the one that got away! My goal this year was to base the costume off of the action figure that I never owned.

Usually, Miss Sexy Armpit and I begin working on our costumes in early September, sometimes even late August. This gives us ample time in case we run into any unforeseen difficulties while creating the costumes. This year was no different.

One of the biggest challenges I faced was finding the right mask to use. Creating one myself wouldn’t have been the best idea because it would’ve looked like shit. Early in the summer I started scouring the Internet for online stores that had a proper mask that could work as Prime Evil mask. I finally found a couple on Amazon and ordered both.

Neither mask instilled me with any confidence that I’d be able to pull this off. One was latex that flapped around and got all bent up in transit and the other felt like it weighed about 40 lbs and hurt like hell when I put it on my face. The heavy one, which was basically a Terminator Series 800 mask, didn’t cover my entire head, but it did have a cool feature: red LED eyes! Actually the eye lights were pretty lame because they blinked incessantly which isn’t an attribute of Prime Evil’s. There was no mouth or nose holes either, so I was able to eliminate that one rather easily. 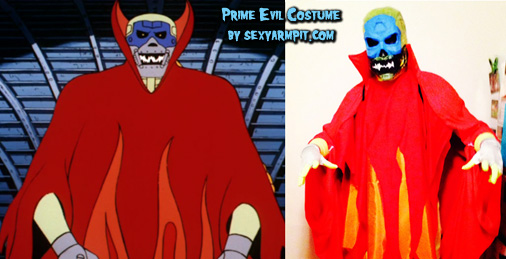 Now, with the decision made on the mask, I began working on other aspects of the costume. At that point I didn’t worry about how I would doctor up the mask, I had a feeling I’d be able to bring it up to Prime Evil standards without too much difficulty and if I couldn’t it would just have to suffice.

In between working on her own JEM! costume, Miss Sexy Armpit lent her ingenuity to the creation of my costume. We picked up some red and orange material and cut it in a similar pattern as Prime Evil’s flowing red cape and gown. We used a picture of him I had on my iPad as a guide while cutting. 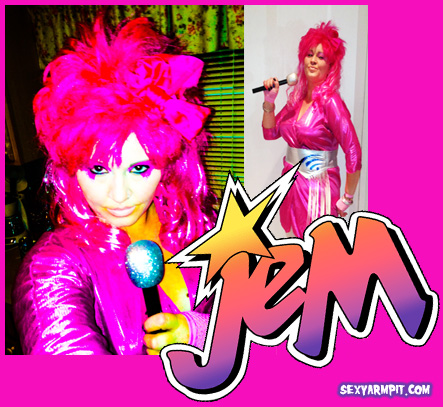 Miss Sexy Armpit did such an awesome job with her JEM! costume. It was mostly homemade except for a few parts that were purchased. I picked up the wig for her and she worked her hair styling magic on it. With her dead-on balls accurate makeup job she looked truly outrageous!

One of the most important aspects of the Prime Evil costume is his pale yellow and sometimes neon skin. Fortunately, Green Man from Always Sunny made those second skin costumes super popular and it was easy to find a similar color to the one I needed. The only issue with that costume is that there’s obviously no eye, nose, or mouth holes, so I had Miss Sexy Armpit cut the face open. The “skin” is a main component to the costume because it pulls it all together. It really did give the impression that I had neon yellow skin.

As for the other details of the costume, I improvised. I found a reasonable long red cape with a big collar on a costume website. I don’t think it cost more than $20 bucks, which was great. As for the gloves, I found silver stretchy gloves that were probably meant for a woman to wear to some ritzy gala in the ’20s, but I got them because they were super cheap. When they arrived, I immediately cut the fingers off. I said “f*ck those fingers,” and bam, I had Prime Evil gloves. The mask took a few coats of acrylic paint. The yellow parts glowed in the dark too! Next I needed to create a fake oscilloscope for his mouth. I found a picture of Prime Evil online and opened it in Photoshop. I cropped and enlarged the sound wave in his mouth and printed it. I cut out a piece of cardboard that I bent on both sides. Then I taped the sound wave picture to the cardboard with black electrical tape. I finished it off by covering all the exposed cardboard with the black tape and pinning it to the mask. The red boots were actually repurposed yellow boots from my Kick Buttowski costume in 2011 that I spray painted red. Last but not least, a little black makeup around my eyes and my costume was complete!

Ultimately, our costumes were hits. Wearing the mask throughout the night proved to be quite a challenge, but provided much comic relief. I had to drink from a straw the whole night. This year’s outing was medicore at best and it definitely wasn’t the fault of our company though. We might as well throw a party at our place because we usually wind up having a better time just taking pictures, having a few drinks, and bullshitting before going out. I wasn’t able to eat with the mask on so I was starving by the end of the night. The best part of the outing was heading over to Hooters for a late night snack. By that time I had to take all my Prime Evil gear off because I wanted to eat without sucking my buffalo chicken sandwich through a straw. How the hell did Prime Evil eat? I wondered that while wolfing down my food. I didn’t really think that part through!