santa is coming to new jersey 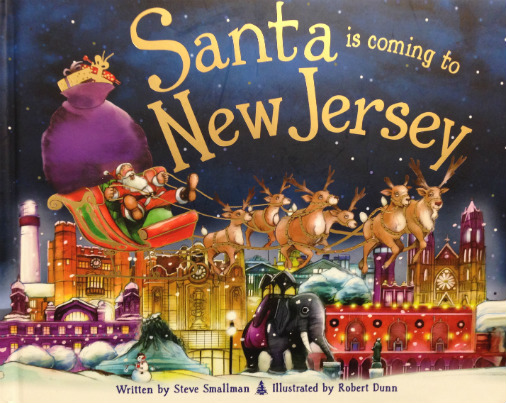 Jolly old Saint Nick delivers presents all around the world. You already know about that though. And you’re aware that he’s so fast, that if you blink, you’ll miss him. Since you were a kid you knew that if you’ve been good all year, you’ll be left with a plate of half eaten cookies and a slew of presents under the tree on Christmas morning. But no one actually sees any of this happen. One way you can experience Santa’s trek, not fully around the world, but around the country, is to take a look at the children’s book series “Santa Is Coming To…” by Steve Smallman. In my case, he came to New Jersey, duh! The question is, was it worth the trip?

This book series is basically Christmas fluff. It’s perfect to read to your young children during Christmas time. It’s not bogged down in detail, but that’s where it fails. The book series squirts some local flavor into each installment, some of which are inspired by states, others by cities around the country. 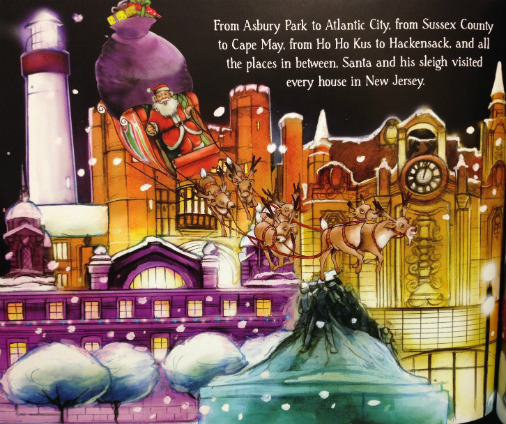 In the book, *SPOILERS, Rudolph the Red-Nosed Reindeer has aged quite a bit. There’s a new, young reindeer, who saves the night for Santa after a blizzard throws the sleigh off course around High Point, NJ. Sprinkled throughout are modern enhancements that the Santa I grew up with didn’t have, such as an On-Star type of talking navigation system.

Critiquing a children’s book feels pretty damn wrong, although, as with most things, I do have one little gripe with it.

My main criticism of the story is that the hero of the book never gets bestowed a name or much of a personality either. The poor little guy didn’t get any credit. He was simply referred to as “the youngest reindeer.” Was the author too nervous to rock the boat that floats around in the lake of Christmas lore? Smallman should’ve been bolder and created his own new reindeer name. We find out numerous times that this new reindeer is young, but we don’t find out much else. He really needed a gimmick. After Rudolph became the most “Hollywood” reindeer, it’s imperative that any subsequent reindeer ups their game. I can’t really figure out if the book was about Christmas in general or this new spry reindeer. There. BAM! I just named him. Spry. If that’s taken by a trademark, why not just call him Vigor or something along those lines? See, I’m an idea man. They should’ve consulted with me first. 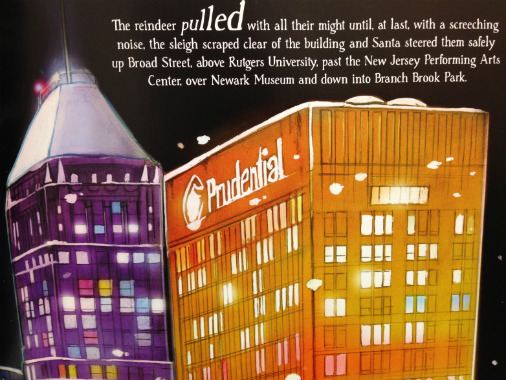 Rudolph was so memorable that Santa’s other reindeer now seem so dull. Each one now needs to have a special characteristic to keep them from boring children. Maybe one of them is able to twirl a basketball on his hoof like a North Pole Globetrotter, another one might be a halfway decent break dancer who’s practicing his ass off to go to the neighborhood break dance tournament, then there could always be that one really smart reindeer who has a genius brain, but feels like he’s stagnating in a nine to five finance position, but his superior mind becomes a great advantage to Santa when he’s called up by the big man in red to help the rest of the reindeer on Christmas Eve. These are all valid suggestions.

Come to think of it, the need to keep this book series generic is where it fails. To plug in all the various locales that the series offers into the same story requires the plot to be very broad, but it’s the lack of details and character development that will hinder it from sitting on your shelf with the other yearly Christmas reads.

The New Jersey aspect of the book was adequate. It’s hard to expect it to be a “tour guide” of the state by any means, but it was certainly pretty cool for what it is. We get to see a couple of nicely done art splashes of recognizable buildings and points of interest in Newark and Atlantic City. The cover of the book is really the best part since it brings it all together, plus it includes Lucy the Elephant and what looks to me like the Loews Jersey City Theatre. Robert Dunn’s illustrations have a vintage quality that remind me of the ones I remember seeing in story books in the library when I was young.

Should you go out of your way to get this book? The story itself is light reading, and since it’s a kids book, you can read it to them in no time. Considering a hardcover copy is $4.99 on Amazon at this very second, I’d say it’s worth it if you are into Christmas and New Jersey or you think your kids will enjoy it. Otherwise, you’ve seen all you need to see in this post. Santa is Coming to New Jersey will entertain the kid with a low attention span in your life during Christmas time, but it will never take the place of children’s classics like The Polar Express and How the Grinch Stole Christmas.