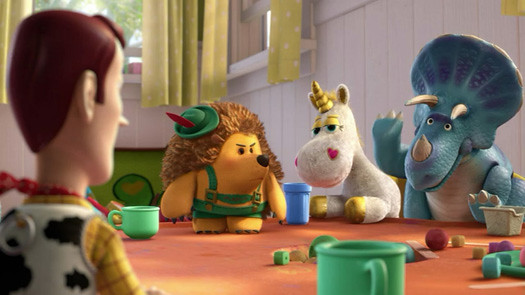 Woody, Mr. Pricklepants, Buttercup, and Trixie in Toy Story 3
WOODY: “…Hey guys look I don’t know where I am!”
TRIXIE: “We’re either in a cafe in Paris or a coffee shop in New Jersey…”

I’m all for a company who milks their properties for all they are worth. Sometimes though, Disney really scrounges. For instance, I had no idea there was a third installment of Cinderella, let alone a sequel! Yes indeed, you can look it up for yourself, Cinderella 3: A Twist in Time went straight to DVD, and so did Little Mermaid 2: Return to the Sea. There’s also a Little Mermaid prequel, Peter Pan 2, Fox and the Hound 2, Lilo and Stitch 2, Tarzan 2, Mulan 2, Lady and the Tramp 2, Pocahontas 2, 101 Dalmations 2, and perhaps the most baffling…The Hunchback of Notre Dame 2. Seriously? Journeying into Pixar territory we have Cars 2, and today’s movie: Toy Story 3.

When the original Toy Story was released in 1995, I thought it was an incredibly imaginative film, and I still do. The Toy Story franchise is one of those Godfather type instances where the sequel may actually be better than the original, or at least funnier. I never thought I’d see a follow up to TS2 10 years after the sequel was released, but leave it to Disney! While I still love TS2, part 3 was pretty friggin’ great also.
Although I thought it was released too long after Toy Story 2, there were a couple of things I loved about Toy Story 3. First, the story continued in a perfect way. In case you haven’t seen it I won’t spoil too much, but I identified with the film because when I was a kid my Dad broke it to me that I was growing up and I needed to part with my toys because I wasn’t a kid anymore. We gave a lot of my toys and action figures to the local day camp – a catastrophic event that I’m sure a lot kids endured. It was pretty frigging devastating for me, but as we see in Toy Story 3, it’s more devastating for the toys!
The casting of Michael Keaton as the Ken doll scored major points with me. The world always needs more Michael Keaton. I miss seeing him star in movies and we need him back in a big way. His voice role as Ken allowed him to go back to his comedy roots and really do what he does best. When I first watched the movie I wasn’t even aware that Keaton was going to be the voice of Ken so it was a cool surprise. There’s nothing like hearing Michael Keaton play one of the most famous dolls of all time. He plays Ken very vain, but with a wink. He brags about his dream house having an entire room just for trying on clothes and compliments Barbie on how much he loves her legwarmers. I’ll tell you one thing: Taylor Lautner couldn’t have pulled that off!