Naturally the JERSEY DEVIL would be found
in the back of a DINER, another thing Jersey is famous for!
Nickelodeon’s recent purchase of the rights to the Teenage Mutant Ninja Turtles has excited me quite a bit. I’m hoping to see the Turtles return to their fun, pizza eating ways again. The heroes in a half shell provided the best entertainment when they were all about “duuude” and “cowabunga.” I understand that the Turtles were originally conceived to be darker and edgier, but I was introduced to them in cartoon form in 1987. I’ll take Shredder, Krang, and Bebop and Rocksteady any day. F-ck it, give me Venus De Milo too. I’m cheesy, I know.
Even though I’m a sucker for animation and rubber costumes, 2007’s TMNT offered three things that the other Turtles films didn’t. One of my favorite actresses, Sarah Michelle Gellar, as April O’Neil, as well as cameos by Kevin Smith and the Jersey Devil! My only complaint is that Corey Feldman didn’t voice Donatello!

When Raphael goes out on the town as the Nightwatcher, he winds up in a pier 6 brawl with the Jersey Devil in the back of a diner. The Jersey Devil happens to be one of the 13 monsters unleashed by Max Winters in the film. As they wrestle around the kitchen, Big City Rock’s version of “Black Betty” blares in the background. 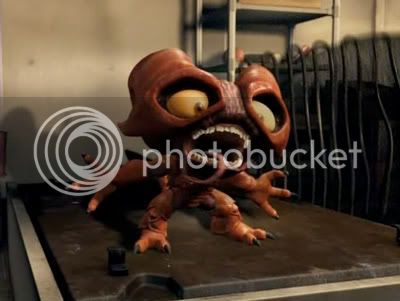 Leave it to a pint sized, excitable creature from New Jersey to start a fight with a mutant turtle that’s 3 times his size. During the scuffle, Raph referred to JD as a “hermit crab,” which is an accurate description of this interpretation of the legendary monster from the Pine Barrens. Although it is likely the tiny creature you see in this film is intended to be the same Jersey Devil who hangs out in the woods of southern New Jersey, there is no official reference to it in the movie.

Before TMNT was released, I thought it was destined to be one of my future favorites. After seeing it in the theater on opening night, I left wishing it was less serious and more like the ’80s cartoon series. It seemed like a huge win for fans of the original comic book with its grittier action and dose of drama. The film looks visually outstanding but lacks the ‘toonish charm of the ’80s TV series. Back when the cartoon first aired, I was embarrassed to admit that I liked it since I felt that I was not only passed the appropriate age for being a Turtles fan, but also that I was a staunch Bat-fan. Teenaged turtles who knew martial arts, skateboarded, and ate pizza seemed like a lampoon in comparison to a dark, serious, brooding detective. Regardless, I watched the show every day, especially in the mornings when I ate my cereal.
The recent animated TV incarnation of the Turtles left me unfulfilled. Instead, the ’80s cartoon style of the Turtles appealed to me more. Aside from its excellent aspects, the 2007 TMNT film did a fantastic job of capturing a nice mix of the various character styles, but in film form I still prefer the live action Teenage Mutant Ninja Turtles films.
*Check out Thomas Perkins blog, the man who originally designed the character of the Jersey Devil for the TMNT film!
www.SexyArmpit.com