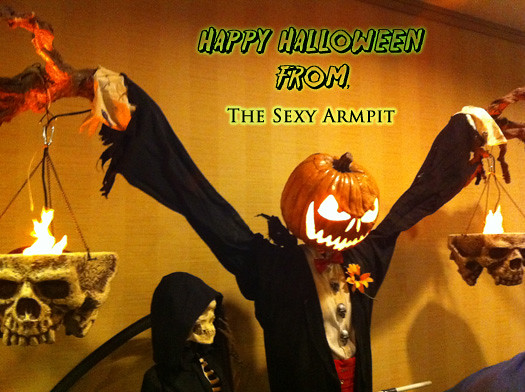 I took this picture last night at the Chiller Theatre convention in Parsippany, NJ. There was a host of celebrities there for autograph signings and I was able to meet with stars from Dallas, which might sound odd to you, but was awesome for me! I also spent way too much money but got a lot of cool stuff though.

I hope you all enjoy your Halloween weekend. I’ll be posting pictures of my costume tomorrow which has been kept a secret to everyone I know thus far. I’ll be headed to Asbury Lanes for the Disco of the Damned party. It should be a fun time! From there it will be back to regularly scheduled programming here at The Sexy Armpit. If you have stopped by throughout the month for the Countdown to Halloween, I greatly appreciate it. The Sexy Armpit has had record hits this month and it’s because of your continued readership. Thank you so much!