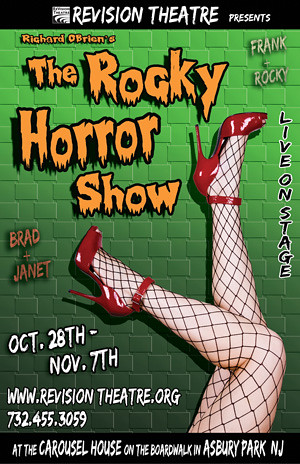 On October 28th, 2010 I attended an electrifying performance of The Rocky Horror Show presented by The ReVision Theatre in The Carousel House on the boardwalk in Asbury Park. I had no idea there was anything going on in the Carousel House, and it’s great to see that The ReVision Theatre may find a permanent home there, if they can raise the funding. If you haven’t been able to catch the show yet, you still have time since they’ve extended the run through November 13th! If you’ve seen the 1975 film, but never a stage production of Rocky, it’s a whole different experience!

If sexual innuendos, and bisexuality make you feel uncomfortable, then you can stop reading this now. I always seem to run into plenty of people who have never seen The Rocky Horror Picture Show in any form, and much of the time it’s because they think it “looks weird,” or they don’t dig transvestites. I say lighten the f*ck up! It’s one of the most fun shows you will ever witness. Although, I can see why some folks may be apprehensive to step into it’s erotic world of sci-fi, horror, and comedy. It’s the one aspect of Rocky Horror that I don’t like…the audience interaction.

While the majority of hardcore fans of Rocky Horror have memorized the lines, crowd retorts, and what to throw at the stage and at what time, it gets old really quick. Having to shout “SLUT,” every time someone utters the name “Janet” is annoying. Tying to pay attention to the dialogue becomes extremely challenging. The crowd lines become a whole seperate script you need to remember so they provide you with help via word bubbles Pop Up Video style on the set’s big screen above the stage. Those types of jokes are funny the first few times but it tends to make people shy away, especially when newbies hear terribly embarrassing stories about being a “virgin.” Believe me, that part is not as bad as you may have heard.

Since it’s tough to beat the production values of the Broadway version of Rocky Horror that ran in the early 2000’s, it wouldn’t be fair to compare the two. Scoring the likes of Sebastian Bach and Joan Jett is out of the realm of possibility, but the Asbury Park show still manages to go over the top, even without big name stars. In fact, having Chris Hall in the role of Frank N. Furter made this show more genuine. He was definitely inspired by Tim Curry’s Frank, and more flashy and brave than actors who have previously portrayed the character in the New York productions that I’ve seen.

With a freakish frizz of fake hair on top of his head and a wild makeup job on his face, Hall strutted around stage like he owned it. There was even a moment when he accidentally kicked a stage light and it broke. He nonchalantly referred to it while in character and the audience loved it. Hall was so comfortable in the part that I hope when some asinine filmmaker decides to remake RHPS, that they consider Hall for the role. His Frank N. Furter was glittery and his soaring vocals grabbed the audience by their sack…of props.

I did have a few minor issues, but that’s only because I’m forever tied to the film version. Hernando Umana’s Riff Raff had green hair, and looked less like Richard O’Brien in the film and more like The Joker. Umana’s voice was incredible and he added in some very entertaining mannerisms, so I’d say he’s in the right business. The narrator, played by Brett Colby, had great comedic timing, I wonder if he does stand up? Tap dancing and tripping on drugs and into our hearts was Jesse Wildman as Columbia. She was a lot of fun to watch and provided a fresh take on the character. And as Janet, actress Jennifer Bowles was hysterical as she humped various parts of the stage and writhed around in her underwear during “Touch-a Touch-a Touch Me.”

The last couple of gripes I had may have been fixed by now since I witnessed the first show of the run. First, some of the special effects cues were out of sync. For instance, when Janet changed channels on the TV screen, the last channel came up too late, well after she stopped changing channels. Little details like that happened with the big TV screen several times. There were also instances when some of the audience interaction prompts were not the same as what the crowd was yelling. And finally, certain sections of seats were different than others, and even though ours had little pillows on them, they were uncomfortable to the point where I would have preferred sitting on the floor.

Overall it was a great time for a very reasonable price, and an easy drive on The Garden State Parkway! Support local independent theater and check out The ReVision Theatre website for more info!