Can you imagine that much of the younger generation knows Susan Sarandon from SNL’s “Mother Lover” sketch? I wonder if those same kids would be surprised that she was also quite a hot little number back in her day. Back in her day started about 40 years ago in 1970’s Joe, her first film role. Since then, out of the long list of movies Susan Sarandon has starred in, her performance as the innocent, yet sexy Janet Weiss in 1975’s The Rocky Horror Picture Show is still one of her most memorable. 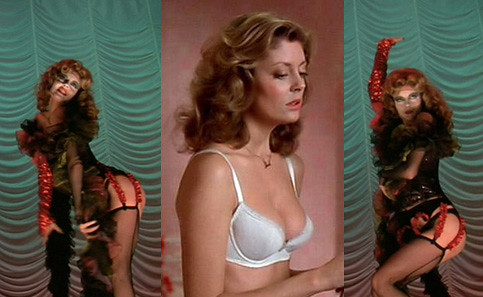 Sarandon has had many standout performances and coincidentally, one of her most notable is actually linked with New Jersey. Her role in 1980’s Atlantic City gained her an Academy Award nomination for Best Actress. Sarandon’s film choice is not always predictable or safe which is apparent when scanning her filmography. She’s starred in films such as The Hunger, The Witches of Eastwick, and Thelma and Louise. In the pop culture department, Sarandon starred as Queen Narissa, a badass witch in Disney’s Enchanted, as well as The Simpsons, the live action Speed Racer, and as a guest on Sesame Street.

As you can see, Susan Sarandon certainly has had an impressive career thus far, but she’s most notorious for her knockers, and you can admit it, we’re amongst friends here, you know you want to touch-a, touch-a, touch-a, touch them! So, here’s to you Susan Sarandon! Who the hell needs a lifetime achievement award when you have the honor of being October’s Garden State Playmate?!?!