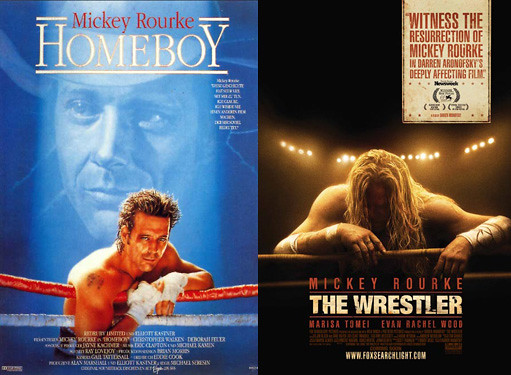 If you thought The Wrestler was simply the wrestling version of Rocky, after reading this post you’ll think differently. The immense amount of similarities between 1988’s Homeboy and 2008’s The Wrestler make them more suitable companion films. The Wrestler, came 20 years after Homeboy, but both star Mickey Rourke and are filmed in New Jersey. Now join me at ringside as we pit boxer Johnny Walker vs. former wrestling superstar Randy “The Ram” Robinson…

Both The Wrestler and Homeboy’s New Jersey setting and stirring cinematography transported me directly into their respective main character’s agonizing world. While The Ram was your typical beefed up bleach blonde babyface who has seen better days, Homeboy’s Johnny Walker had shorter hair, and a western flair, but they were both equally beaten down, fading athletes.

Randy the Ram was grappling with his own demons and masking his pain with drugs, but Johnny Walker put himself in danger when he merely stepped into the ring. Walker also continued to align himself with an underhanded promoter prick only out for the purse, Christopher Walken’s Wesley Pendergass. It was easy to feel bad for a weathered, wandering cowboy who was being manipulated by a sleazy low level crook. As Pendergass, Walken is so Walkeny that you’d think he’s doing an impression of himself. This is classic Walken.

During the making of the two films, Rourke had more difficulty adjusting to training to become a wrestler since he had previously been a boxer for several years before pursuing acting. His bio on Wikipedia reveals that he suffered at least two concussions during his early boxing matches. His ring experience in real life clearly lent authenticity to both roles. Rourke even used Guns n Roses “Sweet Child o’ Mine” as his entrance music in his boxing bouts, while Randy “The Ram” Robinson chose to use the same song in the last match against The Ayatollah in The Wrestler. 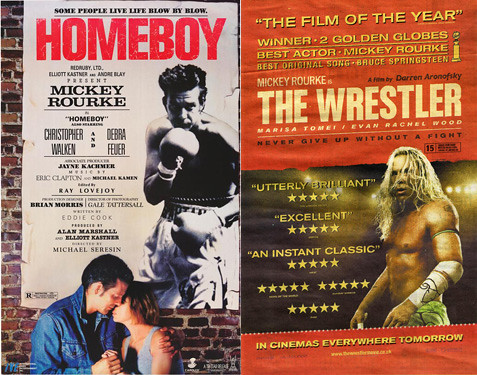 In 1997 singer Paula Cole begged to know “Where Have All The Cowboys Gone?” Homeboy might not answer that question precisely, but after watching the film it’s obvious that all the cowboys slash boxers have gone to Asbury Park. Considering that Rourke wrote the screenplay for Homeboy (under his nom de plum “Sir Eddie Cook) and that he went back to boxing after his declining movie career, Homeboy becomes even more poignant. Although there’s many differences between boxing and professional wrestling, there’s almost no separation between Rourke, Johnny Walker, and Randy “The Ram” Robinson. Throughout his own boxing career, in addition to concussions, Rourke suffered a number of injuries such as broken bones, a compressed cheekbone, and short term memory loss. All that plus accusations that he was washed up as an actor fueled his performances in these films.

What isn’t fair to Rourke as an actor and a writer is that his performance as Johnny Walker in Homeboy is no less striking than his acclaimed role as Randy “The Ram” Robinson in The Wrestler, but Homeboy quietly resides simply as another minor notch on his filmography. Even without a fraction of the dialogue that Randy the Ram was supplied with, I still rooted for the enigmatic Johnny Walker. Through Rourke’s mannerisms and expressions he portrayed a boxer who was frequently mentally absent, but kept moving in life as well as in the ring. He was quiet and dumb, yet he yearned for the simple embrace of a woman named Ruby, played by actress Debra Feuer, Rourke’s wife at the time.
Mickey Rourke’s personal life and career bled into both Homeboy and The Wrestler. Both films are emotional and heartbreaking and leave you stunned as if you were hit with a knockout blow. I urge you to watch Homeboy to see what could be considered the precursor to The Wrestler. I wonder if Darren Aronofsky has seen it?