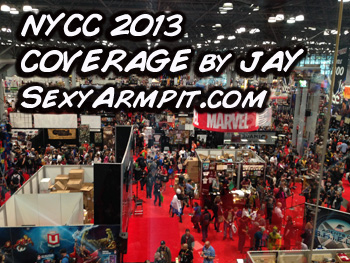 We’re taking a brief break from the Halloween Countdown, and boy do I mean brief. I’m only 2 sentences in and I already want to get back to celebrating Halloween. New York Comic Con needs to happen in November. October is exclusively for packing in the most Halloween fun as humanly possible, not getting caught up in geekery and action figure exclusives…well there’s always a little room for that. New York Comic Con 2013 is now history, and I must say, if it weren’t for an insane headache and stomach ache, I had a good time. Of course, as usual, I have reservations about it though. Join me and I’ll tell you all about my experience this year at the Javitz Center.

This is only my 3rd official Comic Con which means in comic geek circles I’m an amateur. Not really though, because you only need to go to one of these boundless events to grasp how they work. I was always under the impression that Monster Mania and Chiller cons were chaotic, but they’re super tame in comparison. Comic Con literally brings in people from all over the world and packs them into the Javitz Center to the point where you can walk without getting jabbed by people’s costumes. You can’t walk through anywhere without asking people to let you get by because everyone is staring in awe at everything they pass. The amazing part is, only a fraction of these people read comics. 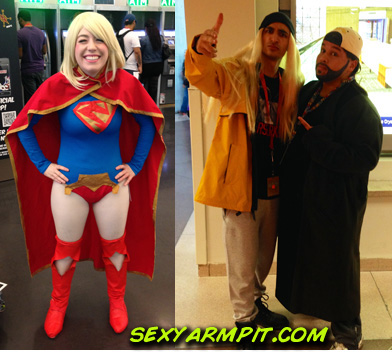 I wouldn’t go a full post about comic con without posting the most bubbly and friendly Supergirl I’ve ever met. And what kind of cosplay does a New Jersey Pop Culture Blog post?
Jay and Silent Bob cosplay of course! Snootchie Bootchies!

One of the main reservations I have about this event is that comic books and their artists haven’t been the main attraction in many years, and they obviously should be. The only reason I go to these is to meet the artists whose work I admire, and to possibly pick up some of their prints. Comic Con has become more about big time companies promoting their wares and cosplayers promoting themselves as a brand (nothing wrong with that, but some cosplayers are truly into the comics and the scene, while others just go as a chance to get pictures taken of themselves). Plus, don’t go thinking you’re going to get great deals on ANYTHING…cause you aren’t. 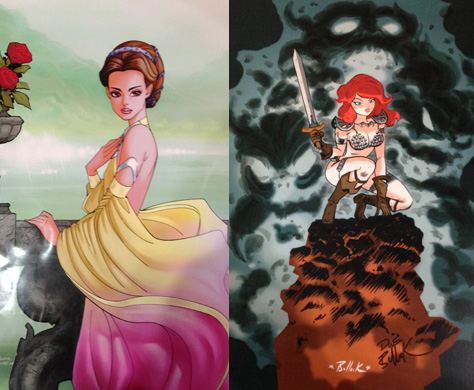 Smaller scale comic book conventions are great for fetching you a ton of dirt cheap comics. Comic Con has tables with comic book sellers, but those prices aren’t that much more reasonable than what you’ll see on eBay. So, going for comics isn’t the best idea. Besides, I get my comics through Comixology anyway, so that solves that. 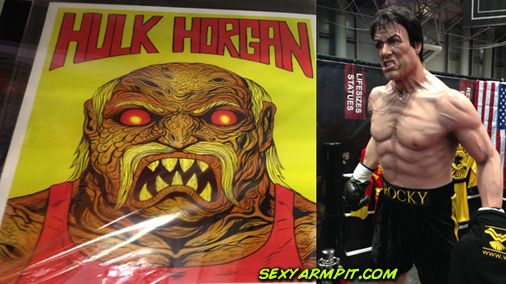 The big comic book companies were there in full force, well, at least some of them were. Marvel was mobbed and they were doing gangbusters business. As expected, their booth was one of the most visited on the floor. Conspicuous by its absence was a DC booth. I looked all over for it, but little did I know that there was no DC booth on the con floor! I didn’t consult with the 380 page program that they handed me when I walked in, nor did I download the app in fears that I’d use up more battery power on my phone. If I did look at any of those things I’d probably know that the DC booth was tucked in a hallway far, far away. Once I finally found the limp DC booth about an hour after I arrived, I was so disappointed at what little they had to offer.

The DC booth had all the Superman movie costumes through the years displayed in glass cases. There was a DC video game station and a few other minor details, but nothing that enticed me to stay there longer than a minute or two. I didn’t see much in the way of free crap either. 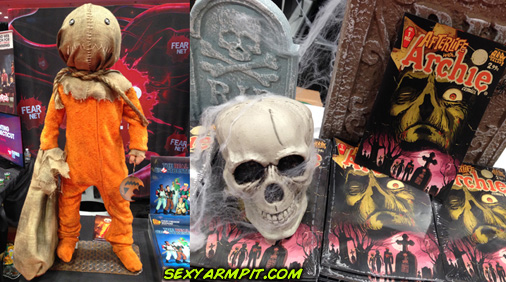 I haven’t watched our little friend Sam yet this Halloween season. Trick r Treat is on my watch list for this week and Afterlife with Archie is on my reading list.

Free crap is another big reason why people go to Comic Con. People love free crap. I learned my lesson from past Cons though. I used to take one of whatever was handed to me or available to grab. In the past I wound up with a giant bag of random comic con freebies that I didn’t know what to do with. I wound up trashing most of it and whatever was good enough to keep I gave away to whoever wanted it. I didn’t take one thing this time. OK, blatant lie. I DID take a Real Ghostbusters poster that FearNet was giving away. But that was it, I swear. 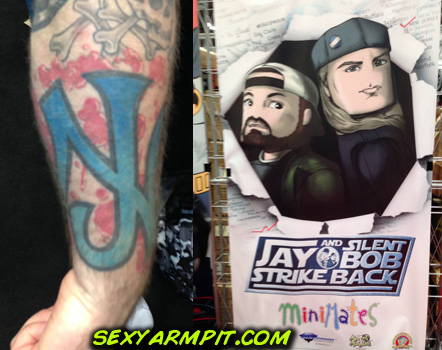 Some NJ ink in the style of the NY Yankees logo and
a poster for the new Jay and Silent Bob Strike Back MiniMates!

One obstacle with Comic Con is that you literally have to search for a way to keep your shit all together. Unless you come prepared with a giant bag or Uhaul, you might find yourself with a handful of stuff and you may find yourself in another part of the Javitz Center and you may ask yourself “where does that hallway go to?” IT GOES NOWHERE. IT GOES TO THE BATHROOMS. IT GOES NOWHERE YOU WANT IT TO GO. I REPEAT IT DOES NOT GO TO ARTIST ALLEY IF THAT IS WHAT YOU ARE LOOKING FOR. And I ended up stealing a new garbage bag off the janitor’s garbage bin in order to hold all my stuff. Couldn’t find a damn bag anywhere. If they want me to come back they need to offer me a huge bag as soon as I walk in.

Anyway, good luck finding Artist Alley. You’ll have a better chance finding it if you wore ruby slippers, clicking your heels together, and letting a twister bring you there. For me, that’s the stuff I want and they bury it all the way on the other side of the building. Even on an extremely high speed people mover it would take you 39 minutes to get there from the main entrance. Screw that! 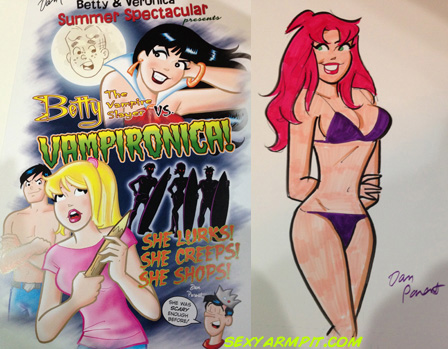 Went to say hello to Dan Parent who I’ve met a few times and he was very cool as always. I bought a couple of pieces of art from him since I’m a fan of his and of Archie Comics in general. Here’s an original piece of Cherry Blossom and a print of Betty The Vampire Slayer vs. Vampironica. An excellent choice for Halloween!

A few of the toy booths I visited had some cool items that I was enticed by, but it turned out that the sellers weren’t at the table at the moment and they put random dudes in charge of their table. Said dudes knew nothing about pricing on anything and they weren’t authorized to make any sales themselves, so basically they were there to make sure people didn’t steal shit. That’s great for the person who was running the table because if they were in the mood for a sausage sandwich they could go grab one, but sucked for me since I stopped by the tables 6 times. I SAID I STOPPED BY THE TABLE 6 TIMES. 6 TIMES! Man I hope you get that reference. These guys were missing out on a possibly lucrative sale. Wait, what am I saying? What am I going to do with a repainted Skeletor figure that is supposedly rebranded as “art,” for $145 dollars. That’s just utterly f*cking ridiculous.

Go to take in the sights! Stay and absorb all the cosplayers hard work! But, most importantly, support the artists! The big major companies who are strategically situated on the con floor can afford it if you bypass their kiosk that’s merely serving as a sign up center for their silly e-mail list, so next time you go to Comic Con, head straight for Artist Alley and spend a good chunk of your time there. That’s where the magic happens. Literally. The con wouldn’t exist if artists and writers didn’t create the comics in the first place. Otherwise it would just be called New York Con and that’s just a dumb f*cking name.