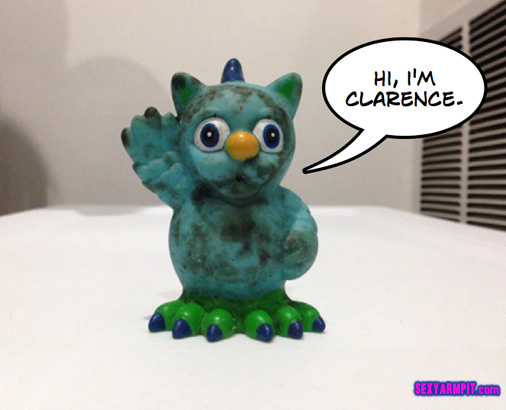 You may not know this side of me, but I consider myself very humane. As much as I badly want a cat or a dog, I can’t get one at this point for various reasons, so that’s why it was a bit of a miracle that we found this little guy.

Or should I say Miss Sexy Armpit found him. I met my new friend recently when I was taking photos in her yard for my Bill and Ted’s Weird NJ Adventure digital comic. As I was wrapping up, I started gathering up the figures into a box and then she asked me “Is this guy yours too?” as she pointed to a small object on the ground. I barely saw anything aside from the fall leaves blanketing the grass, plus it was getting dark. I squinted my eyes and eventually saw a tiny blue rubber looking toy peeking out of the leaves. I hesitated before I picked it up because it looked dirty as hell. Was it a Smurf that got coughed up and spit out of her chimney and is now sleeping under the leaves? Whatever it was, it seemed as if this little toy was laying in mud for quite a long time, and possibly inside a dogs mouth (or some other body part) at some point.
As if he was going to run away from me, I reached down and grabbed him. I examined him in my hand and realized he was a cute little blue creature who seemed harmless. Creature is really the best way to describe him too. I couldn’t really tell if he was a sea animal, an alien, or a baby dinosaur. Whatever he was, I deemed him worthy of giving him a good home or he would probably wind up on the Island of Misfit Toys.
Who knows where he came from or where he’s been? He could’ve blown into the yard last year during the hurricane for all we know. It was a good thing I brought him in when I did because it was the first really chilly night we’ve had this season and he might’ve caught a cold.
After bringing him inside, I left him alone for a few hours because he was very timid and scared. Once he got himself acclimated, I gave him a bath and he loved it. Although, as much as I scrubbed I couldn’t even get him 100% clean. Some of his stains are permanent. We’re not ruling out cosmetic surgery at this point, but his appearance has improved immensely, wouldn’t you agree? I was even able to read the bottom of his feet that said he was made in China by the Toysmith company as recently as 2010. Could’ve fooled me. Looks like he’s been around since at least 2005. 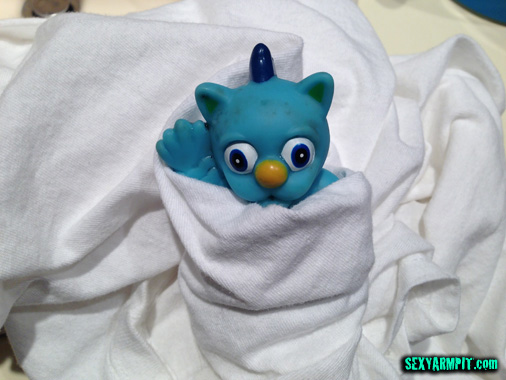 The bath must’ve perked him up and put him in a better mood because right after that was when he started talking to me. He said “Hi my name is Clarence.” “Hi Clarence, I’m Jay!” I shot back exuberantly. To be honest, I was so friggin excited to discover that he could talk! How cool was that? “Do you feel better now that you’re clean?” I asked him, in hopes he’d continue to engage. “Hi I’m Clarence.” Okay, well he only knows that one line. I guess it’s better than nothing, but that shit’s gonna get old real fast. That was kind of a let down. I had my hopes up thinking that it might be like having my own version of Ted. Maybe in time he will open up to me. I didn’t wind up teaching him any new words yet, but I have learned a few things about him:
I found out that he has an affinity for grapes…and stealing mine. 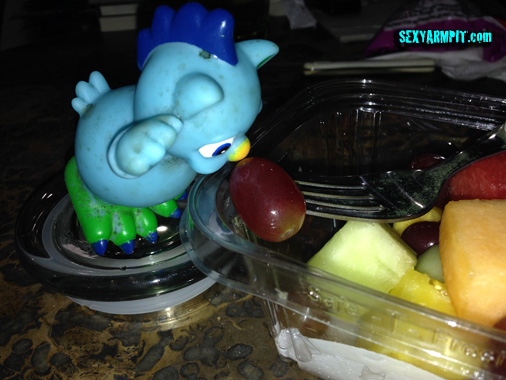 …and being insanely cute while rowing a canoe in a bubble bath. 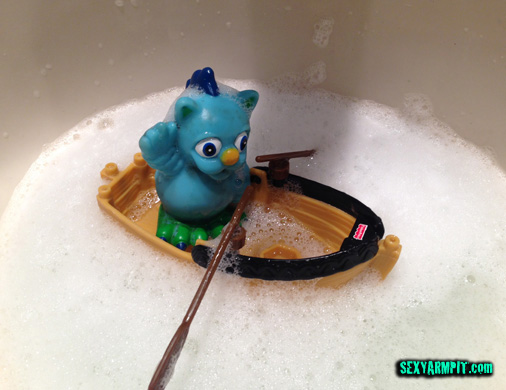 Look, how can you ever be mad at him, he’s permanently waving hello! To see how happy he is now and how quickly it took him to adjust, I can’t help but wonder if he’s going to grow into some sort of an evil demonized Boglin or something. I hope that’s not the case because I’ve made it a point to formally adopt him as my own. I gave it my best shot to find his family and after some research I found that he comes from the obscure non-specific species “Bath Squirt Toy.” The closest toy line he might belong to is Munchkin Squirtin’ Buddies, but that’s just a hunch. By the way, be careful if you Google that…Squirtin’ Buddies. No…really. 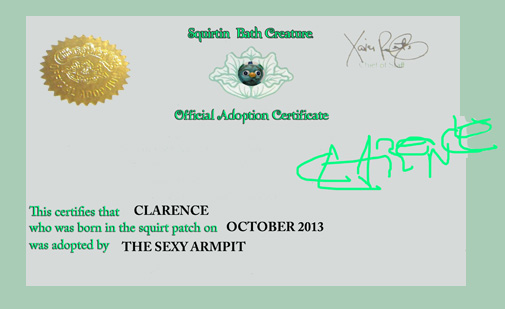