Where were we? Snowstorm is looming. I’m just pulling into the Trop.

If you’re the geek/fanboy type like me and you’ve never been to the Tropicana in Atlantic City, there’s one thing that will strike you about it. Their parking garage is almost a replica of the one you see in The Dark Knight where Batman utters the greatest line in movie history “I’M NOT WEARING HOCKEY PADS.”

There’s never a time when I’m entering the Trop that I don’t pretend that I’m Batman in the Batmobile Tumbler navigating the wild mouse roller coaster-like turns and insanely steep inclines of that parking garage. It’s like a ride in itself. It’s also one of the more inviting garages in all of Atlantic City, because each and every one of them is abysmal. Bringing yourself to a near heart attack, getting rear ended, and not understanding the signage are constant possibilities in A.C’s parking garages. At least at the Trop you can pretend to have a run-in with Scarecrow and his goons. 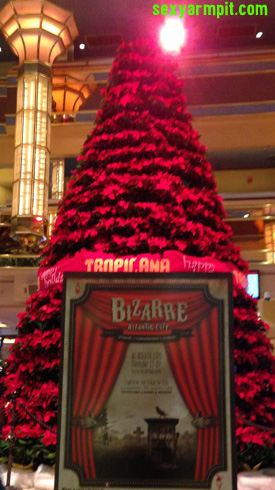 Aside from the nasty accident I passed earlier, things were going strangely smooth. I even found a parking spot about 20 feet from the elevator to the casino. This translates to “I was meant to go to this thing.”

Once inside the casino, it did seem a bit light on people. Is online gambling in NJ taking away from attendance? It’s possible, or it was just the shitty winter weather putting a damper on people’s weekends.

The setting of the Bizarre Expo provided a refreshing change compared to the other conventions that we’re accustomed to. Holding the event at a casino adds a bit of glitz to what’s usually just a bunch of people standing around a hotel lobby or convention room when you really think about it. Chiller and Monster Mania, I love you guys, but the hotel setting is limited and does grow a bit stale. There comes a time after 20 years of a convention that it needs to graduate to the next level of facilities. Bizarre skipped a grade. If only it went to school in the Spring time.

What’s cool about having the expo at the Trop, is that you’re right on the boardwalk looking out at the freezing Atlantic Ocean. Since it was bitter cold, walking on the boardwalk is an activity reserved for those of us on shrooms, people who like running, and those who don’t mind a little hypothermia now and again. Here you have the option to gamble, or you can get really drunk and then walk through two big horror convention rooms as well as a movie screening room. I always choose the horror option. 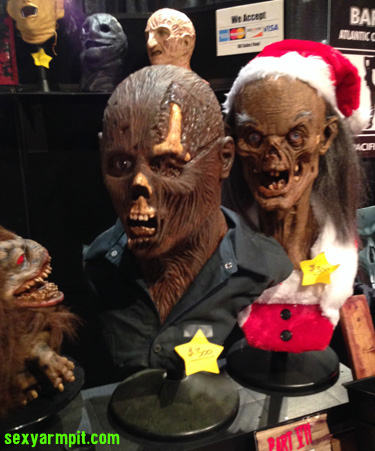 After I got situated and registered, I made my way into the first large convention room. This room housed the aptly named Bizarre Bazaar. As soon as I walked in I noticed the “look” of the event. Something about the whole space just looked cool. It’s hard to describe, but it’s possible that it was the lighting. It definitely gave the impression that it was a step above other conventions as far as presentation goes. There weren’t as many merchant/vendor tables crammed into a tiny space in the way we are all too familiar with. This gave them a nice boost since it focused your attention to the tables and the people running them rather than missing stuff in order to navigate through a mob of people.

The Saturday installment of Bizarre had just begun. As the day went on more and more people started filing in. Luckily for me, it wasn’t crowded to the point where you couldn’t walk around comfortably. This is important because I get claustrophobic in crowds. Of course, the promoters of the event probably preferred the floor to be packed with people, but it’s way more frustrating for attendees when it’s like that. I always prefer a larger space that’s less crowded to a smaller space with the same amount of people.

Shannon from Mallrats wouldn’t be too pleased with me since I didn’t have much of an agenda. This was a brand new event and I really wanted to enjoy it and take in the scene. As I strolled around, it was cool to run into a few friends at some of the merchant tables. 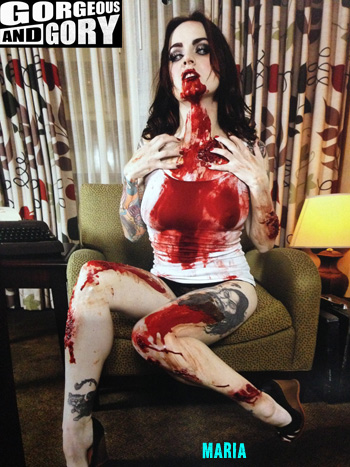 Maria from the 2014 Gorgeous and Gory Zombie Pinup Calendar

My buddy Jess Rajs from Gorgeous and Gory was promoting the new 2014 Zombie Pinup Calendar. It’s filled with hot undead women and it’s a perfect gift for the person with a zombie fetish in your life. She firmly believes this one is their best work yet, and coming from a dude who has all of them, I have to agree with her! Check out some of these incredible photos and head over to http://www.gorgeousandgory.com to get your own! 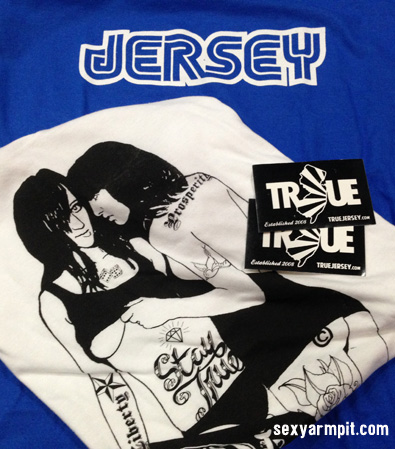 One of the best shops in the whole state is True Jersey. They are proud to be from NJ and all the stuff they sell reflects that. Naturally, I couldn’t walk away without picking up a shirt that I’ve wanted for a long time! Another t-shirt? Really? But, I’ve had this one on my mental wish list for quite a while now. It’s Jersey done in the style of the SEGA logo. Since I was a Master System kid this t-shirt was made for me. Aside from tees and other clothes, True Jersey also offers collectibles, accessories, and housewares. 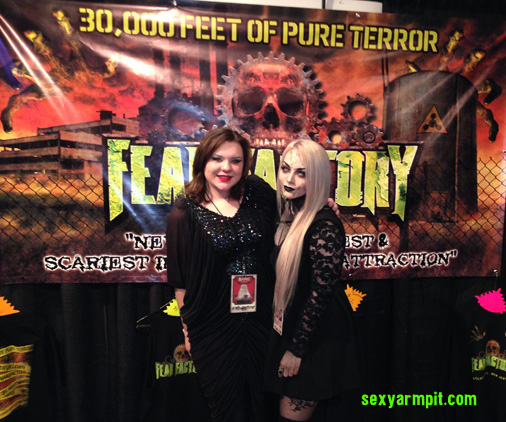 I am a sucker for haunted attractions so I stopped by the Fear Factory Haunted House table. This is a newer haunt that I was meaning to get to this Halloween season, but, prior to its opening, it ran into all kinds of roadblocks from the town and it hindered them from having a proper opening season. Then, after talking to the girls from the haunt, I found out that there’s only TWO MORE NIGHTS of their Christmas haunt, Tinsel Town Terror. Not happy about the idea of missing this. Well, I made it to Bizarre A.C, so perhaps there’s a trip to Mays Landing in my near future for some yuletide terror? 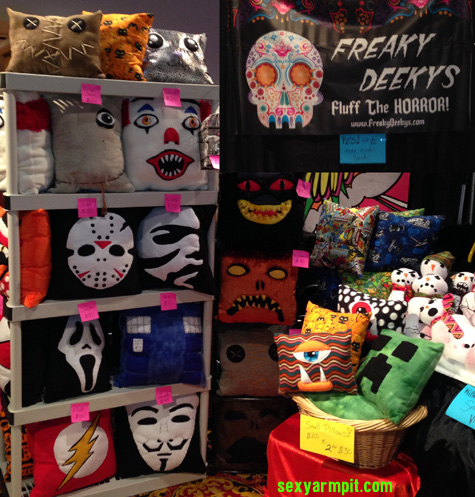 Just so you know, skipping the merch tables and going straight for autographs is never a good idea. You’ll definitely miss out on cool stuff. I did manage to buy ONE Christmas gift. I was hoping to get a few more, but funds were diminishing. But, I will say that the $5 dollar margaritas were pretty cost effective.

The horror personalities were out in full force and Bizarre offered the opportunity to hobnob with them without getting shooed away due to crowds. Just a few of the actors I saw signing and chatting with fans included Heather Lagenkamp, Doug Bradley, Kane Hodder, John Kassir, Bill Mosely, Tom Savini, Alex Vincent, Micheal Berryman, former WWE Superstar Gene Snitsky, and Clerks’ Brian O’Halloran.

One of the Q&A sessions was going on as I was walking around the merch tables. This one was called “Being Jason,” and it featured Kane Hodder and Steve Dash answering questions from the audience about their experiences playing Jason in the Friday the 13th films. This was enlightening to several members of the audience who apparently have never seen or read Crystal Lake Memories.

Just before I made my way down the escalator to the 2nd convention room, I ran into our NJ friend Ryan Scott Weber, writer and director of Mary Horror and Sheriff Tom vs. The Zombies. At the moment, Ryan was screening Sheriff Tom and we were shooting the shit about the upcoming third part of the trilogy called Witches Blood. It’s coming out soon so look out for it! I also talked with the Jersey King of No Budget Horror, my pal Armageddon Ed.

After a while, weather apps and text messages kept alerting me to how bad the snow was getting up north. This meant that I had to miss out on the costume contest and some of the other truly Bizarre aspects of the expo and hightail it out of Atlantic City. In various parts of the state there was already 3 or 4 inches of snow. Oddly enough, the South Jersey area and Atlantic City was spared and only got rained on. As I made my way back up the Garden State Parkway, I was baffled because all I hit was rain. Then, sure enough, around exit 100, I abruptly entered Hoth. The rest of the trip home turned into my very own Twilight Zone episode called Nightmare at 15 Miles Per Hour.

Hosting a convention in December runs the risk of inclement weather. The snow definitely had an impact on attendance, but the expo kicked ass. If you didn’t make it, you missed out because the organizers improved upon horror fans gripes of other local conventions and it showed. Hopefully if this becomes and annual thing, the Bizarre Expo will only get bigger and more enticing next year. You’re going to look back and wish you were at the first one because you know how many jackasses (myself included) will be bragging about how “I was at the FIRST Bizarre Expo man!”