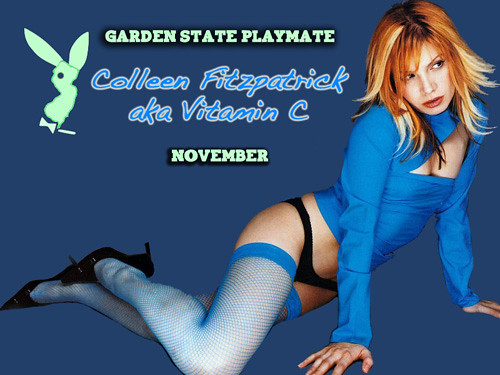 With flu season in full effect I thought you might need some Vitamin C. Let us not forget about Old Bridge New Jersey’s Colleen Fitzpatrick, a singer, songwriter, and actress who is better known as our favorite ascorbic acid. Now, enjoy a megadose of Vitamin C, November’s Garden State Playmate.
Colleen Fitzpatrick graduated from Old Bridge High School in New Jersey and then New York University. Throughout high school she danced professionally and acted in high school plays. If you aren’t familiar with her, Vitamin C enjoyed her biggest surge of success in the the early 2000’s. After her original alt-rock band Eve’s Plum broke up, Fitzpatrick went solo in 1998 and signed with Elektra Records where she transformed from alt-rock chick into dance pop cutie.

After scoring with her debut CD Vitamin C, Fitzpatrick became a household name, even if it was for a short time. The album featured the hits “Smile,” and “Graduation (Friends Forever)” which didn’t do much to cure the common cold, but blew up on the tween and high school scenes. She solidified her place in pop culture when there was a Vitamin C Mattel doll released as well as a lipstick shade by Tommy Hilfiger. Although she was a pop icon of the moment for the younger crowd, she was also recognized as a sex symbol for horny twentysomething dudes when she was included on Maxim Magazine’s Hot 100 of 2001. As an actress Fitzpatrick has appeared in such films as Liar Liar, Dracula 2000, Rock Star, and Get Over It among others.
Even though she’s not in the public eye anymore she continues to create new music. A new Vitamin C album was scheduled for 2007 in addition to an original children’s album by Fitzpatrick, but they have yet to be released. Most recently she has been writing and co-writing songs for tween stars like Miley Cyrus, Selena Gomez, and Demi Lovato.
Here’s Vitamin C’s video for her single “The Itch,” starring another Jersey Girl, Kirsten Dunst!
www.SexyArmpit.com