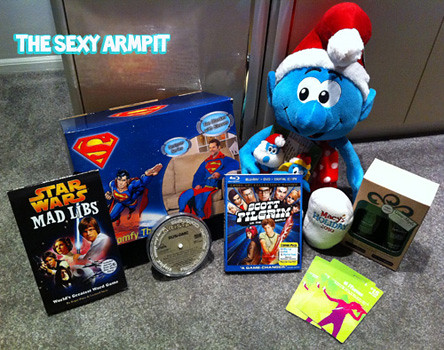 ﻿
I’m not going to sit here and pout about how old I feel or how Christmas doesn’t effect me anymore. OK, so, I admit I can’t watch How The Grinch Stole Christmas if it’s past 8 PM or I will fall asleep on the couch. Naturally, Christmas time has become more hectic as I’ve gotten older, but it’s still one of the most fun times of the year. I don’t know anyone who doesn’t like getting presents (of course there’s always some jackass who says they hate getting gifts), but giving gifts is even more fun. Some of the gifts I gave this year included a custom sculpted Dean Martin statue, an iPod, and a Kitchen Aid mixer. Those items may not intrigue you, but they delighted their receipients. Now it’s time to show you some of the stuff that I got for Christmas. It was impossible to fit every gift into the picture so some of the items are not shown, but I’ll tell you all about them.

My girlfriend knows how I feel about snuggies. But she went out on a limb anyway and bought me the Superman snuggie as a goof thinking that I would get a kick out of it. I think it’s actually really cool. See how the super hero/fanboy aspect changes the perspective of everything? For example, my reaction if you gave me a package of napkins for Christmas: “Oh great…napkins,” but if they had the Bat symbol on them look at how quickly the reaction changes: “OH THESE ARE SOME F*CKING COOL NAPKINS! THANK YOU!!!” Something tells me that those napkins are never coming out of the cellophane! In the end, the Superman snuggie was a fun gift, but not because it’s a snuggie, there’s more to it than that. Donning this snuggie actually transforms you into a comfy, cozy Superman because it has Superman’s costume on the front of it! The only problem is, when I put it on, I don’t feel like saving the good citizens of Metropolis from a disaster, I really feel like zonking out on my couch. It’s a little couterproductive, but at least I’ll be Superman in my dreams.

It’s nearly impossible to buy me a DVD or Blu-ray disc that I don’t already have. There are so many movies that I enjoy but I don’t see myself ever watching again. For me to own a movie it has to have a high rewatchability factor. Such is the case of Scott Pilgrim on Blu-ray because it kicks ass and it’s visually exciting. This was one of the only things I really had on my imaginary wish list. The vintage record album drink coaster set was a really cool gift too. I do have several coasters at home, but these are unique and look exactly like their original vinyl counterpart. (If you have really keen eyesight, you noticed that the one visible in the picture is a RUN DMC album.) There was also STAR WARS Mad Libs! which are even more fun if you fill them in with fellow Star Wars fans. *Here’s an example of what my friends and I came up with: “The Force is an energy field created by all living FECES” (plural noun), and “A Jedi can also use the Force to move objects with his or her TONGUE” (part of the body).

A couple of weeks before reading about it on X-E, I saw the Christmas Smurf plush at Macy’s with my girlfriend and I wanted one to add to my Christmas condo decorations. I was always a big Smurfs fan as a kid, but I have yet to buy any of the new Smurf collectibles. Once the movie comes out there will be Smurfs everywhere, so this is just the Smurf of the iceberg. What makes this Christmas Smurf different from the other ones in the store was that he had a ticket for Lady Gaga at the Prudential Center in Newark attached to his scarf! I don’t care if you want to disown me now that you know that I am a Gaga fan. After seeing Lady Gaga live in concert at Boardwalk Hall in Atlantic City this past July, I rank her show just below a KISS concert. It’s a huge production that has a storyline, elaborate choreography, and music that she pours her heart and soul into.

As you can see, I was very fortunate and Santa Claus treated me well this year. I also received plenty of nice shirts, ties, a scarf, tea tree shampoo, money, and gift cards. Thank you to everyone for the AWESOME gifts! What were some of the gifts you received this year?