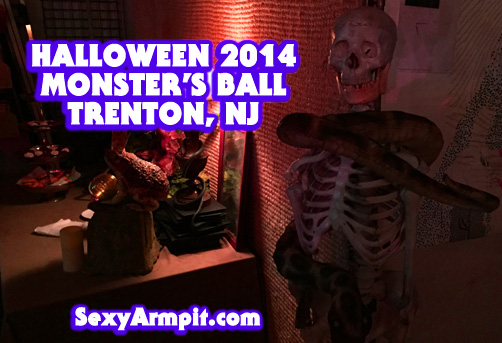 View our Flickr Album from this event for larger photos here:
https://www.flickr.com/photos/sexyarmpit/sets/72157648613469690/
Last Saturday I worked on my costume right up until the moment I walked out the door. Where was I off to? The Trenton Artworks Monster’s Ball which was a masquerade-art show-concert-party. Have you ever been to one of them? Well, neither have I, until now! We had a blast and it wouldn’t be a Halloween celebration here at the blog unless I documented the festivities for you, so here we go!

As I mention here every year, choosing who I want to dress up as for Halloween is never easy. I need some sort of divine inspiration, which sometimes doesn’t come until the very last minute. This year, I went with a character that I wanted to tackle for about 6 or 7 years now, but didn’t think I’d be able to pull it off properly. 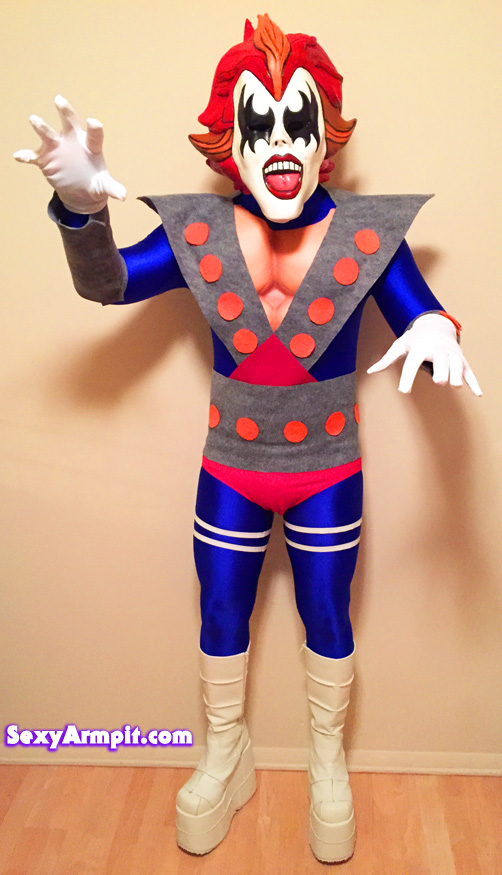 The Diabolical Disc Demon a.k.a The Phantom was a Scooby Doo Villain in ONE EPISODE, but that was all it took to leave a lifelong impression on me. I’ve wanted to be him for Halloween for so long and I’ve had his mask at the top of my closet for 4 years now. He scared me the same way as Gene Simmons did when I was a kid, but as I grew up I realized he was just a knockoff of Gene, or more accurately a mixture of Gene’s makeup style and hints of Ace Frehley’s costume (hell, they even lifted his nickname ACE Decade.) I made up my mind and I knew it was high time that I finally embodied the Disc Demon for a night.

Miss Sexy Armpit decided she wanted to be Frankie Stein, my favorite Monster High doll this year. A couple of years back she was Draculaura which came out awesome, but I’m biased toward Frankie though. She did a great job with her costume and makeup as always. So, we were locked in with our costume decisions. It was just a matter of completing our costumes and then figuring out where we would actually go. It’s one thing to have kickass costumes, but if no plans are made, then we’d just be taking selfies in the bathroom at home all night and eating guacamole and passing out on the couch.

I made the executive decision to head off to Trenton, NJ for the Monster’s Ball.

The early evening on Saturday began pretty typically for me. And by that, I mean disastrous. With me, you know nothing’s ever easy, so realizing that I bought the “standard size” blue spandex suit was quite a debacle. Seemed like the right choice, but NOPE. What a dumbass! This thing couldn’t have been more constricting if I had Damien the snake wrapped around my entire body. It’s only for guys from 5’4″ – 5’10” and 120-165 lbs. I’m 6 ft and about 190 some odd lbs. I was a bit uncomfortable, but I toughed it out in the name of Halloween. 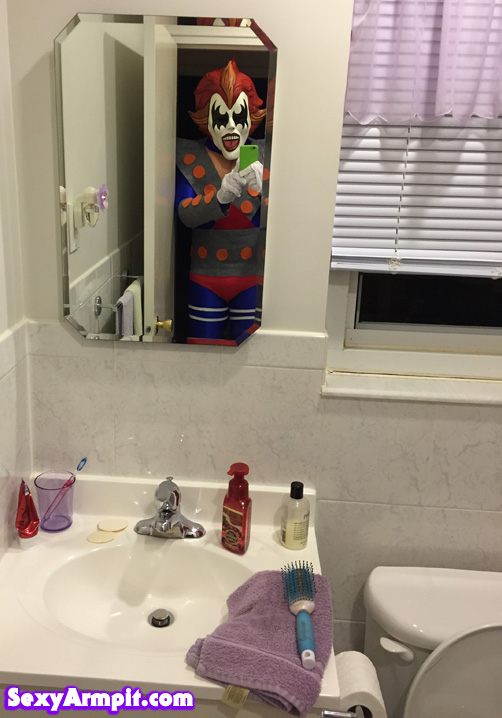 Once I got myself situated, we took some pictures. After all, the photos are the only way to commemorate these occasions. Apologies to Mike and Lauren who were waiting for us outside for like half an hour unbeknownst to me as I took creepy bathroom selfies at my friends house. Mike was the Red Hood and his wife Lauren was Jean Grey/Phoenix. Finally, we piled into Mike’s (@IdiotatPlay) car and headed to Trenton. Lots of cars whizzed by and stared at me as if I looked out of the ordinary or something.

Literally as soon as I walked in the door to check in, one guy was like “Whoa the Disc Demon, right?!! So cool man!” I couldn’t believe I was recognized so quickly as such an obscure character, but it started the party with a positive vibe. 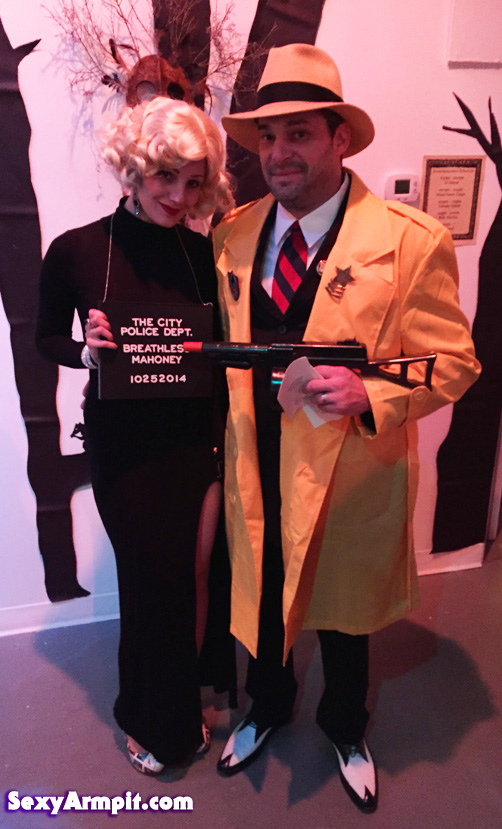 Once inside, Miss Sexy Armpit immediately grabbed me to point out the costumes of a couple in front of us. Our first choice this year was going to be Dick Tracy and Breathless Mahoney, and boy am I glad we opted against it because this couple looked fantastic as them. They knocked it out of the park.

The entire Artworks building was decked out for Halloween with all kinds of homemade creepy decorations enhancing the atmosphere as well as pieces of art based off horror movies and Halloween. We met up with our good friend Bob Burke who created that kickass glowing Halloween 3 print I got at the Punk Rock Flea market not too long ago. One of his pieces of art was on display here as well and it’s one of my favorites of his, here I am in the pic below posing with it.

Take a look at some of the other cool art on display at this party: 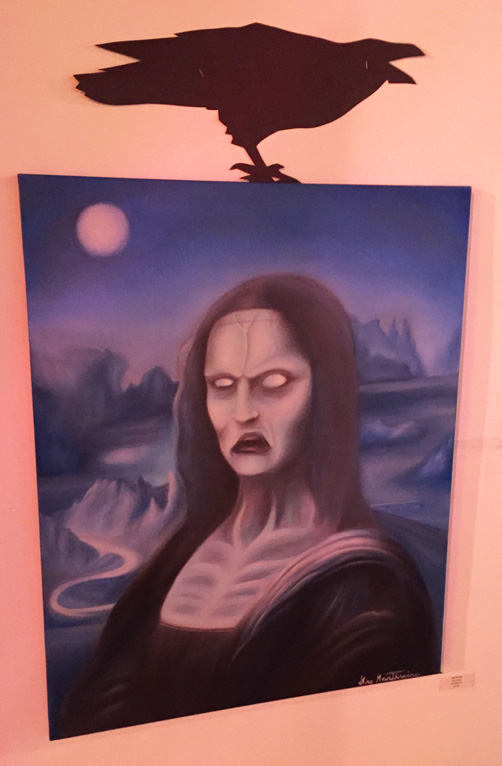 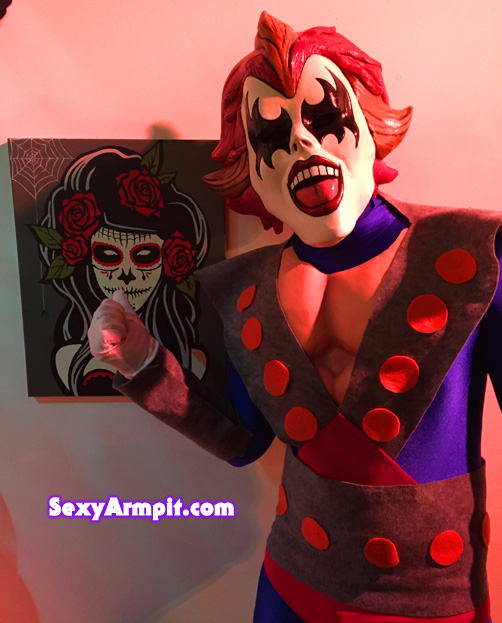 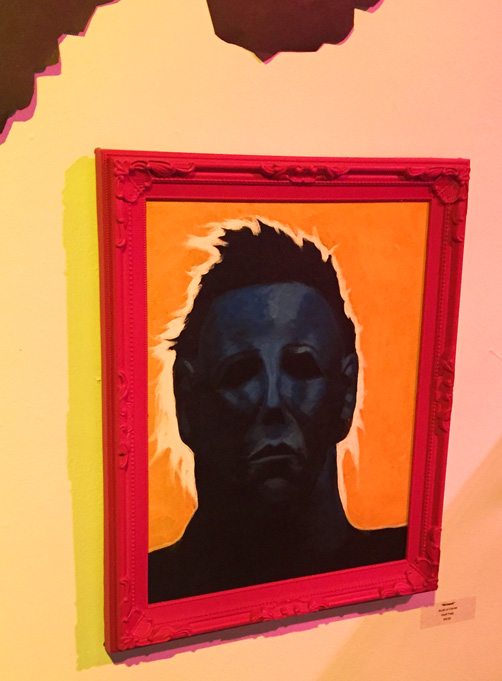 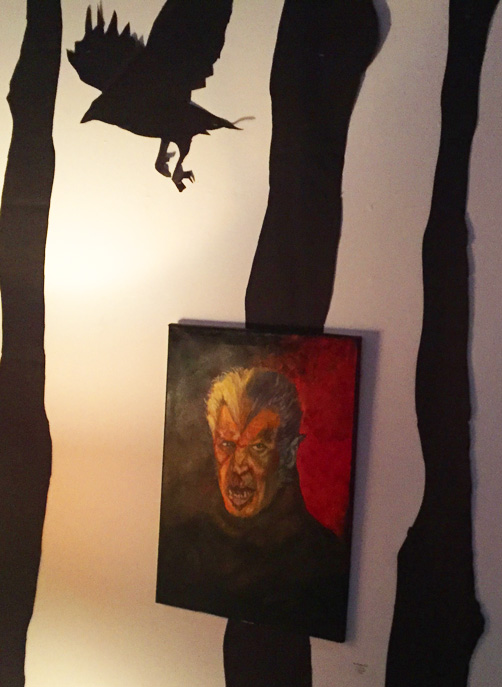 Not to sound purposely vague, but there were several rooms with different things going on. One room had activities like a photo booth and some kind of other situation that I have absolutely no recollection of. I’m hoping to continue being less descriptive about the random activities going on. All I remember is Bob and I bringing up Step Brothers and how much space there was for activities. Always. Any time someone merely says the word activities that’s what comes up, it’s a prerequisite. Another activity was EATING. Here’s the room with the hors d’oe uvres, NOTE the cheese balls! My kind of f’n party! 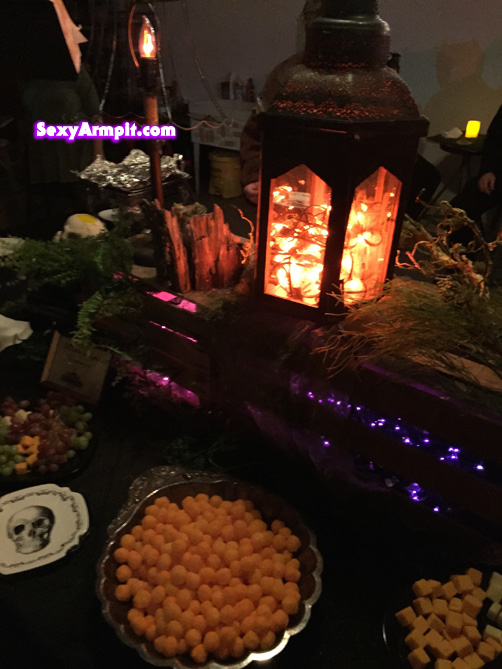 One thing I remember for sure was the room with all the drinks had horror films and spooky animated shorts showing being projected on a screen. There were also some cool blacklit glowing trees. I tried putting one in Mike’s trunk but it was way too big. I tried to avoid the blatant sexual innuendo in that sentence, but there was just no other way to describe that. Ultimately I wanted to tie it to the top of his car like Aunt Edna, but they all talked me out of it considering how I was dressed. The cops would’ve loved that. “License and registration sir, wait, is that a glowing tree tied to your roof? And a Disc Demon in the back seat? I’m calling in some backup…” In New Jersey that’s ground for incarceration. Ok, so I didn’t try stealing the glow tree, but I did have to drink my beer through a straw. I stuck it in the mouth hole. Boom, there’s another one for ya.

Once the party was in full swing, I got that feeling. That type of feeling that I used to get at the high school Halloween masquerade party. Those were the best. I looked forward to them each year. Sophomore year I won runner up, while junior and senior year I won scariest costume. All 3 years I dressed up as Gene Simmmons from KISS. What really put it over though was that I was completely in character. I’d go up to a circle of people whether I was friends with them or not and I’d stare at them and very slowly and subtly started drooling blood out of my mouth. I would go to these parties with literally 200 blood capsules. The best part was that even though everyone knew I was the resident KISS fan, one of the only ones in the school mind you, people were scared and they weren’t sure if it was me or someone that was planted at the party as some sort of creepy entertainment.

Back to the Artworks party. The DJ was pumping Halloween tunes like “Nightmare on My Street,” and it was my kind of crowd and vibe. Everyone was having a good time and they weren’t getting out of hand, which was good because I didn’t feel like kicking some ass in a spandex body suit and 35 lbs of felt. Then, without any warning, a troupe of belly dancers joined together in the middle of the dance floor and began their exotic gyrations. That’s when everyone knew the shit was on. It was like a mango sorbet aged about 60 years to cleanse the palate of all those cheese balls. 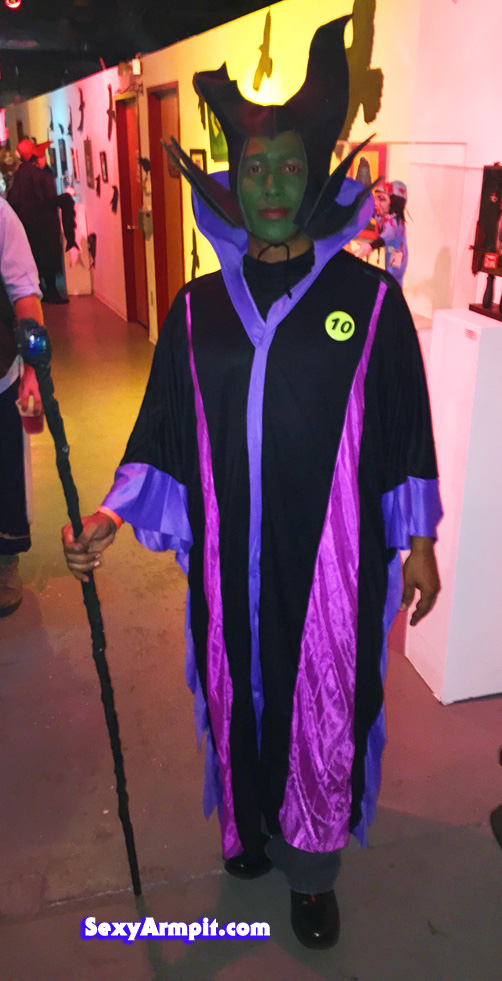 It was about 10:30 which signalled the costume contest. There were some cool costumes I scoped out throughout the night including a dude Maleficent who I referred to as MALEficent. Each entrant to the contest went up on a little stage and showed off for the judges. For some reason I was at the front of the line with Miss Sexy Armpit, but I was asked to go to the back of the line for some reason. I thought I was in trouble, or I was just too damn tall in these 6 inch boots.

When they were ready to announce the winners I had absolutely no clue who would win, but my theory was that it would be the girl who dressed as the Queen of Hearts from Alice in Wonderland. She seemed like a safe bet. They gave out prizes to one or two runners up, and I wasn’t even paying attention then I heard the woman announcer yell “there’s only ONE Diabolical Disc Demon…” I couldn’t believe it. I never go with what will be popular in terms of costume choice, I go with what inspires me, and this time it really impressed the judges! The last time I’d won a costume contest was when we got 3rd runner up for our Macho Man and Elizabeth costumes at a masquerade about 5 years ago. This time I won First place and took home $100 bucks. Not too shabby. I probably spent nearly double that on putting together te costume though, but I’m not complaining! 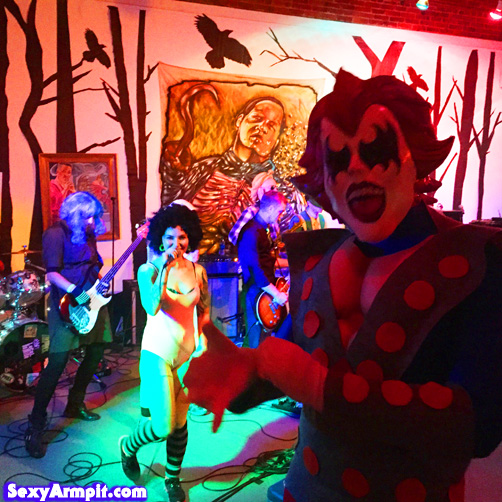 After the contest was over, the energetic band with the tiny frontwoman wearing the aerobics costume, Molly Rhythm, started their set. After checking them out for a bit, we capped things off appropriately, the way most late nights in New Jersey end…at the diner.

Now…to do it all again on Halloween!

What a coincidence! This vintage Bon Jovi New Jersey T-shirt from 1988 is going for a whopping $150 bucks on eBay and an average ticket for Bon Jovi’s string of upcoming shows at the New Meadowlands Arena in May just so happens to be the same price! What a RIP! Of course, that’s not as bad as some of the other Jovi shirts I have seen on various sites which are going for upwards of $300 dollars! You are f-cking out of your mind if you pay that kind of money for a ratty, old t-shirt that’s more than 20 years old! I’d rather go experience an overpriced concert while simultaneously bypassing the $35 dollar beer/hot dog combo meal than buy a ridiculously priced, USED t-shirt.

On the front of this shirt the band continues the Italian “mobster” stereotype that’s associated with New Jersey. Although, the guy on this shirt looks a lot like Lips Manlis from Dick Tracy.

And what’s with the back of this shirt? Who the hell did Jovi think they were back then, DOKKEN? This “They’re Back!” business belongs on the back of an Alice Cooper or W.A.S.P t-shirt, NOT family friendly heartthrobs Bon Jovi! I’m getting scared just reading the back of this shirt, it’s scarier than David Bryan’s horrific hair.