[youtube http://www.youtube.com/watch?v=ir1KkVjHOIY?rel=0]
Motley Crue “Wild Side” at PNC 2008 footage by The Sexy Armpit

Tonight the concert tour that many of us rock fans dreamed about since we were kids is stopping at the PNC Bank Arts Center in Holmdel, NJ. Motley Crue, Poison, and The New York Dolls will rock the amphitheater tonight in what’s sure to be a kickass show. The parking situation at PNC is terrible but it’s a hell of a night and it’s a great venue for a show once you get inside. The Sexy Armpit will see you there if you are going!

This tour marks Poison’s 25th anniversary tour which they are billing as “Glam-a-Geddon 2011,” and there are rumors that this may be their last tour, at least for a while. They’ve been touring almost non stop since the early 2000’s. Motley Crue is said to have a new CD on the way and aside from Mick’s health issues, they show no signs of slowing down. With their new lineup, The New York Dolls are promoting their most recent album Dancing Backward in High Heels.

Now for some Poison footage Sexy Armpit style with “Talk Dirty To Me” from 2008:
[youtube http://www.youtube.com/watch?v=wvgD-SYCKKw?rel=0]
www.SexyArmpit.com 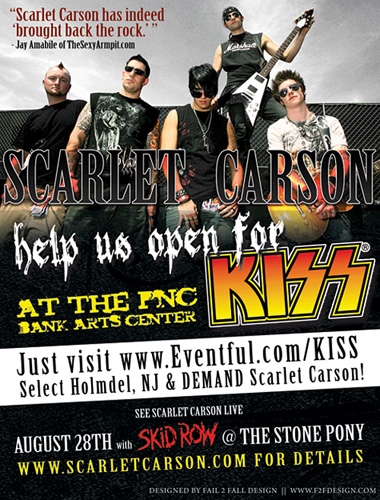 Yesterday I spotlighted New York City’s The Dirty Pearls, and today it’s New Jersey’s own Scarlet Carson.  The Dirty Jersey Rock and Rollers were ready to open for KISS, as were The Dirty Pearls, but since Eventful’s contest is clearly predetermined it doesn’t look like that will be happening, even though both bands deserve the shot. The bands at the top of the contest rankings literally came out of nowhere and have double the votes than the other top bands. Most of my friends and concert freaks that I know have never heard of the bands that have taken over the lead for the opening slot at the KISS show on 8/20/10 at PNC Bank Arts Center in Holmdel, NJ.

Scarlet Carson have an ad out in the local music newspaper The Aquarian to help rally some new votes, and in the top left I was stoked to discover that they quoted from The Sexy Armpit’s review of their latest album! To a guy who has been writing since he knew how to hold a pencil, that is quite a high honor and I greatly appreciate them doing that. I remember when Matt from X-E wrote about how his quote was used on The Ghoulies DVD, and I just thought that had to be the coolest thing in the world and indeed it is!

For one of the best rock shows you will see, you MUST check out Scarlet Carson if you are in the area. The Stone Pony will be welcoming Scarlet Carson opening for Skid Row on Saturday August 28th, 2010. Once again, a big thanks to Scarlet Carson for quoting The Sexy Armpit!

Here they are performing “Not So Innocent”
at 2009’s Bamboozle Festival at The Meadowlands
www.SexyArmpit.com