An instant holiday classic, The Neighbors episode “Merry Crap-Mas,” originally aired on December 5th, 2012. Let’s take a look at some of the best stuff from this yuletide episode.

Contained in this episode is the best Christmas morning scene in television history. You may not believe me right now, but by the end of the post I’ll make a believer out of you.

DEBBIE WEAVER:
“Christmas is about family and smiles and the joy of being together, the gifts are just one tiny part of it.”
LARRY BIRD:
“Oh yes, and there’s that fat slovenly burglar you call Santa Claus. Honestly, put on an apron for God’s sake fatso!”

Abby, instructing her parents on her letter to Santa:
“You should probably fax it, it’s getting pretty late.”

“Can you remind me again why we want to be alone on an island with these children?” – Marty Weaver

“God what the hell? Is this the constitution? Who makes amendments to a Christmas list?” – Debbie Weaver

Throwing a wrench into their new plan are The Bird-Kersees. At first, they just gazed at the tower of Christmas presents that were “hidden” in the middle of their house. It was mere moments before they tried to guess what was in all the wrapped boxes. Curiosity got the best of Larry and he started poking and ripping at one of the presents. Larry was overcome with the exhilaration of unwrapping a gift since he’s never done it before. Once he started ripping one open, the whole family joined in and triumphantly started tearing open ALL the gifts without realizing the consequences.

Larry’s sentiments of Christmas went into full reversal. Suddenly his feelings were incredibly positive as if he was Scrooge after encountering all the Christmas Ghosts.

LARRY BIRD:
(about little Abby) “…her teeth keep falling out of her face. What’s gonna fall off next? Her nose?”
DICK BUTKUS:
“Oh Father, I love when you make fun of children!”

The Weaver’s dilemma now is that they can’t return the gifts because the neighbors and all the other aliens in their community are playing with the gifts that the Bird-Kersees tore open with glee. They are inadvertently destroying them, doing insane things like tossing a brand new iPad around like its a Frisbee!

JACKIE JOYNER-KERSEE:
“So, we really screwed your pooch on this one.”
DEBBIE WEAVER:
“Oh Jackie, not only did you screw my pooch but you didn’t call her the next day either.”
LARRY BIRD:
“I admit it, I was wrong about Christmas. It’s a lovely holiday. The things, the trees, the snow…the things.”
DICK BUTKUS:
“Christmas is magical father, magical!”

Larry reveals his adoration for The Muppets:
“Tell you what, let’s watch The Muppets a Christmas Carol again – The Muppets, I like. I can really get down with The Muppets…” followed by his Kermit impression.

*Heard in the episode is Kermit the Frog singing “Have Yourself a Merry Little Christmas.”

“I have never been so wrong about anything in my life, I love Christmas.” – Larry Bird

“I’m totally joyous, I have sugar plums in my head…” – Larry Bird

Larry has a change of heart and realizes that The Weavers have been good to him and his family so he sets out to right his wrong and save their Christmas.

Larry enlists his son Dick and their mission to rectify the situation is engaged. This entire sequence is so completely haywire and I’m in love with every second of it. Larry and son slow-mo walk to the tune of “Christmas in Hollis.” With this kind of build-up you know shit is about to get real. First stop, Larry takes his son Dick to the strip club…to get some girls to play a role in his master plan. Then they buy some pigs and ride home on their golf cart adorned with a Christmas tree and strippers.

Dumbfounded, the Weavers woke up to see this on Christmas morning:

What a scene it was! Larry Bird went all out to make this day special as indicated by the giant Christmas tree he stole from a car dealership, a Tiki statue, Hula dancers, a Polynesian fire dancer and bongo players, some farm animals, Christmas carolers, and Dick Butkus (remember, the whole family is named after famous American sports icons) as Tiny Tim who even delivers the classic line “God Bless Us Everyone.”

After the initial shock of the visual that the Weavers woke up to, Larry Bird waltzes in dressed as the jolly old elf who he was wise cracking about earlier. I think they had all bases covered here. Larry recreated his neighbors would-be Hawaiian vacation and then some. I’d say he more than made up for what he and his family did.

In one of the funniest scenes, Larry opens a yet unopened package to find an Etch-a-Sketch which he mistakes for “the new iPad.” He asks the famous drawing toy, “Siri, did I really ruin their Christmas?” Siri does not respond. Later, after trying to speak to Siri again and growing frustrated, Larry claims that he’s “gonna go Kindle.”

One of the themes of Thanksgiving is sharing your leafed-out dining room table full of intricately prepared foods and adorned with crafty centerpieces the kids made at school with all of your family and friends, and the occasional drunk uncle or nomadic cousin who tends to show up randomly, but only if it’s a leap year. I’m not much of a cook, so this year I’m serving up some nerdery as a gesture of thanks to a show that’s been cancelled by ABC, The Neighbors. Unfortunately, if that nomadic cousin does stop by, the chair you usually leave open for him will be occupied this year, so he’s S.O.L.

It’s only been a few months since it’s cancellation was announced, but The Neighbors deserves much more reverence than it received initially. I’ve been meaning to come up with a way to properly memorialize this wonderful show, one of my favorites of the past few years, and I’ve finally figured it out.

This post marks the first installment of a recurring column dedicated to random episodes where I’ll point out some of my favorite stuff from each episode. This could include favorite quotes, gags, jokes, scenes, and basically anything I found amusing.

And now a very brief explanation on why I was inspired to start this column. The sharp writing and likable cast on The Neighbors had a lot to do with how I got so wrapped up in it. After the first couple of episodes aired, I wasn’t hooked, but that’s so typical of me. It wasn’t until I continued watching my buildup of DVR’d episodes that I really got where they were going with it. The creator and writer, Dan Fogelman, is a Jersey guy and he’s damn proud of it, hence the alien neighbors in New Jersey plotline. What’s not to like? Originally I thought that this theme had been done before, but this show is influenced by tropes from all kinds of classic shows with a nice hefty dose of sarcasm and relevant pop culture references that impressed the hell out of me.
Would I have been as in love with this show if it weren’t for the New Jersey setting? I can’t say the Jersey aspect makes a huge impact on the show, save for a few license plates and mall mentions, and it’s not like the kids from Jersey Shore live next door, they’re actual aliens. What really makes a huge impression is the cast whose chemistry is a dream come true for the production. The casting director has to be commended. It sounds preposterous, but all the main cast members make me laugh. No exaggeration, Jami Gertz is brilliant in this role and she’s never been properly complimented for her versatility. Plus, she’s still a hottie. I had such a crush on her when I was a kid. F*ckin’ STAR!
There’s a lot more I could say about the show, but this is supposed to be a recurring column, so I won’t blow my load of commentary prematurely.
The Weavers upgrade from an apartment in Bayonne, NJ to a town house elsewhere in New Jersey. They come to find out their neighbors are aliens who have inhabited their gated community and taken on human bodies until they can get back to their planet. The alien family, The Bird-Kersees, are all named after famous American sports figures. With that out of the way, HERE WE GO!
Here’s my favorite stuff from EPISODE 8
“THANKSGIVING IS FOR THE BIRD-KERSEES”
Originally aired: November 14th 2012
The Weavers are trying to weasel their way out of having Marty’s parents over for Thanksgiving because they always ridicule him and disparage his wife Debbie for making shitty Turkey. Marty tells his parents that “The oven is broken” and they want to cancel.

After Marty gets offended that his dad is insulting him and calling his new place a “condo,” he feels the need to prove to his parents that he has a nice new town home. Ultimately, he reneges and re-invites them only to find out that Debbie has invited their neighbors, the Bird-Kersees, over as well so they can experience their first Thanksgiving.

This episode solves mystery of the crop circles:

“We live in New Jersey I drive a mini van, I’m built for fine.” – Debbie Weaver (Jami Gertz)
Marty asks his Dad if he’d like to have a tour of the town house and his father looks around and replies, “I just took it, maybe a nice cold beer can take a tour of my mouth” – Marty’s Dad, Dominick is played superbly bitter by Stacy Keach.

“AWESOME, I always wanted to wear genocide!” – Amber Weaver in reply to receiving the nifty homemade Thanksgiving sweater that her grandmother knitted for her

Abby, The Weavers poor daughter astonished and disgusted expression upon seeing the turkey sweater her grandma gave her: 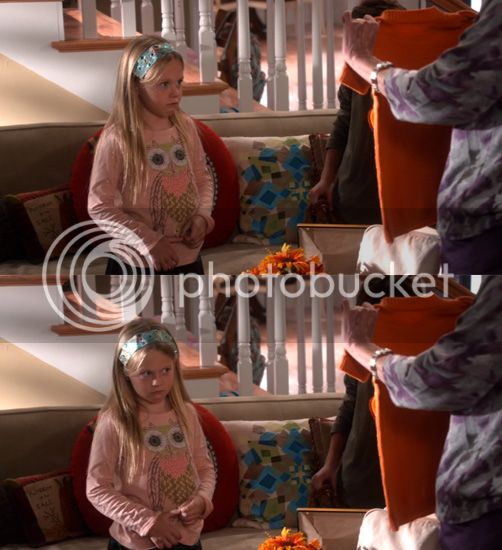 The kids then take kitchen utensils and beat the hell out of the evil sweater: “We have to kill the sweater!”
“She’s in the car pouting and you’re eating Meersh-mal-ow out of a bag.” – Reggie Jackson’s pronouncing Marshmallows in the most awesomely wrong way possible.

“Thanksgiving is HELL. The only good parts are the day before when everything is possible and the day after when everyone goes home. In between it’s just a feast of self loathing and gluttony with a side of shame and all you can do is just hunker down and accept it.” – Debbie Weaver

“Better crack a window Theresa it’s a long way home and that turkey’s going right through me” – Marty’s Dad as he and his wife depart another disastrous Thanksgiving.
www.SexyArmpit.com