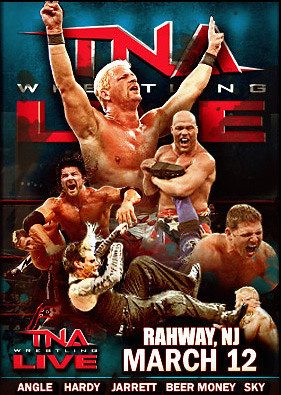 Black Machismo Foil T-Shirt available at shopTNA.com
Since there’s virtually no chance of seeing The Macho Man Randy Savage return to the ring, “Black Machismo” Jay Lethal is even better than the next best thing. Hailing from Elizabeth, New Jersey, Jamar Shipman began wrestling as Jay Lethal in Jersey All Pro Wrestling. Lethal won the JAPW Heavyweight title twice and has also been JAPW Light Heavyweight, Tag Team, and Television champion. Among other companies, Lethal has also appeared in Ring of Honor, and AWA.
Lethal has been doing his Savage shtick for several years now and it’s so faithful that it’s almost eerie at times. Obviously, many people, especially wrestling fans, can imitate the Macho Man, but Lethal literally becomes Savage! If you were there to experience the original wave of Macho Madness back in the day, then you’ll easily get sucked into the latest craze of Black Machismo Madness!
While Jay Lethal’s Macho Man impression might bring him attention, he also thrills inside the ring as well. You can check out Black Machismo on TNA Wrestling which airs on Spike TV on Thursday nights, but perhaps not for very long. Thanks in part to the addition of Hulk Hogan, TNA has positioned itself as a competitor against WWE so you may very well see Jay Lethal on Monday nights instead! Lethal also appears in a small role in 2008’s The Wrestler.
www.SexyArmpit.com