Since I’ve read mainly DC Comics for the majority of my life, indie comics rarely appear on my radar. It’s not intentional, but unless someone shoves one in my face, like my friend, Sexy Armpit Show co-star, and writer at Comic Booked, Mike Wirth (@leafenegg on Twitter), then it will probably pass me by completely. Recently Mike had a feeling that I’d be interested in, Unbearable, the latest offering from Crucial Comics that’s just laced with New Jersey nicety.

Typically, I’ve been reading my comics through the Comixology app, which I get a lot of shit for. It’s similar to how audiophiles felt when people started buying cassettes and CDs and they remained loyal (and snobby) to vinyl. I had no qualms about moving on from the actual physical comic book to having them beamed to my device digitally. I’m fascinated by technology, what can I say? Many of my comic book readin’ friends still worship the actual book. Not sure if they are trying to be hipsters or counter-culture or whatever, but I’ve moved on. This time though, Mike mentioned that I could find Unbearable at Little Shop of Comics in Scotch Plains, NJ. So I went retro.

I’ve been to Little Shop a bunch of times so I stopped there after work one day. The woman working there directed me right to Unbearable which was highlighted by a small sign attesting to the fact that this is a local book by an indie company. While I was there I picked up a couple of other DC issues that caught my eye and went on my merry way.

Picking up a Tiki Bar at The Englishtown Flea Market

Reading Unbearable was definitely not akin to it’s title, although some parts hit close to home (pun intended). The story centers around an aimless, out of work dude named Ben who is living in his girlfriend’s place in New Brunswick, NJ. Ben and his friends chill, play video games, drink beers, and get high, all while he’s NOT looking for employment opportunities – something that royally pisses off his girl Liz.

On a larger scale, whether intentionally or not, writers J.C Luz and Cliff Galbraith bring to life a group of guys who are notoriously “Jersey.” For all the ambitious celebrities and rock stars from New Jersey that I discuss here at The Sexy Armpit, there’s hundreds of unmotivated slackers in this state who talk a lot of shit, but never actually do anything. Kevin Smith wasn’t joking around when he showed us similar characters in Clerks and Mallrats. That wasn’t an exaggeration. It’s not like we’re in the mid-west where a kid with dreams of going to L.A or New York would have to save enough money for a plane ticket before setting out on their quest. We’re merely miles away from the greatest city in the world and we still manage to breed so many slackers. But, that’s not to say we don’t have a high concentration of go-getters, it just makes me wonder why staring at that New York skyline in the distance isn’t igniting even more creative fires. In Luz and Galbraith’s case it wasn’t New York City, but New Brunswick, NJ that set their minds in motion.

There were aspects of the book that reminded me of people who I once knew and some who I still know today. The first issue, while mostly serving as set-up, features our main character in an uncomfortable situation. The dude can’t keep his shit together so I went from rooting for him all the way to thinking “Dude! How could you forget your girlfriend’s BIRTHDAY?” Ben is certainly frustrating, but there’s room for improvement. I doubt he should even entertain trying to win Liz back though, she’s clearly not right for him. 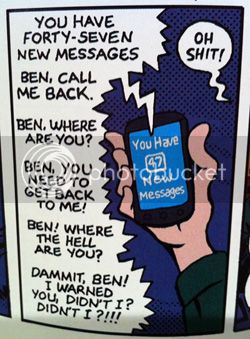 I haven’t read Galbraith’s Rat Bastard, so I can’t compare, but the art in Unbearable shows hints of The Simpsons and even the short lived late ’90s animated sitcom Mission Hill. At the end of this issue Galbraith reveals that Unbearable was originally planned as a possible TV show for UPN, and it certainly has that TV-type quality to it. The art was fun and the book was not hard to follow. My favorite panel is when, in horror, Ben sees that he has 47 messages from Liz on his phone. We’ve all been there.

So, a directionless crew of bros who drink, smoke pot, and play video games sums up about 45% of New Jersey – guys and girls. It’s sad that not much has changed since the early ’90s, but this is precisely why Unbearable works – it’s familiar. A lack of direction has actually simultaneously opened up a world of possibilities for Ben and his friends. I’m looking forward to seeing where it goes from here.

**The New Jersey references were a bonus for me since I obviously love NJ crap. There were references to The Misfits, a knockoff version of The Court Tavern (The Cork Tavern), and the Englishtown Flea Market.

www.SexyArmpit.com
I’m not a big fan of shopping but I’m a sucker for a good comic book store. Growing up, going to a comic book store was one of the main things that I looked forward to. Aside from new comics, you could find boxes of 10 cent comics, random junk, posters, and the newest collectibles. Unfortunately there aren’t many decent comic stores around anymore. I think it has more to do with the personal connection that many of us had with the store owners and employees back then.

I was immersed in comic book collecting from a very young age. It all started with a back issue my sister picked up for me, Batman #349. It was 1985 and she bought it at the store that occupied the future spot of Heroes World in Woodbridge Center, I believe it was called The Paper Tiger. The cover is still etched in my mind and the style of Batman and Robin is still a favorite cover of mine ’til this day. I prefer Bronze Age Batman which is reflected in the ’70s and early ’80s comics books. For a better idea of these you can take a look at this site where you can find comic book covers of all kinds. I began collecting several Batman titles, some Superman, Supergirl, The Outsiders, and The Green Hornet to name a few. It was pretty difficult to find a comic book store before the Batman movie in ’89 created Batmania all over the place. Luckily, I started collecting before the Batman movie was on the horizon. At that time comics were getting more and more popular but they were still bought by a relatively small fan base.

My favorite shop, Comic Relief in Colonia, was where my father would take me every week. They had some really good people working there who would remember me and hold my “pull list” of comics for me back when I didn’t even know what a pull list was. For those that don’t know – they always remembered what titles I collected and which issues I was looking out for. Stores aren’t as personal anymore now that eBay and online shops exist. You don’t even have to go searching anymore, you can type in the issue and order it in a few seconds! Not to sound like an old fogey, but it was more fun back when you actually went to the shop and searched for a specific issue in the back issues boxes. It was a great feeling of excitement when you first walked in and saw all the new issues on display. What wasn’t fun was the point you realized you had a stack of 10 books and you were about to pay close to 40 bucks for them! Occasionally for a change of pace we’d go to Tommy’s Cards and Comics in Metuchen. Tommy, the owner, always acted real cocky and wore odd fishing hats. Not necessarily the kind of guy you want to buy your comics from.

Comic Relief in Colonia and Heroes World closed and I was constantly being jerked back and forth like I was on a bumper car. An avid comic collector such as myself was left without a store to get comics at. Heroes World became my destination for comic, collectibles, and action figures for several years. Later, Comic Attitudes in Menlo Park Mall was close to me and a decent enough replacement for a while. The people working there were kind of snotty and they were also overpriced probably due to Mall overhead. Eventually, out of the several locations of Jim Hanley’s Universe, the most convenient for me was the one in Fords near Vintage Vinyl. I liked Jim Hanley’s a lot more than Comic Attitudes since it catered more to the fanboy, not the mall shopper.

It wasn’t until I was about 13 years old that I discovered what I consider the mecca of comic book stores, Midtown Comics in Manhattan. I had an sensory overload when I realized all of the comics, shirts, toys, and hard to find bootleg videos they had. The only problem was that I only had the time and money to get to Manhattan maybe once a month. I started heading into Manhattan once a month to load up on comics. That was before I even had a license! NJ Transit back and forth. After the demise of Jim Hanley’s in Fords and Comic Attitudes, I started giving Adventure Planet in Edison a try. They had a great selection of books without all the glitz of other places like Comic Attitudes. It reminded me most of Comic Relief. In fact, I believe their store was originally a location of another Comic Relief. They also had a killer selection of used and new toys and figures. I used to sell a lot of my stuff to them.

I began this post basically saying there are no more comic book stores around here. That’s not really accurate, because they are around, they just aren’t the same. Or is it that I’m just older? Or is it that the personal touch and rapport that a frequent comic buyer and a store owner/employee used to have with each other?

We still have hope. I visited Little Shop of Comics in Scotch Plains and it’s a pretty decent little store. They have lots of collectibles and a wide selection of new and indy comics. Thanks to Miss Sexy Armpit, another store I visited about a year ago is actually called The Record Store in Howell. It’s pretty awesome and has a large selection of figures, comics, collectibles, and music. My buddy Rebecca reminded me that there was also Rogue Comics in Cranford, which is also a good stop.  Classic Comics in Rahway is OK, but it feels like they’re watching you when you’re browsing. I hate that. Finally, I can’t leave out Jay and Silent Bob’s Secret Stash which is a fun stop at anytime I’m in Red Bank. If you know of any great comic shops please post/link them. Thanks!