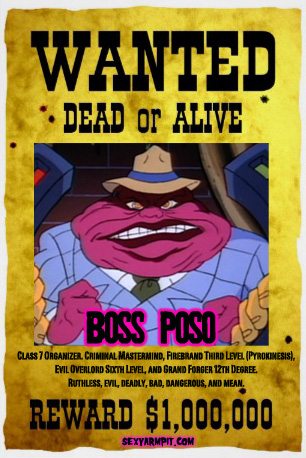 New York and Chicago are home to many of history’s “mainstream” mobsters. The fact is though, the mafia has always been heavily attached to New Jersey culture as well. Even if you weren’t aware of that, The Sopranos helped further cement it (cement shoes style) into public consciousness. More recently, HBO was yet again responsible for directing everyone’s attention to Jersey’s criminal affiliations. This time it was Nucky Thompson, a politician and organized crime boss in Boardwalk Empire which is set in Atlantic City during the prohibition era. Sure, you’ve become familiar with Tony and Nucky, but there was also an animated TV crime lord that you may not remember. His name was Boss Poso. Chances are, if you never crossed the streams and drank your Ecto Cooler every morning like a good little kid, you probably remember this big fat tub of purple ectoplasm.

Growing up in Jersey, I knew of so many people who were said to be “connected.” I can’t imagine that there’s heavy mob activity in North Dakota or Mississippi, so, living here in the Tri-State Area comes with the added bonus of real life exposure to organized crime. It was even in the shows I watched as a kid.

Like a lot of you I was religious about watching The Real Ghostbusters. It was one of my favorite cartoons growing up. Seeing that my state was mentioned frequently throughout the series always amused me. I saw both Ghostbusters films in the theater when they were originally released and I obviously realized that they were filmed and set in New York City, but as a kid, New York City seemed like a totally different world. As I got a little older, I realized that New York City was right through the tunnel, or what we used to call “the straw.” 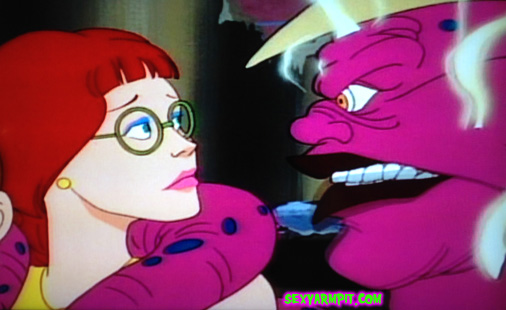 With our close proximity to Manhattan, it was almost a given for New Jersey to get some air time once in a while. Even with all five boroughs for writers to play around with, they still found reasons to send the Ghostbusters over to Jersey. Not much has changed because the Garden State was still the brunt of jokes back in October of 1989 when the episode of Slimer and The Real Ghostbusters “Partners in Slime” first aired.

In the episode, Poso, a Jabba the Hutt inspired ghost, involved in organized crime, wants to become the godfather of all the ghosts and maintain control over them. He figures that the easiest way to go about this is to take over the Ghostbusters operation. To accomplish this, his minions (who resemble 1930s gangsters) pluck Janine and Louis Tully out of a mall (enjoying our minimally lower sales tax while shopping on Janine’s birthday) by trapping them Tower of Terror style in an elevator. Poso then takes them for ransom and won’t let them go until the Ghostbusters fork over their headquarters and their ‘busting equipment to him. 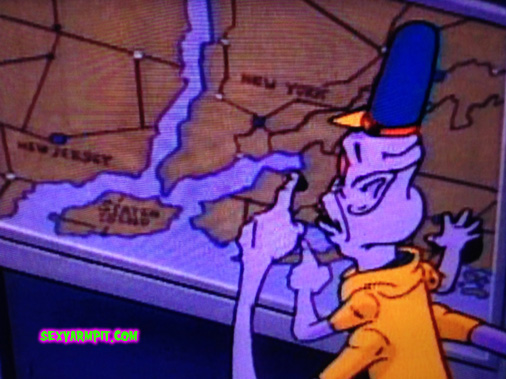 Shifter points out Ghost Town, NJ but his finger is NOWHERE NEAR NEW JERSEY!

Slimer apprises the guys of the situation. The rest of the episode involves the Ghostbusters orchestrating a pretty elaborate plan to rescue Janine and Louis. The guys release a ghost, Shifter, who used to be Poso’s sidekick. He’s instrumental in their *SPOILER* eventual nabbing of Boss Poso, whose lair is located in Ghost Town, NJ. When hearing the term “Ghost Town,” it might bring to mind a desolate town out west or down south with tumbleweeds rolling across the dirt. Nah, it’s in Jersey and on the Ghostbusters Wiki it’s described as “a run down town in New Jersey.” Gee thanks, not another one! These episodes were only 22 minutes long, so for the sake of time, the Ghostbusters only had to make the trek over the Hudson river to Jersey in a spooky little “ferry” similar to the one Charon paddles around in the original Clash of the Titans.

Four other great things about this episode: 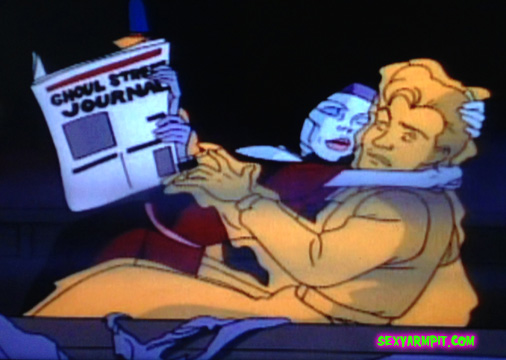 The fact that The Real Ghostbusters wasn’t just a knockoff of the feature film was an element that didn’t bother me. I remember some friends in school not liking the show just because it “wasn’t like the movie.” I doubt the people responsible for the show back then expected 6 year old kids to have such discerning taste. After a really good run of several seasons, the show morphed into Slimer and The Real Ghostbusters. The plots began to feature more of the exploits of Slimer and Janine Melnitz. Each episode became a slightly more goofy and child friendly in nature. Not necessarily worse than previous seasons, just infusing more Slimer. The ghosts weren’t as nightmare inducing, and the major villains weren’t as formidable. But you already know that. Maybe Boss Poso shouldn’t have been lumped in with the likes of Tony Soprano and Nucky Thompson after all!

Cracked.com is a consistently amusing stop on my widespread Internet travels. A while back I noticed they featured a post about New Jersey which I found to be hysterical, for example this line: “A healthy Guido has a skin tone somewhere between “orange” and “magma.” And of course the above chart is superbly asinine. If anyone is wondering where The Sexy Armpit headquarters is, it’s somewhere in the red part – apparently where “The actual Mafia” exists! I can’t really elaborate on that right now though.

Guido jokes aside, I did have a few problems with the post. First, the writer claims to have lived in Jersey for 18 years, but Cracked failed to publish the author’s name on the article. Authors usually like to be cited for their work, in his/her case maybe they thought they’d get the cement shoes for writing jokes about Jersey? If I was the author I wouldn’t have remained anonymous. Jersey jokes are funny, plain and simple, so be proud if you have a few good ones. The article has the requisite mentions of guidos, Sinatra, Bruce Springsteen, and Bon Jovi. It was all fun and games until they dissed My Chemical Romance at the end of the article. BOOO! The author should’ve wrapped it up after burying The Jonas Brothers.