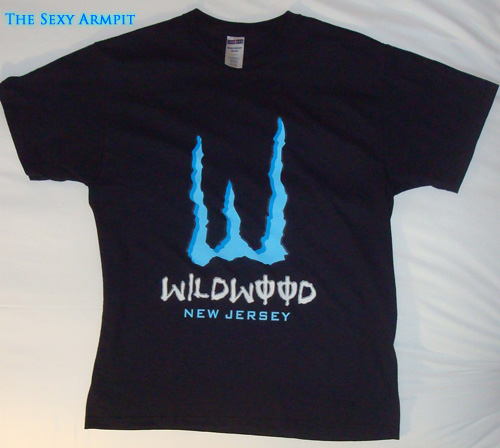 When I take a sip of that bubbly Monster Energy Drink it makes me feel like I’m splashing in the ocean at New Jersey’s premiere, moderately priced resort town, Wildwood. And on the flip side, just the sheer idea of being in Wildwood transforms me into a ferocious energized beast. You know what activates me even more than sipping an energy drink on a sunny summer day at the Jersey Shore? Blatant displays of trademark infringement! Whaddya know? If you turn the clawed out letter “M” on the Monster can upside down, you have a “W,” which stands for Wildwood!

When I’m on the boardwalk and I slip this t-shirt on, it propels me to a ridiculuously high level of primal savagery. Inhaling 7 full paper plates of funnel cake in mere milliseconds is only the tip of the iceberg. Instead of standing aside and just “watching the tram car,” I started huffing and puffing and sprinted right towards it head on. I wasn’t playing a game of chicken with the tramcar either. I actually tackled a moving tramcar at full speed and then swung it around over my head at least 2 or 3 times just because I had so much energy to expel.

I’m telling you, these Monster style Wildwood t-shirts need to come with some kind of surgeon general warning: “PLEASE DO NOT WEAR THIS T-SHIRT IF YOU ARE ALREADY AWESOME AT WRECKING SHIT UP BECAUSE ONCE YOU PUT IT ON YOU WILL BE DOUBLY GOOD AT WRECKING SHIT UP AND THAT’S NOT COOL BECAUSE YOU ARE CLEARLY ALREADY RECKLESS AND YOU WILL BE A DANGER TO THE OTHER FINE CITIZENS ON THE BOARDWALK OR WHEREVER YOU MAY BE, ALSO, THIS T-SHIRT WILL NOT PROTECT YOU FROM ANY SEXUALLY TRANSMITTED DISEASES, OH, AND DO NOT WEAR IF YOU ARE PREGNANT.”

Allyson from Bring Back Glam pointed this video out in one of her recent posts about “Heavy Metal Pitchmen.” Did you know that Paul Stanley of KISS sang a Folgers Coffee jingle? He sings the hell out of that shit! Listen:

I went for a long walk downtown on Saturday night. It was a pretty nice night out considering how hot it was in the daytime. I figured I’d walk to the Quick Check to see if they had the new Monster Energy Coffee drink that I wanted to try. I began my trip with a glance at the New York City skyline. Far in the distance it glows like a majestic Oz. New York is no Oz, and neither is where I‘m about to go. As I walked down Main Street I thought about how I used to want to move out to California and live in San Diego. In fact, it didn’t seem like an option, I was set on moving once I finished college. Some of my friends always said they wanted to pack up and just move the hell out of here. I never thought of moving away to a different state as an escape, I felt there would be more job opportunities there. I never felt like I needed to “get out of this damn town.” I believed that it was pretty lame to stay in the same place my whole life. I never wanted to be “that guy.” You know, the middle aged guy who works jobs around town gathering shopping carts at the store and cutting grass all while reminiscing with the people in town about the old days. That same guy could tell you every one of his teachers names from High School and the score to every football game he played in. Or possibly a more realistic scenario, he wears a Metallica T-shirt and can tell you the in-s and outs of his Pontiac Firebird that he bought junior year of high school that he still drives. Thankfully, I’m not them but it is scary to think that it’s possible to become that way. Is it because they get trapped in their hometown forever? I don’t think so because I know many people who have strong familial ties to the town and the surrounding towns. My family isn’t from this town, in fact they’ve collectively lived in so many different towns that I can’t keep track. I thought about how time passed and that money and a realistic career kept me from ever moving so far away. I don’t feel that making the decision to not move away has made me any worse off though.

As I made my way under the route 9 overpass I noticed how much garbage decorated the dirt sidewalk. I thought “Why do we even have stretches of dirt sidewalk in a town with 100,000 people in it?” I quickly forgot about the garbage on the ground. Some low hanging tree branches presented my face with the always annoying spider web, and another, and even one more a few hundred feet further to get me pissed just enough. With the spider webs and the humidity I feel like I need to take 17 showers at this point.

I think I live in the only town that has convenience stores every 300 feet. 7-11didn’t have the drink I wanted so I moved along. The stores and restaraunts were closed and it seemed like a ghost town except for the cars. I looked into the windows of some of the places in the center of town and wondered “How do some of these places stay in business?” I rarely see anyone ever going into some of them. Next stop was Quick Check and again, no luck with the Monster coffee. I kept walking and noticed two Latina ladies passing me on the left. One of the girls said quietly “Hiii Papi” in a friendly fashion. I was surprised because I don’t think anyone has ever said that to me and inside, I was laughing. I walked about 200 feet away this time and stopped into, YES, ANOTHER QUICK CHECK! No luck again. I’m not kidding here people, there ARE that many convenience stores in our area. Watch the tram car please, Next Stop: Walgreen’s open til’ midnight! No Monster Coffee beverage. Bummer.

My journey was unsuccessful and it was time to make my way back home. I walked back down Main Street as a tall guy passed me on the right. He nodded his head and said “What’s up?” in a pretty upbeat manner. I said “what’s up” back and kept on my way. Shitty me was about to ignore him. It was an oddly good feeling to have people say hello to me at 11:30 at night when the streets are pretty empty. The idea I have when walking the streets aimlessly at night (or at any time or place for that matter) is that this person is going to mug me so please walk past me as quickly as possible. Does their friendliness make me feel like things are “getting better in the world?” Not really judging by the garbage all over the ground and that there are psychos that decide to shoot people like at Virginia Tech. Life isn’t so peachy keen, but for that hour and a half that I was walking the streets on a cool but humid night, I felt like things were good and it was my town. I felt like throwing a party in the middle of main street. This vibe of positivity didn’t end there. Not 2 minutes after the tall guy said what’s up to me the cars in the street stopped for a red light at the intersection. “YO JAY!” I heard a guys voice yell from a car that was waiting at the light. An old friend from high school recognized me and we started talking a bit. He asked if I needed a ride. I definitely looked like I was homeless or something. You can’t walk around late at night in cargo shorts and a Hanes T-shirt anymore and have people NOT think you are homeless. It’s a crime! I told him I was actually intentionally out walking and enjoying the night. He was telling me how he had National Guard duty early the next morning. We ended the conversation and I continued home. It crossed my mind how different it is walking through Times Square than where I just was. There was no hustle and bustle, no horns honking, no nasty odors, but I did have 3 people say hello to me. There were no flashy lights which I do enjoy, but I didn’t have someone hastling me for money or standing on a bucket preaching their good word to me. That’s pretty damn good if you ask me. I was able to take a leisurely stroll with no worries. I’m sure I’d be able to do that in say, San Diego, or Orlando, or anywhere else for that matter, but why? I’m already here. I’ve always been here. And, there’s like 6 convenience stores within walking distance! Let’s face it maybe I was embellishing but I in no way feel like shouting “I love this town!” like Ernie Hudson did in Ghostbusters, but I guess it’s a pretty damn good place.