I had not heard of Baby It’s You until a couple of years ago when I discovered that it was based in Trenton, NJ so I wanted to check it out. Recently, I rented it from Netflix and even though there’s been many occasions where The Sexy Armpit has been known to save a film merely based on its ties to New Jersey, as you will read in this review, even with the added feature of seeing Rosanna Arquette’s boobs for the bazillionth time, Baby It’s You is better left undiscovered.
Baby It’s You, is based on a story by Trenton-born Amy Robinson, and begins in 1966, and progresses into the early ’70s. The soundtrack is classic, but even it can’t incite the plot, if you want to call it that, to miraculously become interesting. Considering the film was made in 1983 and is set in 1966, when I heard the first Springsteen track play it was obvious the filmmakers were taking some creative license. Featuring some of Springsteen’s best songs worked well within the film and it kept with the Jersey theme, but it wasn’t enough to rescue the dismal film out of the depths of the Delaware River.

The flaw of the film is that the two main characters are unlikeable. Our main character, Jill, played by Rosanna Arquette, gets courted by a more suave version of a greaser who calls himself Sheik. Sheik (Vincent Spano) dresses to the nines to make up for the fact that he’s pretty much a loser and has daddy issues. For some outrageous reason, he thinks that he’s going to be a singer someday and make something of himself. Shiek’s mom is very sweet and encouraging while his father is tough on him. I didn’t feel bad for Sheik’s home life at all, nor did I have any sympathy for Jill’s situation. Jill seemed to have a perfect situation, she was an above average student who lived with 2 caring parents in a nice house. She aspired to be an actress and she succeeded in high school and college, but not without Sheik proving to be a distraction in her pursuit.

Get this, Sheik’s aspirations were not to be an actor like Jill, but to be a singer like Frank Sinatra. Now, if he could only actually SING then he’d be headed in the right direction! This guy looked like he would be a crooning version of Tony Manero. His dream is to do a night club show where he lip syncs to songs from Sinatra, Dean Martin, Paul Anka, and others. What kind of a lousy dream is it to lipsync to songs played from a stereo at a night club half filled with old drunk people? The dude winds up working at a club in Florida lip syncing along with songs, not even doing Karaoke. Karaoke singers seem like Pavarotti compared to this guy. If you’re halfway decent at the video game Rock Band then you already have more talent than Sheik! With all his expensive suits helping to play up his image, Sheik was clearly trying to find an identity. Sheik was overcompensating for the fact that he didn’t really have any talent, but knew that he wanted to be a famous singer. It was hard to relate to this character, since it’s easy to realize when you just aren’t cut out for something.
His advances toward Jill were just plain creepy. They didn’t even know each other and he just plopped himself down at her lunch table one day, came on strong, and then wondered why she wasn’t receptive to him. Eventually, Jill falls for this metrosexual bad boy. She agrees to let him take her out. Sheik brings her to a dive bar and ignores her to hang with his friends at a completely different table for the entire night. What a douche! Oh yeah, was there a time when you were allowed to drive on the boardwalk? Or was this another way for him to demonstrate what a badass he is? Shiek was basically the film’s answer to late ’60s guido. Maybe guidos have a license to drive on the boardwalk?

“The way I figure it, there’s only 3 people in the world that matter.
Jesus Christ, Frank Sinatra, and Me.”
– Albert “Sheik” Capadilupo (It’s must be the late ’60s version of GTL)
Sheik had a bad temper. Spano played him like a completely unhinged slimeball, especially when Sheik informs Jill that he got kicked off the basketball team. She tries to get away from him and tells him to leave her alone “Whattya think you’re too f-cking good for me?” he says before launching her school books down the hallway. He throws a fit and hits the locker like an immature little bitch. What’s with this guy? Was this how Jersey Shore would have been in 1966? In a later scene, while looking for Jill, he trashed her dorm room before she returned. After she walks in to see him, Arquette barely shows any feeling of shock that he has just completely trashed her place. “…my stuff” she says in a docile tone. Yeah. That’s what I’d say if I came home to find that my shit was thrown around the room and the place had been totally ransacked. “…my stuff.” 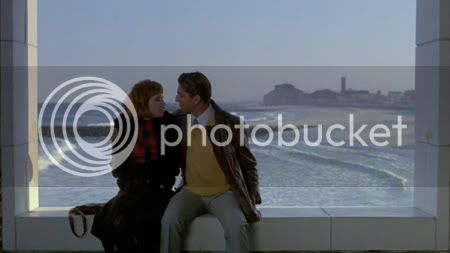 As you can see, Jill is just plain stupid. Sheik and his pal actually wind up kidnapping Jill and her friend. He grabs them, tosses them in the car, puts a gun to them, and speeds away. Maybe I wasn’t interpreting this scene and the ones that followed correctly, but it seemed like a truly dumbass move for Jill to forgive him after what he did. If I put myself into Jill’s character, I just can’t relate to her, but you can bet your ass that I would NOT continue dating someone who kidnapped me at gunpoint. Crazy bitch!  Is this entire movie just about Jill’s infatuation with “the wrong guy?” How pathetic. At one point, Sheik even bangs one of her best friends!
The theme of the film seems to be “I’ll love you no matter how fucked in the head you are.” With all the emotions that were desperately pleading to be relayed to the viewers, they never come across. It’s a shame because the movie intends to mirror the frustration, confusion, and chaos that makes up a teenagers transition into adulthood. It’s a downer and it fails to convey these feelings because of our lack of sympahty for the two main characters. Their lives aren’t that bad, in fact, they are pretty damn good. After watching the film, the characters seemed like 2 spoiled brats who are bored with their suburban upbringing. They are basically normal teens who are going through the same crap that everyone else goes through. Baby It’s You isn’t sure what it wants to be, but what it does agree on being is a f-cked up love story with some damn good shots of Asbury Park.