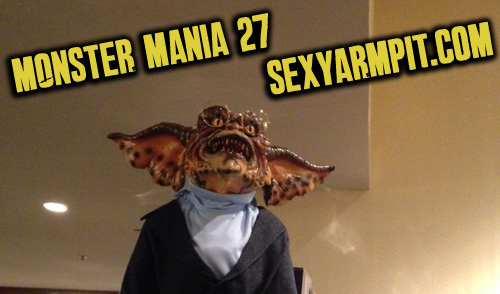 Freddy Krueger was in town over the weekend. The mere thought of this may have struck an incredible amount of fear into you back in the mid ’80s, but nowadays it’s not as scary as it is cool. At some point in the future, we’ll look back and marvel at how monumental of a thing this was. FREDDY F’N KRUEGER himself meets and greets his fans, quite often I might add, in New Jersey of all places. This is the type of thing that happens all the time at the Cherry Hill chapter of Monster Mania.

Negating all that build-up, I wasn’t actually there to meet Robert Englund. Nope, my mission for Monster Mania 27 was merely to cruise around the dealer rooms and hang out with friends. While not as monumental as the 26th Monster Mania, #27 did have its charms. 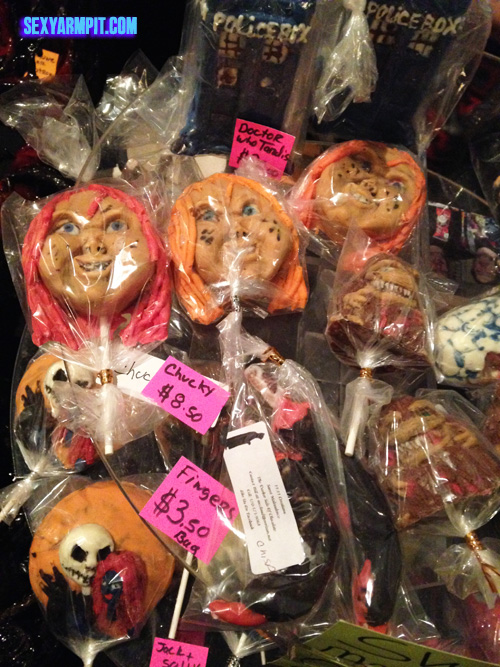 As we stared down several stories to the ground floor from our newly renovated room at Crown Plaza in Cherry Hill, we gazed at the Englund line. His drawing power is tremendous every time. The line to meet him is usually wrapped at least halfway around Crowne Plaza.

When I see the Englund line, I wonder to myself, are these all people who have met him before and want to meet him again, or is this line sprinkled with a whole new generation of fans? I imagine it’s a bit of both which is a really cool thing. The crowd is usually very diverse. It’s not just a bunch of middle aged people going to meet equally as old if not older celebrity guests. Appropriately, there’s constantly new blood. I witnessed it first hand when a young kid/horror fan who couldn’t have been more than 12, ran up to John “Freddy in Space” Squires and his wife Jen to say hello. It was one of those cool moments that reinforced the fact that the horror community is tight knit and comes out in full force to local horror cons such as this. 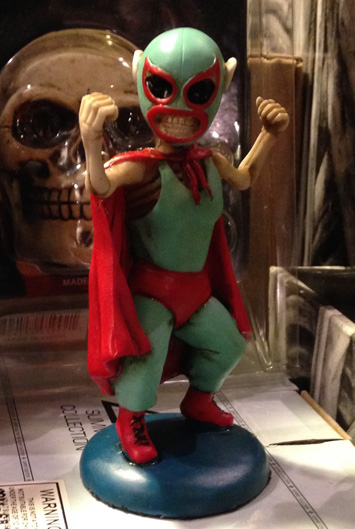 One of the cool things about the March installment of Monster Mania is that it usually falls near my birthday on the calendar. That was pretty awesome for a long time, but with each passing year the novelty has began to wear off. Any time I’m at Monster Mania I feel like there aren’t many other places I’d rather be…probably only Disney World. It must be that all the nostalgia makes me feel like a kid again. I feel very at home and at ease at the cons because they’re a chance to tune out the world and get transported to an alternate reality. I love being able to talk to people with the same interests as me as well as doing some horror-themed shopping. 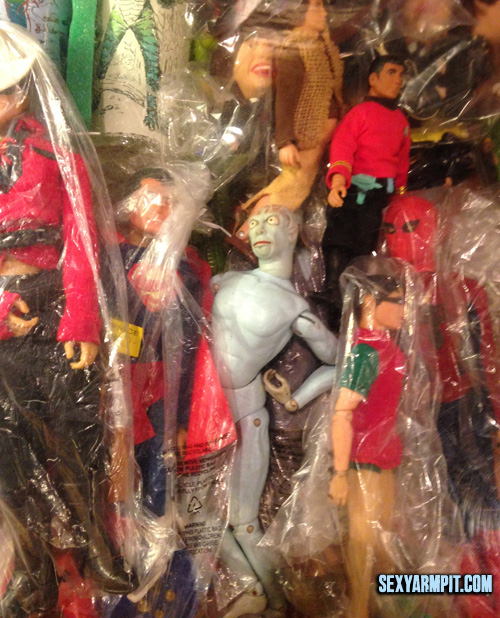 Something in my mind tells me that I’ll get more out of the experience if I don’t go to a con merely just to buy stuff. Is it a fuller experience if I meet some of the celebrity guests as well as shop for stuff on my macabre mental checklist? This time around I was a clean slate. I was going for no other reason than just to be there and enjoy the experience. Usually, that’s the precise time when the coolest stuff pops out at me. Plus, it’s more fun to be taken off guard by an item you didn’t even realize you wanted.

Once we arrived we wasted no time swinging through all the dealer rooms a few times. This is the first time that I don’t think I bought anything except food and drinks. I’m proud of myself. I didn’t even buy a t-shirt, but that’s because I have..all of them. Matt found a few toys that he discussed in his Monster Mania post and later he surprised me with an insanely awesome Slimer night light! Thanks Matt! See a picture of it at my Instagram (instagram.com/sexyarmpit.) 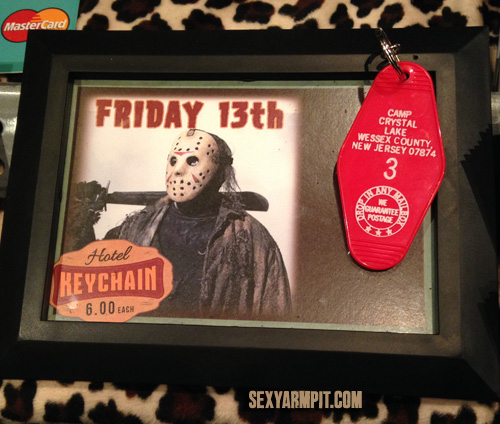 We purposely thought it best not to intentionally try to recapture the over the top nature of the August installment of Monster Mania, so we just hung out for the rest of the night and had a few drinks. The kitchen at the hotel bar was backed up. This wait resulted in John, Matt, and myself debating about our favorite Nightmare on Elm Street and Friday the 13th films. I feel like we talk about this same topic each time we are in each others presence, but it always seems like we accomplish something in the conversation. Sometimes I get looked at like an elitist film snob for my taste in NMOES movies. As a kid I swore Dream Warriors was my favorite, and it may be one of my favorites, but ultimately, the original is without a doubt my favorite and it’s the installment I can watch anytime without having to be in the mood for it. As far Friday the 13th goes, I’m pretty sure we all agreed (but I’m only officially quoting myself) that 1984’s Friday the 13th: The Final Chapter is our favorite of the F13th series.

After we finally ate and had a few beers we ran into Tom Bryce from Shit Movie Fest – a guy who I swear I’ve most likely brushed shoulders with at previous Monster Manias but didn’t realize it. It was great to meet him since he’s one of the nicest dudes from our online world. I also saw our friend Jess Rajs from Gorgeous and Gory and a few other horror-fiend friends of mine. 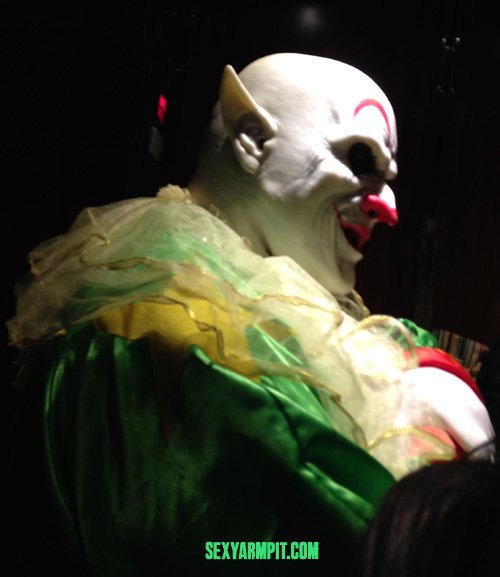 Later, we all decided it was time to head to the room rather than being loud and obnoxious in the lobby which had pretty much cleared out for the night. We hopped on the elevator and ran into a creepy clown guy in the elevator. I wish this was going to lead into some sort of horror movie scenario, but it doesn’t. This guy’s got to get to his room to get some sleep just like everyone else does.

The following paragraph contains situations of a graphic and violent nature, reader discretion is advised.

I’m not sure how it began, but I’m pretty sure I instigated it.

The epic hotel room match between John Squires and myself included tons of back and forth, reverse knife edge chops, and even some painful scientific holds, but ultimately I took home the win. Now you know Johnny wouldn’t let me off that easy. We couldn’t take away his heat like that either. Smart booking dictates that he needed to pull some real #heel type shit.

As I was reeling from the win, I heard Dinosaur Dracula announce me as the winner (just before he passed out for the night grasping his new Boglin) and at that point it really felt like I was in the ring getting cheered and jeered by a packed house at Boardwalk Hall in Atlantic City, home of Wrestlemania 4 and 5 (at least that’s what was going through my mind.) Distressed, John’s wife Jen looked with a tear streaming down her face, she ran into the ring/bed area and tried to console a stunned John. I hobbled over to take a swig of beer for the working man from my can before I could throw it in the trash and…BAM!!!

John spears me into the wall.

Can you blame us? We were a mere 8 miles away from the ECW Arena. Extreme vibes were running wild. This is how the commentators would’ve called it, when you read these, hear them in your mind as they would sound:

JIM ROSS
“SPEARED INTO THE WALL! SPEAR! SPEAR! WHAT A DASTARDLY ATTACK! THE WALL HAS CAVED IN! BUSINESS HAS JUST PICKED UP!”
GORILLA MONSOON
“WHAT A PEARL HARBOR JOB ON THE PART OF SQUIRES…THIS IS DESPICABLE.” – Gorilla Monsoon
BOBBY HEENAN
“AT LEAST JAY GOT TO HAVE THAT LAST SIP OF HIS BEER, WOULDN’T WANT TO SEE IT GO TO WASTE. NOW SOMEONE GIVE THIS MAN A HARVEY WALLBANGER.”
JESSE “THE BODY” VENTURA
“HE WAS JUST CRACKING HIS BACK FOR HIM McMAHON!”
MICHAEL COLE
“VINTAGE SQUIRES”
Bless the people in the adjacent hotel room. They were saints for not calling in a noise complaint. I feel even worse for the newly renovated hotel room itself since it surely felt the wrath of two of the most powerful and destructive bloggers and writers on the face of the planet. Don’t worry, if the earth is ever in some sort of diabolical peril, the two of us will join forces as a tag team and doggy paddle everyone who fell into the Atlantic Ocean to safety. You’re welcome.

It was pretty embarrassing when we ran into our nice neighbors as we both checked out at the same time the next morning. They told us that they thought the mirror was going to fall off the wall in their room. A big thanks to them for being such good sports.

I’m excited to announce my participation in SHIT MOVIE FEST’S 25 Days of SHITMAS 2013! Tom over at Shit Movie Fest asked if I’d like to be a part of the festivities this year and I was honored! Naturally, I couldn’t throw myself into the mix without discussing a film that screamed JERSEY. After seeing some of the DVD’s that Tom picked up to review himself, I noticed one that I’ve been meaning to write about literally for years here at The Sexy Armpit and that is 2005’s JUST FRIENDS. I coerced Tom into letting me take on Just Friends and he was happy to oblige! Thanks Tom! Click the link above to head over to Shit Movie Fest!