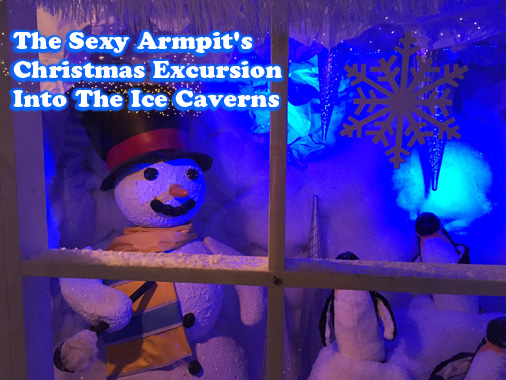 It seems like the post Halloween blues affect me longer with each passing year. I get into a weird lackadaisical funk where I have no energy or motivation for anything. Who knows, it could be seasonal affective disorder or it’s just the fact that my favorite time of the year has come to an end only to make way for frigid temperatures and darkness before 5pm. Winter sucks…except for Christmas, of course. Yet, as deeply immersed as I always get into the holidays, sometimes my Christmas spirit needs a little kick in the ass. I’m sure you can relate. Around here, there’s so many opportunities to send a surge of cheer into my veins, and after some minimal research online, I found a place that I knew would make me feel like I just visited Kris Kringle’s condo in the North Pole. 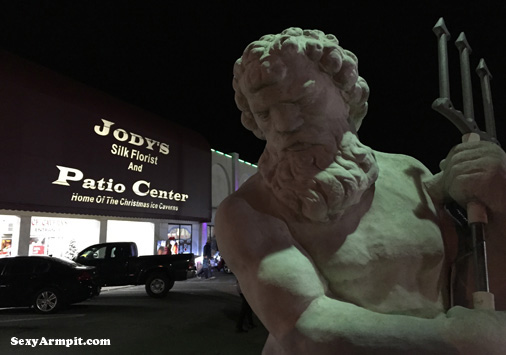 “Home of the Christmas Ice Caverns”
It’s clearly their bread and butter because I don’t know how many people
are clamoring for King Neptune statues nowadays.

I couldn’t go this one alone because I had a feeling it would be too good not to share with friends. Dinosaur Dracula happened to be in the mood for a cup of cheer (a.k.a Tequila), so we brought the ladies and I drove up to Fairfield, NJ. We were all going into this blind. None of us had been to The Ice Caverns before, nor did we even know much about it. I had read stuff about it online for the past couple of years, but considering it was inside of a place called Jody’s Silk Florist and Patio Center, I had my doubts and never made it out for it. To my surprise, this has been a well known Christmas tradition around the state since 1967, but by the time I muster up the motivation for excursions like this, Christmas is usually over. 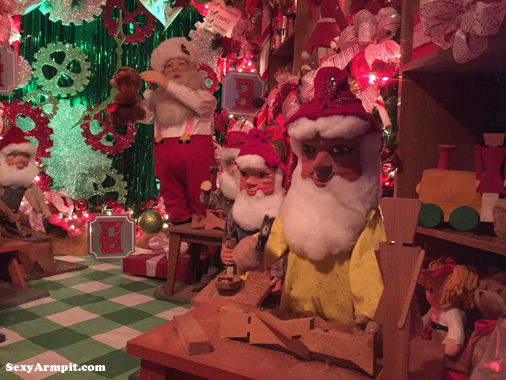 After having to pull a couple of u-turns on Route 46, we parked and took in the surroundings. The exterior was interesting to say the least and we knew we were in for a real treat. The building looked like it was from the ’70s. Between the Christmas tree and shrub emporium next door, and the crazy statues all around, it all looked like a giant mish-mosh of retro insanity adorned in Christmas lights. Man, I already want to go back. 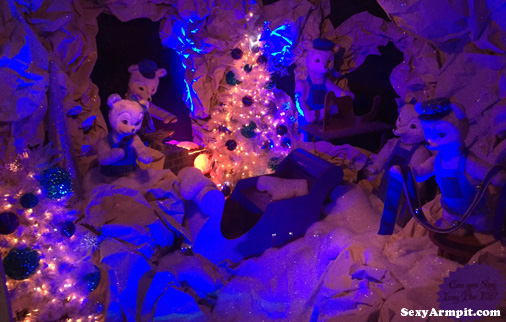 We didn’t even enter the building yet and Matt and I were already calling dibs on what quarter ride-on machines we were each going to spotlight. My intensity and the guttural noises emanating from my body regarding the Flintmobile seen here were not only obnoxious and loud, but made everyone shy away from me like I was a crazy person. 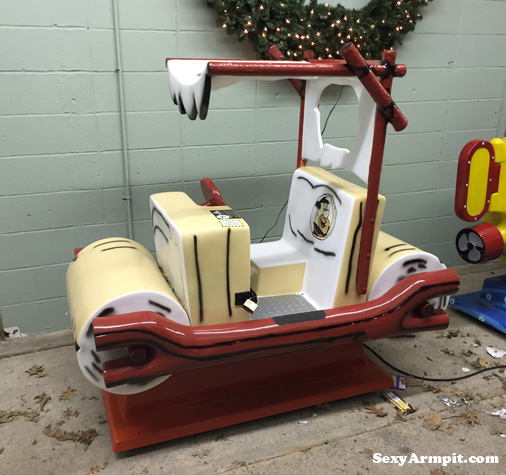 Maximum mark-out for the Flintmobile. After spending $250 dollars on what I thought was a simple trip for an oil change earlier that day, I had a bunch of other stuff I needed done and situations like that make me fantasize about riding to work in a car that absolutely cannot break down unless stepped on by a dinosaur and that vehicle is definitely The Flintmobile. Plus, if I had one I could quit my gym because I’d be getting a badass workout at the same time, but I’d show up at work like a sweaty disgusting mess. Scratch that idea, I’ll just snap the picture. 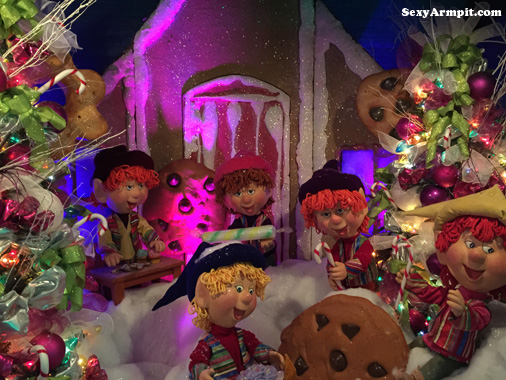 Making our way inside, our brains were bombarded with a bevy of Christmas decorations, trees, ornaments, dolls, and knick-knacks of all kinds spread over 10,000 square feet. That was all good, but just like in The Goonies, I felt like yelling “Where’s the gold Mikey!” I wasted no time asking the cashier impatiently “Which way to the Ice Caverns?” I was getting such a good feeling about what we were in for. It almost felt like the moments before going on an old rickety dark ride that is so classic it can’t be beat, even by todays standards. 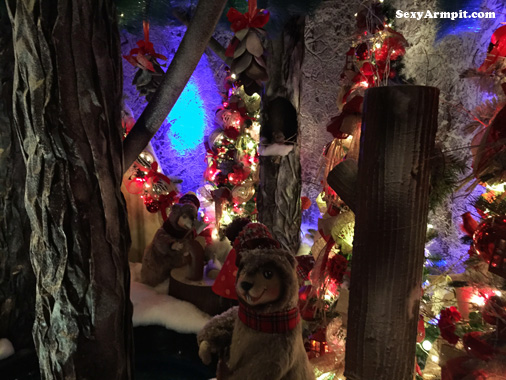 Admission was reasonable, only about $3 bucks per person, a bargain in New Jersey. Even with that kind of pricing I still found their giant reprinted old school style Christmas coloring books to be way overpriced at nearly $20 bucks! 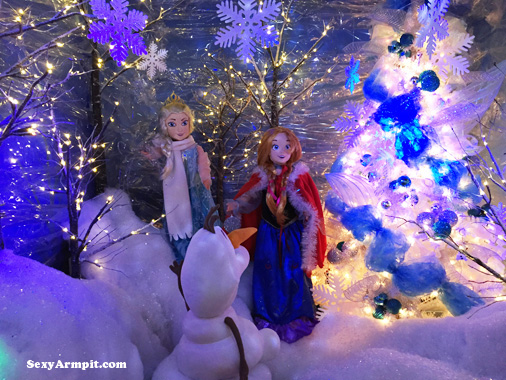 There’s a group of pizza loving amphibious creatures that live down in the sewer and know some fancy ninja moves, you know who I’m talkin’ about, right? That’s right, our friends the Teenage Mutant Ninja Turtles had their very own custom made Christmas themed window scene, and folks, it was incredible. They called it a “Cowabunga Christmas.” In the scene, The Turtles all had Santa hats on and were set up in a sewer lair scene and were decorating for Christmas. Raph is dressed as Santa while Michelangelo balanced a pizza on top of his head. This was truly a Christmas miracle.

On the way to get some food afterwards, I commented on how the Turtles looked homemade and Matt made the good point that they had to have been leftovers from back in the early ’90s because they definitely looked like they were based off the movie Turtles. Either way they looked fantastic.

There were other awesome things about the Ice Caverns and our other exploits that night and I’m fairly certain you’ll be hearing about a few of the key ones over at Dinosaur Dracula very soon! 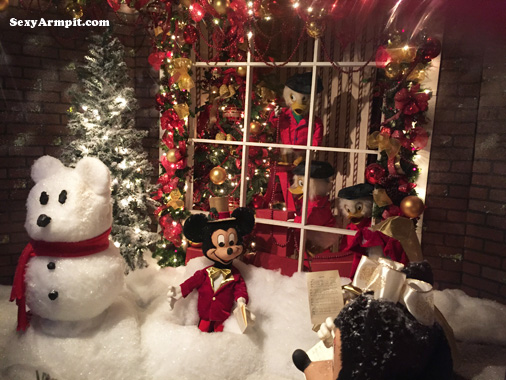 This is one of those quirky places that New Jersey is known for. We have so many of them that it’s easy to let them slip through your fingers. Hell, I didn’t even know about this place until recently and I’ve lived here my whole life. There are about 100 other obscure places like this around our state and thanks to blogs and podcasts they are getting a lot more buzz than ever. People like us, the nostalgia buffs and the pop culture freaks, we feed on places like this. This is the perfect day trip for kids as well as adult kids like me. The Ice Caverns will surely make you drool, but your drool will taste like peppermint of course and you’ll go home with your Christmas spirit jacked up to the highest degree.

The Ice Caverns are located inside of:
Jody’s Silk Florist and Patio Center in Fairfield, NJ
http://www.jodyssilkflorist.com/thechristmasstore.html

Artist and New Jersey lover Scott Modrzynski of Mojo’s Work, has quite and interesting life story. You can check it out for yourself, but he’s got a ton of love and respect for New Jersey AND The Teenage Mutant Ninja Turtles, two forces combined and strikingly illustrated in his TMNT/New Jersey art featured here. What a killer combo from Scott! He’s got so much more at his site with his NJ Badass series which are mash-ups of our state AND characters like Deadpool, Scooby Doo, Mario & Luigi, Superman, and Spiderman just to name a few! Now, onto my thoughts on the new Teenage Mutant Ninja Turtles movie, in theaters now.

Don’t call this a comeback. The Teenage Mutant Ninja Turtles have been here for years and haven’t really ever gone away. Nickelodeon grabbing full rights to the property a few years ago has been a dream for fans. Since the latest cartoon series premiered, and now the new feature film is hitting theaters, we’re in the midst of Turtle fever all over again with new toys, special edition sodas and perhaps the most logical, pizza tie-ins.

Michael Bay has modified a few details of the Turtles here and there, most notably, the look of our beloved pizza devourin’, Foot Clan fightin’ Turtles. What scares me is that regardless of what true die-hard Turtles fans feel about this film, if it does big business at the box office, which, from a curiosity standpoint it’s basically guaranteed to, Bay’s alterations will probably stick around for the long run.

Very early on, well before critics actually saw this film, I was put off by promotional photos and rumors. Now that people are finally seeing it and tweeting such flat, lackluster feedback about the movie, I’m even less compelled to go to the theater to see it. I can wait for this one to hit Redbox. Meanwhile, I’ll watch my DVDs of the original Teenage Mutant Ninja Turtles film from 1990 which remains one of the best movies of the superhero genre as well as The Secret of the Ooze which is still badass too!

I remember seeing the 1990 original in the theater as well as the sequel, and I enjoyed both films immensely. The only minor issue I had with the original was the casting of April O’Neil. From a performance standpoint I had no complaints about Judith Hoag, but I couldn’t help feeling that there was a more appropriate actress for the role.

At the time, the ’80s were still lingering around and a logical choice for April would’ve been an actress who starred in one of the quintessential kids movies from the ’80s. I always felt that Jersey’s own, Kerri Green, who played Andi in The Goonies, would’ve been an awesome April O’Neil. If anything, she would’ve embodied the cartoon April perfectly. Think about it. This leads me to the hotly debated issue of Megan Fox. Stunt casting at its best.

Having Angelina Jolie shoved down our throats for so many years was always a similar topic of discussion for me. I was never so crazy-obsessed with Jolie from a physical standpoint nor was I ever seduced by any of her films. Conversely, Megan Fox is super hot and it’s a near fact that her acting ability is not on par with other actresses of her age range, but admiring her (not her wacky thumbs) might be the lone reason for me eventually giving Ninja Turtles a watch.

Admittedly, I was even a fan of TVs The Next Mutation when it first aired, mainly because it was cool to see a live action offshoot of the TMNT movies, no matter how Power Rangers-esque it was. Judging by what I’ve seen and heard about the new Teenage Mutant Ninja Turtles film, I might just be better off watching my bootlegs of The Next Mutation this weekend!

Head over to our friend The Sewer Den to read his expert opinion on the 2014 Ninja Turtles film:
http://www.thesewerden.com/2014/08/tmnt-2014-movie-review.html