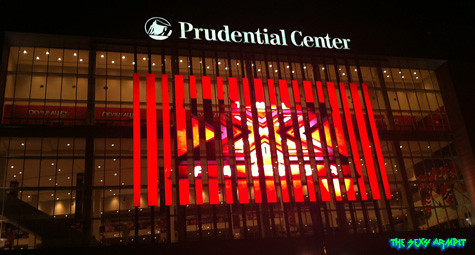 Reality shows bothered me since the first ever Real World on MTV aired in 1992. I’ll admit that I was into the first few seasons of American Idol, but then I dropped off like an Acme anvil over a cartoon cliff. Reality shows killed sitcoms and that is why I will forever hate them. “Give me Webster, or give me Death!” – Me.

My built in hatred of reality shows had me disgusted as soon as I heard that Simon Cowell was bringing The X-Factor to the U.S. There’s no need for another televised singing competition. Think about it, when did you watch Star Search? I remember flicking channels and seeing it when nothing else was on and I was bored out of my skull. Usually it aired at some weird time, like 1:00 PM on a Sunday. Nope, not X-Factor. I’m sure it will be front and center in Fox’s fall lineup.

The Sexy Armpit attended The X-Factor auditions held last night at the Prudential Center in Newark, NJ. After waiting outside for an hour in 95 degree heat on a line nearly as long as one for a Justin Bieber kissing booth, we were finally let into the building. From there we were told to choose our own seats, a task that could’ve turned into mass chaos, but went surprisingly smooth.

The M.C, who happened to be a Jersey guy, went through his shtick and told us NOT to BOO the singers. WHAT? Isn’t that what we all do at home when watching these lame shows? If we don’t like someone we should be able to communicate that. I hear the Idol audience booing all the time. Aw, how sweet, The X-Factor is being all tender and compassionate. Simon Cowell is running the damn show! Simon, you better not have instituted this stupid no Booing policy.

The judges, Simon, Paula, Nicole Scherzinger, and L.A Reid, all walked out to their table in a swirl of lights and maniacal applause to Guns N Roses “Live and Let Die.” Simon wasn’t nearly as entertaining as he was on Idol, hopefully it’s because it was merely the audition phase. Paula’s responses were still all over the place, but more constructive. Nicole sounded like she was stoned out of her mind on crystal meth. Everything she said sounded like she was on a higher plane of existence. Maybe she was nervous since it was her first time judging on the show. L.A Reid was actually the best part because he cut to the chase. He’s an icon of the music business and someone who can provide an expert perspective to the singers.

Did they find any talent in Newark, NJ? Hell yeah they did! Some of the singers actually thrilled the audience to the point of standing ovations. One Brooklyn woman resurrected Billy Vera’s “At This Moment,” and blew the roof off the Pru Center. Needless to say, she made it through as did many other superb singers, many of whom hailed from The Garden State. But don’t you worry, there were enough laughable performances to drop into those promos that will suck you into watching the show.