Calling me SUPER PUMPED after I originally saw this video reporting the opening of The Ghost Ship at Morey’s Pier in Wildwood was an understatement. Since the ride opened, there were several other reports and reviews of the ride around the ‘net and in local papers that mistakenly referred to the Ghost Ship as a Dark Ride, which it most definitely isn’t. In case you plan on hitting the Wildwood boardwalk before the summer officially comes to an end, heed my warning: The Ghost Ship is merely a walk through, and not a very scary one either.

Most of the conventional aspects of a walk through haunted house are present in the Ghost Ship. There’s a hallway with inflated walls that you have to push your way through, there’s creepy actors hanging in shadows and corners, and of course there’s times when you feel like a complete idiot because you don’t know if you’re going the right way. The ghoulish displays and the creepy atmosphere were well done and deserve credit for the fine detail, but overall it just wasn’t very thrilling. 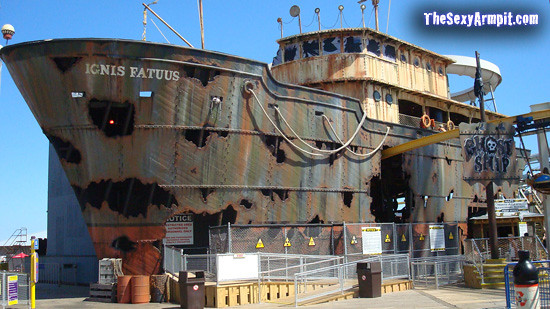 The Ghost Ship attraction has 2 main factors riding against it. First, it’s not much different than the majority of walk through haunted houses you’ve been to, and second, it’s pretty damn expensive for such a short length of time. One adult admission will soak you nearly $11.50, and there’s not even a nice little boat ride involved! Honestly, I was hoping the entire time I was walking through the ride that I’d eventually reach the part where we all loaded onto boats. I’d be happy to pay extra for a true dark ride, whether it’s in a boat or a coaster car. I guess it would be silly to ride a boat while inside a ship.

Many people are into the walk through style attraction, so it’s easy to be sucked in by the hype and cool advertisements for it. I fell for it and was disappointed, but I bet The Ghost Ship is immensely more exciting for a kid. Boardwalk rides are all geared toward kids, as they should be. But, years ago it seemed the attractions didn’t hold back. When I was a little kid, I went to Castle Dracula on the Wildwood Boardwalk every summer, which was an authentic Dark Ride, and in comparison to The Ghost Ship, it was crap your pants scary. They just don’t make ’em like they used to! Maybe The Ghost Ship would’ve been more effective if I watched The Triangle first.