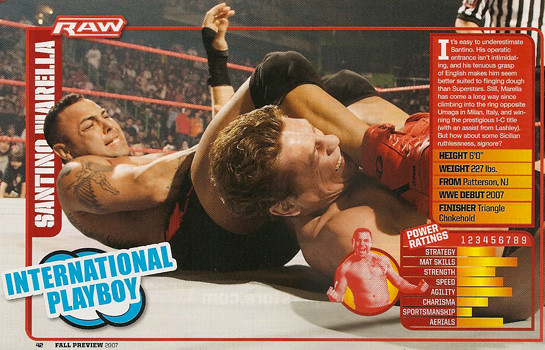 “Wrestlemahnia” as Santino Marella pronounces it, is upon us! Whether you’re a wrestling fan or not, it’s the Super Bowl of sports entertainment. That isn’t some cliched pop culture analogy either, it’s true. No matter how many cringe worthy moments there usually are at Wrestlemania, I still get excited for the event after all these years. And I’m sure you’ve heard by now that Snooki from Jersey Shore will attempt to channel her fiery cat fighting skills as well as her horrific fake tan to help John Morrison and Trish Stratus subdue Dolph Ziggler and Lay-Cool at Wrestlemania 27.

In honor of the funniest man in WWE, Santino Marella, I’ve dubbed tonight Santino Saturday Night. I’m sure you can guess what tomorrow morning is! Why would I dedicate an entire post to The Tortellini of Temptation? Aside from constantly making me laugh, when Santino was first introduced in WWE he hailed from Paterson New Jersey, which is spelled with one T contrary to it’s spelling in the picture above. Nowadays, he’s announced as being from Calabria, Italy, but he was actually born in Canada. No matter what, I still fondly recall the days that the WWE writers got a kick out of claiming he was from New Jersey. Tomorrow, Santino will team up with his partner Vladimir Kozlov, The Big Show, and Kane to take on I-C Champ Wade Barrett, Ezekiel Jackson, Heath Slater, and Justin Gabriel.