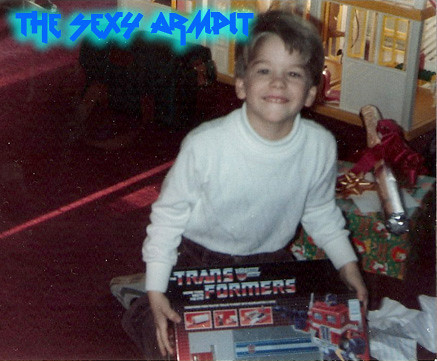 That’s me receiving Optimus Prime as a birthday gift

Through the years it was easy to get bogged down in the excessive amount of Transformers incarnations through the years. I have to give credit to the property though, it’s enjoyed a long evolution and hasn’t ever really gone away.

Transformers would not have enjoyed the same type of resurgence if the 2007 big screen adaptation was never released. I doubt there would be the same type of clamor for Transformers stuff if Michael Bay never got his filthy rich hands on them. But what has shocked me most about the franchise is how much of a difficult time I recently had getting into the original ’80s animated series. I noticed that Hub network has been airing reruns of the original Transfomers. Just for nostalgic purposes and for the fact that the 3rd Transformers film, Dark of the Moon, is being released, I set a couple of episodes on my DVR and tried watching them.

As much as I felt I would be in for some ’80s fun, sadly, the episodes were borderline boring and even a bit hard to understand. Although I’m a sucker for old cartoons, especially those I loved as a kid, going back and watching Transformers just didn’t hold my attention at all. Expecting a 25 year old cartoon to enthrall and entertain me seems totally unrealistic, but even the silliest episodes of He-Man and She-Ra still mesmerize me. It’s a shame too because I was a fan of Transformers as a kid, and so were most of my friends, since we were the Prime (pun intended) audience for it. I had my Transformers lunchbox and a bunch of the toys, but it was never a full on obsession for me.

Attempting to pretend like I was a transforming robot was awkward and not nearly as fun as holding aloft my magic sword and becoming the most powerful man in the universe. Now, I know that a lot of people will vehemently disagree with my sentiments, but I have my reasoning. Subconsciously perhaps, I made more of a connection with human or human-like characters. I always preferred GI Joe over Transformers and although I enjoyed Thundercats immensely too, He-Man and She-Ra always edged them out if I had to choose what show I liked better.

In my eyes, the best part of the original animated Transformers series is Megatron. he was the reason I watched the show. I always liked villains and I appreciated how he looked, sounded, and acted in the original series way better than how he is in these new films. That’s not to say I didn’t also love Optimus Prime. What boy in the ’80s didn’t think Optimus Prime was awesome? He’s the quintessential character of the franchise. Even in the new films he still kick ass. The hero has a modernized look but is thankfully still voiced by the iconic Peter Cullen. Anyone else would be 2nd rate.

Regardless of how the original series holds up, the film franchise and even the recent Transformers Prime are both well done and easy to get into especially if I was 7 years old right now. I have yet to watch Transformers 2: Revenge of the Fallen, so hopefully I’ll get to it before Dark of the Moon disappears from theaters, which will probably be in about 3 weeks. Then it’s straight to DVD and Bluray by the end of August. Maybe if Megan Fox played her cards right she’d be in Dark of the Moon and I’d make it more of a priority. Damn her and her Hitler comments. Funny how when I was a kid, I wanted Optimus Prime, and now I need Megan Fox to hold my attention.