Some people I know are often curious to see how I spend my money. Or should I say blow my money. Some people prefer to hoard their money, but my approach is that you can’t take it with you, so enjoy it while you are here. Many people live by that type of credo, but some indulge in a more extreme fashion than others. A woman can go out and buy a purse for $400 bucks and have no problem justifying that purchase, so I feel that an action figure, a box of cereal, and some snack cakes are more than worth it.

In the MOTU Classics line, every figure and vehicle is referred to as “museum quality,” which I can’t argue with. The price point is about double or triple the cost of an action figure on a  rack in Toys R Us. That sounds crazy, but believe me, I don’t buy every figure that comes out. The money I have spent on figures from this collection has been well worth every penny.

The time and careful attention to detail put into these figures is incredible. The badass looking Batros, stealer of information and books, looks like he just walked out of a TV showing his ONE episode appearance in “The Great Books of Mystery.” He’s part of Matty Collector’s Filmation line, which is inspired solely by characters from the original cartoon series as opposed to the mini-comics, or 2002 animated series.

So far, the Monster Cereals have been all the rage this season, and rightfully so, but I’m afraid Halloween Crunch is being overshadowed. Since it’s introduction in 2007, I haven’t had the easiest time finding Halloween Crunch locally. The last couple of years I’ve found it at Wal-Mart, but before that I felt like it was some kind of treasure that only appeared at certain stores around the country. Several of the gimmick Cap’n Crunch variations have been very elusive, but Halloween Crunch is easily my favorite. I’d even walk the plank and say that Halloween Crunch is my favorite of all the seasonal gimmick cereals presently offered throughout the year. It turns my f’n milk GREEN, what more is there to say?!! 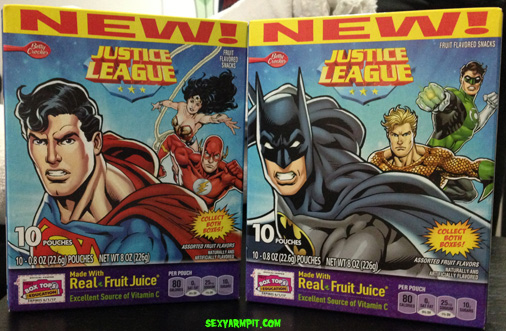 The Justice League fruit snacks box art is incredible and there was no way I could pass these up, especially with that giant notification at the top of the box that these are um…NEW! It’s exciting to see all the DC heroes getting some attention finally. As always, Batman looks like he’s about to kick somebody’s ass for taking a picture of his box.

If only these existed when I was in elementary school! Fruit snacks were as big a part of lunch time in school as the type of chips you brought. There was a certain measure of respect and jealousy if someone brought a type of snack that you hadn’t eaten before or one that was harder to find. I always considered myself lucky if I had PB&J, a Ssips juice box, a bag of Doritos (or Bravos which sound second rate, but are also very good), and a dessert such as anything Little Debbie (which we’ll get to in a minute) or a “pouch” of fruit snacks.

Early on here at The Sexy Armpit I wrote about my affinity for 3 types of fruit snacks in the 80s, there was Sunkist Fruit Wrinkles, Shark Bites, and Thunder Jets. Most of the fruit snacks are similar today, containing one or two offbeat colors like black or pastel blue. Below you can see that Superman is pastel blue which pretty much excludes him from portraying a fruit flavor. Something tells me that touting “real fruit juice,” doesn’t pertain to the pastel blue variety of fruit snacks. 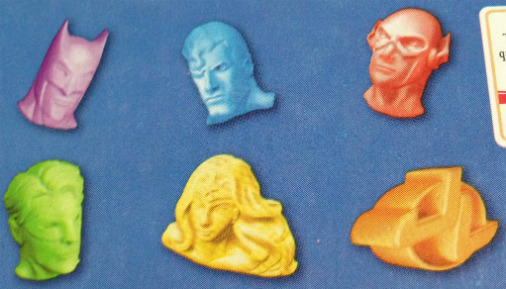 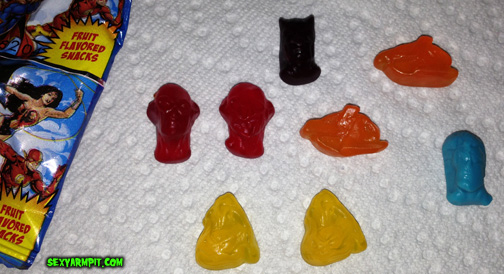 The fun part about fruit snacks like Shark Bites and Thunder Jets was the chase. The commercial would get you all geared up to rip open your pouch to see if you got one of the specially colored and flavored snacks. The Great White and The Stealth Bomber respectively were the chase variants as it were. I don’t think there’s a mystery fruit snack in these, but you can compare the box colors to the ones I got and easily notice that the black Batman is supposed to be purple. The flavor was grape-like, but I’m not sure if it’s officially grape or blackberry. Either way, these brought me right back to the lunch table in school!

Target just sucks you in, doesn’t it? Every damn time I’m in Target I wind up spending an exorbitant amount of money. In this case though, I am able to balance out my ridiculous purchases, like this glass skull filled with margarita mix, with other more justifiable purchases such as actual food, albeit occasionally healthy food, as well as necessities such as toilet paper, toothpaste, and laundry detergent. Let’s see how this shit turns out. I’m sure it’s going to taste like every other margarita mix, but one never knows. It may taste like Mountain Dew, we shall see momentarily.

The bottle clearly puts it over the top. I wouldn’t have bought margarita mix if it was in a witch, ghost, or werewolf shaped glass bottle, but skulls always do the trick for me. Since I probably couldn’t drink a whole bottle of vodka in less than a year or two, I’d probably never buy Dan Akroyd’s Crystal Skull vodka. Tequila and margaritas on the other hand will disappear rapidly at my place.

Verdict: not so good. After the mix was mixed it tasted more bitter than sweet and I prefer it to skew a bit on the sweeter side. After having margaritas at Jose Tejas in Woodbridge, most other margaritas don’t taste as good. Fortunately, after the mix is done, we are left with a cool bottle. I’ll probably dump the mix and put some Berry Blue Kool-Aid in it.

Tales From The Crypt Season 2

It’s easy to regret impulse buys, but Tales From The Crypt Season 2 seemed like a great deal. I picked it up for $9.99. Before I committed to it by dropping it in my cart at Wal-Mart, I checked Amazon and a few other sites on my phone to make sure it was a good price. If I could get it on Amazon for $5.99, I would’ve dropped it right back in my cart. At the time, Amazon listed it for well over $20 dollars so I bought it. I wasn’t actively seeking the Tales From The Crypt series, but Halloween is coming up and I figured even if I watch a couple of episodes it was worth the purchase. 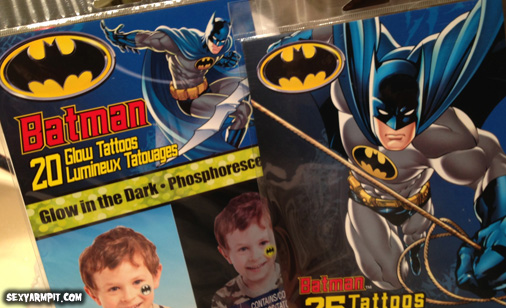 It feels like every time I go to Target or Wal-Mart I wind up buying fake tattoos. Even though I’m an adult and have actual tattoos, for some reason I get sucked in by kids fake tattoos big time. Reason for falling into the fake tattoo trap is probably because I always loved fake tatts as a kid (what kid doesn’t like getting a fake tattoo?), plus they aren’t permanent, so if I want the Riddler AND Batman on my arm right next to each other, I can do that. Better yet, tonight I can finally pretend what it would be like to have a full sleeve of Batman tattoos. I didn’t even realize that some of these were glow in the dark a.k.a phosphorescent! Now I’m excited. I also just remembered that I have 2 packs of Justice League tattoos that I never opened. By the end of the night I may become the Lucky Diamond Rich of comic book circles. 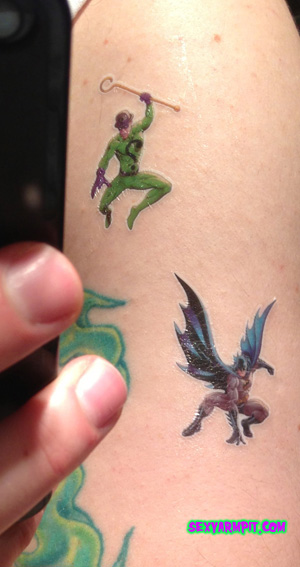 After opening the package I forgot what a project the fake tattoos are. The ritual that your parents went through to get the tattoo on you and the anticipation that overcame us is a memory a bunch of us have. I don’t really know anyone my age who has never had a fake tattoo applied to them as a kid. You should get some and act like a kid one night. Only thing is, if you’re deciding on getting a real tattoo, this isn’t a good indication of what it would be like to get one because there’s absolutely no pain involved, and these will probably peel off by the end of the night.
Little Debbie Pumpkin Delights

Even though they are smiling, those are some pretty scary pumpkin faces
for what they consider a “cookie”

If there was a movie about my childhood, Little Debbie Snack Cakes would easily get free product placement. In our house growing up we had a huge, deep drawer that was aptly named “the snack drawer,” because we were so insanely clever. This drawer would always be crammed with all kinds of snacks that my sister and I could eat when we got home from school to hold us over until dinner time.
The snack drawer was a who’s who (or I should say what’s what) of ’80s snacks. The snacks were there as more of a safety precaution really. They prolonged me from literally becoming a raving lunatic who destroys anyone and anything obstructing my mission of maniacally seeking food. In other words, by time I got home from school I was starving. When I was a kid, being hungry was always so much more of a dramatic affair too. Don’t ask me why because looking back, school let out at 3:30 and it was only a couple of hours before that when I ate lunch. Nowadays I usually go 5 or 6 hours from lunch to dinner.

At any given time there would be Peanut Butter Boppers and various trendy snacks of the day, Drakes Funny Bones and Coffee Cakes, some really old Pixy Stix banished to the bottom rear, and then dominating the cavernous drawer were the Little Debbie products such as Swiss Rolls, Nutty Bars, Peanut Butter Bars, Oatmeal Cream Pies, Fudge Brownies, and Strawberry Shortcake Rolls. Reading this laundry list of snacks it sounds like we were the fattest fucks ever to walk the planet in the ’80s, but really my sister and I practiced self control. Most of the time we’d be limited to one of these snacks after school and we adhered to it.

Little Debbie is one of the companies who does an excellent job with “Fall-ifying” their offerings. Around September/October you start seeing these Pumpkin Delights, which actually are pretty delightful. They are considered a soft cookie and inside is pumpkin filling. The Pumpkin Delights have stiff competition though since Little Debbie also offers other gimmick items for the season like Bat Brownies, Brownie Pumpkins, and the ever popular Fall Party Cakes.

I hope you’re enjoying your Fall season so far. October is just a few days away so make sure to keep coming back to The Sexy Armpit for more of the Halloween countdown!
www.SexyArmpit.com