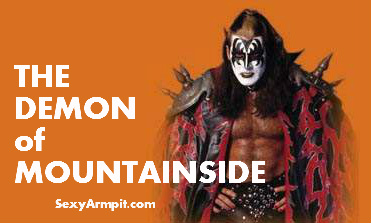 One my friends used to always pose a theory to me that he formulated about the crossover appeal of KISS and professional wrestling. He used to swear that every KISS fan was also a pro-wrestling fan and vice versa. I’d have to agree with him, but it’s not an absolute. Of course, they have many elements in common such as theatrics, both properties put on an entertaining spectacle, they both have legions of loyal fans, they both feature people in costumes, as well as incorporate colorful lights, loud music, and pyro. But, unbeknownst to him, only a couple of years before he hypothesized about KISS and wrestling fans, the two worlds merged for a brief moment in time.
When Gene Simmons from KISS struck a deal with then head of WCW, Eric Bischoff, to create a KISS inspired wrestler, it seemed like a such a logical mash-up at the time. For the crossover KISS/wrestling fans, this was literally a dream come true. After all, KISS was a band of four larger than life characters that translated seamlessly into comic books, but putting them in the squared circle was uncharted territory. It sounded good on paper.

It also sounded great to the crossover fans. In fact, just thinking back to when The Demon wrestled in WCW, as much as I didn’t enjoy WCW’s product, it was pretty thrilling for me to see a Gene Simmons gimmick in my other favorite universe, the world of professional wrestling. With all the lame gimmicks in wrestling through the years including a garbage man, a plumber, and a rooster, having a KISS Demon was actually far from lame. To those who weren’t familiar with KISS at the time, they probably thought the Demon was supposed to be some Satan worshipping fiend from beyond the gates of hell. Both are appealing in their own way. 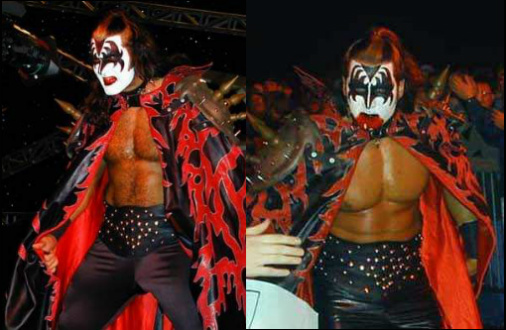 Meanwhile, the Mountainside, NJ-born Dale Torborg’s wrestling career began after meeting Hulk Hogan and Macho Man Randy Savage on a flight to L.A. Early on, Torborg wrestled as the MVP (Most Violent Player) gimmick in the AWF, WWE and WCW. He played an evil baseball player inspired by the film The Warriors that also tied into his own baseball experience (his father Jeff managed several MLB teams and Dale’s own minor league baseball career ended with a fastball to the face.) Then, in 1999, during the first couple of Demon appearances in WCW, Brian Adams a.k.a Crush played the character, but he never actually wrestled as the gimmick. Soon Torborg was chosen to become the Demon character because Gene Simmons thought he looked most like him.

Visually, The Demon was badass. Torborg portrayed Gene Simmons in a more authentic way than Brian Adams. Torborg was such a KISS fanatic that he knew how to mimic all of Gene’s stage mannerisms. “I don’t think there was a Halloween that I didn’t dress up as one of the members of KISS” said Torborg in an interview with ESPN. For any member of the KISS Army, it had to be a real kick to be playing one of his rock and roll superheroes. Torborg mentioned that his choice to take on the Demon character wasn’t popular a one with his mother who “…hates two things, wrestling and KISS, and I’m doing both” he told ESPN. Regardless of what his mom thought, Torborg loved being The Demon .

The concept could’ve went far, but it was just the wrong time in the wrestling business. To help debut the Demon wrestler, KISS performed live on WCW Nitro . According to various wrestling sites and Wikipedia, the performance turned out to be a very low rated segment, which dispels my friends theory about the KISS/wrestling crossover. Fans of WCW, especially at the time, were bombarded by WWE Raw and WCW Nitro, and they wanted wrestling, not Mr. Simmons’ Wild Ride so to speak. WWE was coming very close to buying out WCW. Eric Bischoff lost his job and The Demon kept getting buried and losing most of his matches. WCW was contractually obligated to feature The Demon from then on, but they weren’t required to make him soar to new heights within the company though, so he wound up blacklisted.

From a personal standpoint, I really loved Torborg as The Demon. It was a cringe inducing moment for many wrestling fans at the time, but just the idea of two of my favorite things colliding nearly melted my brain, in a good way. Younger wrestling fans may not have been familiar with KISS at the time, but The Demon was still so imposing that it didn’t really matter if they knew KISS as a band or not.

Dale Torborg was a perfect choice to play The Demon. I appreciated how he was a lifelong fan of KISS. As far as wrestling ability goes, he’s a big athletic guy at 6’7″, had a good physique, and was better in the ring that many of the guys on the WCW roster at that time. My only complaint was his finishing move (Cobra Cluth Slam a.k.a The Love Gun) didn’t capture his power or match his look.

Torborg is proud of his days as The Demon as he told WWE.com in their column Where Are They Now? posted on August 3rd, 2011. After WWE bought out WCW, Dale Torborg went to work in the MLB. Since 2004, Torborg has worked as the conditioning coordinator for the Chicago White Sox, and he dabbled in wrestling again, making appearances in TNA for a couple of years starting in 2005.

Not every wrestling fan was as pleased with this KISS/Wrestling combo. Prorasslin.com took the stance of the non-KISS fan-wrestling fan by stating that “This gimmick was bad” and that Torborg was “rightfully condemned to jobbing for the rest of his professional career” in their column Ghastly Gimmicks. It’s unfortunate that The Demon gets lumped into the pile of failed gimmick wrestlers. Naturally, I question why he was written to face the guys that he did and lose. If he was around after the WWE takeover, it would’ve been cool to see him in feuds with guys like Goldust or Kane, both would make memorable programs for sure.

It would probably never happen, but if Gene Simmons were to allow his likeness to be used again, any number of up and coming wrestlers could take on The Demon gimmick. Vince McMahon would never bring him back though because he couldn’t make any money off a character that he didn’t own the rights to. It would have to be changed to something like The Shemon and she’d squash all the ladies in the Divas division.

*Dale’s father Jeff was born in Plainfield, NJ and went to Westfield High School, played baseball there, and then went on to play at Rutgers.