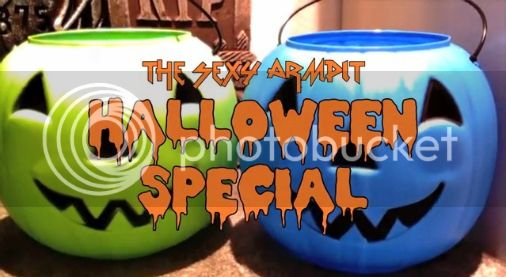 Watch the 2011 Halloween Special to prepare for The 2013 Special
which is coming this week! The 2013 special is a direct sequel to 2011.
Nothing excites me more during the year than Halloween. Many of you feel exactly the same way considering that we receive a record number hits every October. For this year’s Halloween Countdown we’ve been presenting horrific and halloweeny posts for you since September 1st, earlier than ever for us. If you read Dinosaur Dracula, you would know that Matt has marked 2013 as the best Halloween season ever, and it’s basically a 100% fact at this point for so many reasons. Not convinced? Keep reading. Even if you’re more than convinced, keep reading too. I’m building toward asking you for your help! And never fear, I am not asking you to finance a relatives cross country bike tour either.

This season so far, not only have we seen the Monster Cereal blitz in full force including the retro packaging and the return of Yummy Mummy and Fruit Brute, but there’s also been such a bevy of Halloween themed products lining store shelves that are pretty fantastic. Buying “stuff” to enhance the spookiest Holiday is always part of the fun. How can you live without pumpkin shaped cheese balls or a skull shaped bottle of margarita mix? C’mon, these are necessities!

Halloween isn’t only about dropping wads of hard earned cash on gimmick product variations though. The season wouldn’t be the same without heading out to haunted attractions, or going to masquerades. I hope you are all able to fit at least of a couple of these into your October calendar. If you aren’t invited to any, crash one.

What’s on TV is also an important aspect of October. Thankfully, AMC has been running a shit ton of horror movies nonstop, and speaking for those of us who get that channel, we appreciate it! There’s even a Toy Story Halloween Special airing tonight. With all this great programming, you still can’t just rely on TV alone to provide Halloween entertainment. October is the best time to whip out your DVDs and fashion your own horror movie marathon. Your marathon doesn’t even have to include horror films if you’re a scaredy cat. You might want to compile a list of movies set in the fall or a movies that feature fleeting shots of a pumpkin. That will be incredibly less fun, but to each his own.

Back in the old days, movie theaters showed cartoons, newsreels, and short serial adventures before the feature film. Now we’re bombarded with ads, Friends trivia, and more trailers than you will ever want to watch consecutively in your life.

What am I getting at? Well, if you’re new to The Sexy Armpit, I have this little Halloween Special from 2011 that I’m not sure if you saw. If you have seen it, I’m asking that you might watch it again to prepare you for our 2013 special that is on it’s way to YouTube! The 2013 Halloween Special is a direct sequel to 2011’s since Hurricane Sandy really brought the mood down last year. Since this year’s special is a little out in left field, it will certainly help if you’ve seen the first one.

Honestly, I don’t like asking people for things, but in this case, I feel it’s worth bothering you about. So, if I may, I’d like to be a part of your marathons and Halloween celebrations. I’m not just asking you to watch our upcoming 2013 Halloween Special, I’m hoping this ridiculous mish-mosh of pop culture will serve as an intro to your horror movie viewing in the same way that cartoons and serials were presented before feature films back in the day.

With all this modern equipment such as smart TVs, smart phones, X-Boxes and iPads, you might even have a way to watch it on your TV right before your annual viewing of Trick r Treat or Halloween! That would be optimum! We’re very anxious for you to see this year’s special and we’re hoping it will hit by Friday if nothing catastrophic happens. Please Mother Nature, no hurricanes this year.

Dinosaur Dracula officially ushered us into the Halloween season in a radical fashion at midnight last night. We have arrived, and I’m excited. As Matt at Dino Drac mentioned, we’ve got a while to go before the day we wait for all year. Ultimately, the most fun is in the build-up to October 31st, so let’s revel in it together. Please join me for a Sexy Armpit-style Halloween. This year will feature even more ghastly fun than ever before.

OK, here’s the situation. All throughout September, The Sexy Armpit will be all “Halloweeny,” and then beginning in October I have something extra special for you, and dare I say it, pretty different from what you are used to. I’ve been planning this for a couple of months and I’m hoping you enjoy it.
What I have up my sleeve for October is still not 100% complete, but I’m working on it each night. It’s more subtle and not the typical Halloween countdown material. If I buy something halloween-themed or I’m doing the usual stuff like that it will most likely be posted in September.
Since Halloween is so important to me and I’ve been taking part in the countdowns for a long time, it was time that I came to the party with a different approach, and it hasn’t been easy. I’ve ran into a lot of challenges along the way.
The season inspires me and I want it to reflect in the content I’m delivering here. It’s time for me to take things a bit more seriously and not just f*ck around. This is all very vague, I know. Hopefully it does pique your interest enough to want to come back and check out what I have planned for October 1st. It’s not as much of an in your face October from me as you might expect. After all, there’s only so many reviews of Pumpkin Spice Milk you can do. This October, I want to delve deeper into the season and bring you with me.
For those fellow bloggers reading this, be sure not to burn yourself out. If you’ve been doing the countdown thing for a long time, you know it’s not easy. We have a long stretch. Take a few days off once in a while. Most of us don’t get paid for this so make it fun. Don’t let it become your job. Check out everyone else’s blogs too because there’s clearly a lot of hard work that goes into them and it yields a lot of creativity and entertainment.
CHECK OUT THE BEST POSTS FROM HALLOWEEN 2012:
Christina Ricci – Garden State Playmate October 2012
The New Jersey Witch Trials?
Freddy, Jason, Michael Myers: Horror Movie Prequels from Blinky Productions
Eerie, Indiana’s New Jersey Connection
X-FILES: The Jersey Devil
Amityville House at Bargain Pricing
www.SexyArmpit.com