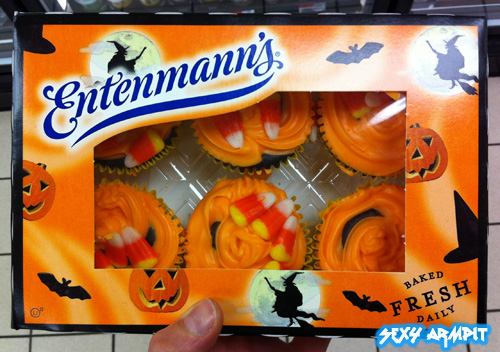 Halloween time brings annual traditions that I look forward to all year. Although some of my traditions get tossed so far back in my memory banks that they only pop into my head once October rolls around. The last day of September already reminded me of the greatest Halloween treat known to mankind, Entenmann’s Halloween Cupcakes. I could just picture Sam from Trick r’ Treat devouring these luscious little things.

If I wanted to let myself go and negate all the times I’ve forced myself to go to the gym, I would eat Entenmann’s cakes, cookies, and pastries 4-6 times a day. But I’d say I eat them twice a year. Once a year I get the burning desire for their soft chocolate chip cookies which are the best cookies of all time, and during Halloween time, if they can be found in stores, their Halloween cupcakes! I’ve been eating these for many years and each year they seem to get more popular because they vanish from shelves so quickly.

What’s so great about these cupcakes is that they are just jam packed with Halloween goodness. Think back to when you were young. How many products had Halloween gimmicks? I remember there being a lot more than there is now. There were cereals, desserts, sodas, and of course candy with Halloween or monster themes. Now the Halloween gimmicks are scarce in grocery stores. The box art and the visibility of the actual cupcakes through top of the box makes them eye catching, especially for those of us who are always on the lookout for cool Halloween finds.

Represented in the cupcakes are many facets of the Halloween season. Most noticeable is the orange colored icing in honor of Halloween which is NOT flavored orange, it’s just colored that way. Then, what really seals the deal and gives them the extra Halloween kick is the few candy corns sprinkled on top. The candy corn flavor puts them over the top. It was criminal to see that one cupcake in my box lacked candy corn completely, a glaring flaw that would’ve made me put them down and take another box. Unfortunately, I was in possession of the only box left in Quick Chek. Back to the subtle levels of the cupcake. Much like how The Dude’s rug really brought the room together, hiding secretively underneath the icing is a layer of rich, soft chocolate frosting that is so damn delicious. You don’t expect there to be a coating of chocolate underneath the icing, but when you chomp down on one you’ll be in heaven. The chocolate smothers a moist, golden cupcake that isn’t lost underneath the sweet mound of sugary joy.

Like I said, these won’t help if you’re on a diet or on a strict workout regimen, but they will help keep your sanity. Entenmann’s Halloween cupcakes are one of life’s great pleasures so you don’t have to feel guilty if you only indulge a few times a year! The fact that they only come out during October makes their yearly appearance that much more of an event.