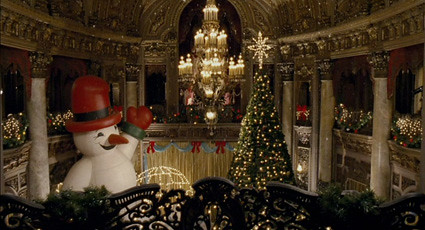 So many people claim they are originally from Jersey, ergo that must mean when someone sings “I’ll Be Home For Christmas,” they really mean they’re going back to Jersey…to Jersey. Queen Latifah is one of those people. She’s a tough chick who was born in Newark, NJ and raised in East Orange, who went ahead and crowned herself the Queen of Hip-Hop. There’s never been any other female hip-hop artist that has been formidable enough to threaten her crown, but what’s funny is that I can only recall one of her songs, which is “U.N.I.T.Y” from 1994. Most of what I know about the former power forward of the Irvington High School girls basketball team, aka Dana Owens, is that she’s become more of a movie star, and unfortunately 2007’s The Perfect Holiday is not one of her better ones. 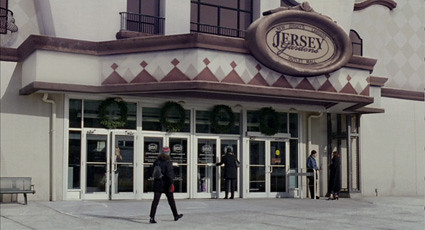 The plot of The Perfect Holiday is trite Christmas fare, something you might see on ABC Family Channel or better yet…Hallmark Channel rather than in theaters. Gabrielle Union (the hot rival cheerleader in Bring It On), shows that she needs several more acting classes to become Julia Roberts or Sandra Bullock who she was attempting to channel in this movie. In her role as Nancy, she plays a mother of 3 who has just separated from her rapper husband. Benjamin (Morris Chestnut) is the guy that swoops in to steal her heart as he’s playing Santa Claus at Jersey Gardens Mall in Elizabeth, NJ. Nancy’s cuter-than-Olivia-Kendall daughter Emily (Khail Bryant) tips Benjamin off that her mom is in need of a compliment. Chestnut’s performance was only forgivable because it was so predictable and cheesy. Charlie Murphy is J-Jizzy, a way less likable P.Diddy sort of hip-hop artist who has left his 3 kids with the hurdle of adjusting to their mother’s new boyfriend (Chestnut). Forget all that, the heavy guy from Couples Retreat, Faizon Love, is the best and funniest part of this movie. 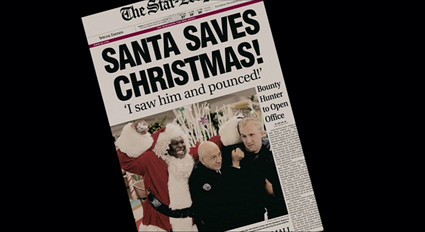 Faizon Love makes the front page of The Star Ledger!

The pace is fast, the editing is terrible, and they crammed pretty much every Christmas song you can think of into every second of the film. Even having the majestic Queen Latifah as one of the producers did not give this film the boost it needed. Latifah’s screen time as “Mrs. Christmas” is minimal, and the dude who wishes he was Don Cheadle, Terrence Howard, also appears as her extremely annoying cohort, Bah Humbug. The film was directed and co-written by Lance “Un” Rivera, the Unentertainment Records CEO and fomer Biggie Smalls collaborator. He also directed another film I’ll be writing about in the future, 2004’s The Cookout.

I can only recommend The Perfect Holiday to those of you who love the actors in the film, as well as to hardcore New Jersey buffs like myself. Our newspaper, The Star-Ledger makes an appearance, and so does tons of crappy looking computer generated snow. In case you decide to go out on a limb and Netflix this steaming lump of coal, you’ve been warned. 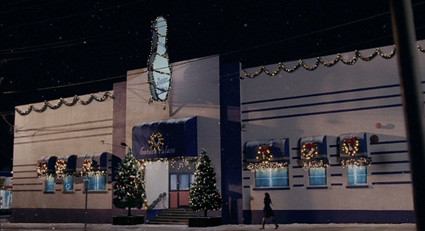 For the last 2 years, my apartment has been haunted.

I’ve tried everything from contracting a couple of local paranormal investigators, to calling in a family friend who is a priest at the church in town to attempt to exorcise the apartment. I am getting desperate now. Everyone I tell about this thinks I’m out of my frigging mind, and I probably am. Ahh, well, I need to get out of this room, out of the apartment, and enjoy the day. There’s no sense in becoming more exasperated. I’ll figure out how to get rid of this thing. **Note to self, I got rid of my Kenner Proton Pack years ago, so don’t think for a second that I’m going to spend hundreds of bucks on eBay to buy a hollow piece of plastic that has no actual ghost catching abilities.** (My future self will thank me for not draining my Paypal account to relive my youth.)

While on an unplanned trip to Jersey Gardens Mall in Elizabeth, NJ, I found this Pac-Man energy drink at the F.Y.E store. I didn’t expect it to taste very good, I had a feeling it would be a generic citrus flavor since Pac-Man is yellow. It turned out that Ben was f-cking WRONG and my insight DID NOT serve me well!

Even though my hopes weren’t high about its flavor, I held off on drinking this sucker until it was properly chilled. After a few hours, I opened my refrigerator door and there were creatures writhing around and they were growling and snarling, and there were flames and I heard a voice say Zuul! OK, so that was Dana Barrett, not me, but there is no Dana Barrett only Zuul.
After exhausting my Ghostbusters quote quota for the day, I actually got around to trying this energy drink. Upon pouring it, I was surprised that the moderately bubbly liquid was a dark pink color and not the Mountain Dewey yellow I’d imagined. My initial sip informed me that the drink was raspberry flavored and only tasted average. It was very sweet, but different enough to set it apart from other typical energy drinks. If you enjoy raspberry or some sort of generic “berry” flavor that the scientists came up with, then you may really dig this.

Pac-Man energy drink is only worth a buy for the novelty factor. The can offers a cool package featuring a graphic of Pac-Man and two ghosts in front of the video games screen. So if you’re one of those people who still has all of their Pac-Man collectibles, cereal box, and bedsheets, then I suggest you hover your round yellow ass over to an F.Y.E store.
Oh and BTW, the Pac-Man energy drink IS actually good for one thing…I just ate a shitload of ghosts that were hanging around my apartment!
www.SexyArmpit.com